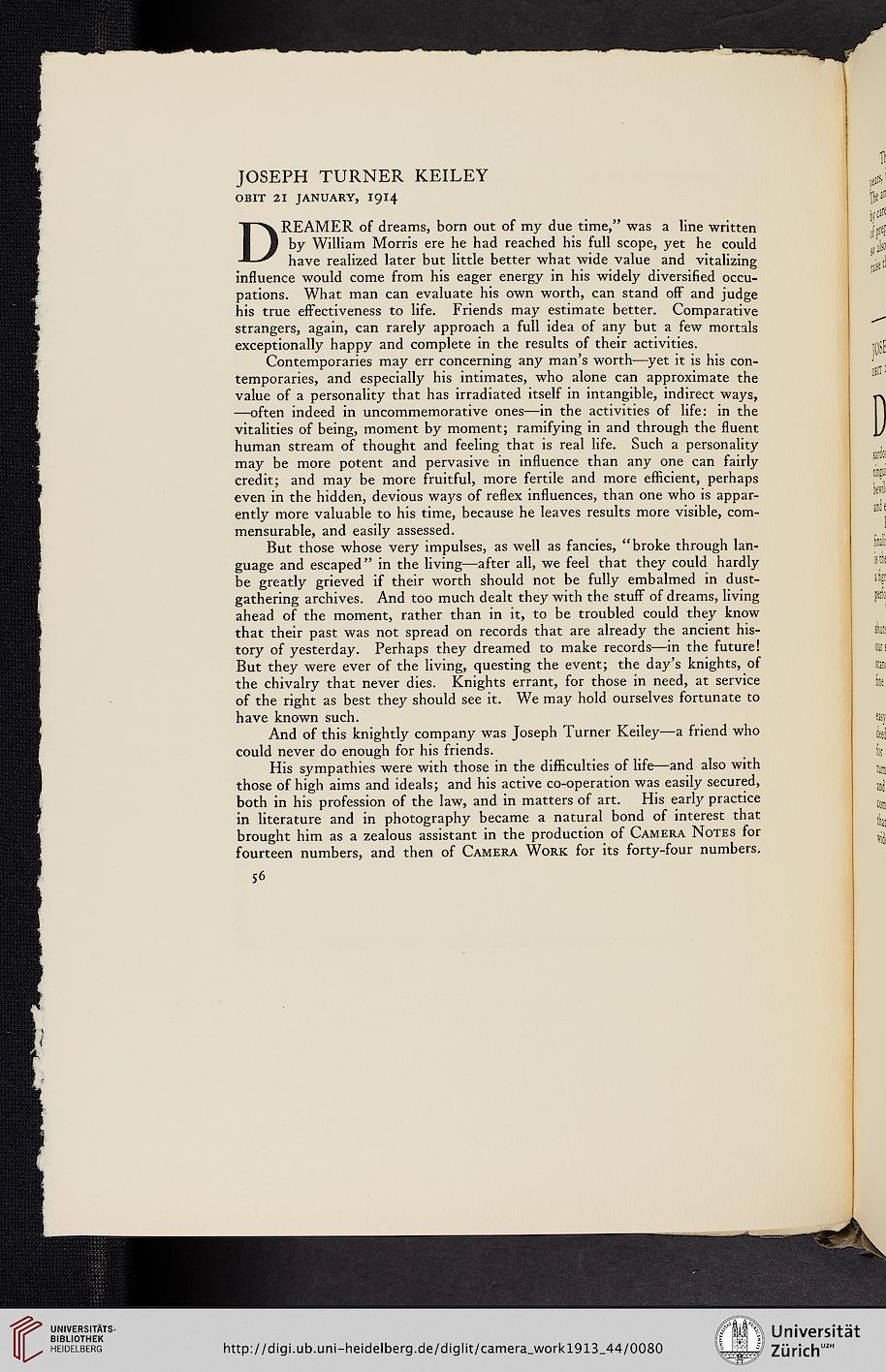 Hinweise zum OCR-Text
JOSEPH TURNER KEILEY
OBIT 21 JANUARY, I9I4
DREAMER of dreams, born out of my due time,” was a line written
by William Morris ere he had reached his full scope, yet he could
have realized later but little better what wide value and vitalizing
influence would come from his eager energy in his widely diversified occu-
pations. What man can evaluate his own worth, can stand off* and judge
his true effectiveness to life. Friends may estimate better. Comparative
strangers, again, can rarely approach a full idea of any but a few mortals
exceptionally happy and complete in the results of their activities.
Contemporaries may err concerning any man’s worth—yet it is his con-
temporaries, and especially his intimates, who alone can approximate the
value of a personality that has irradiated itself in intangible, indirect ways,
—often indeed in uncommemorative ones—in the activities of life: in the
vitalities of being, moment by moment; ramifying in and through the fluent
human stream of thought and feeling that is real life. Such a personality
may be more potent and pervasive in influence than any one can fairly
credit; and may be more fruitful, more fertile and more efficient, perhaps
even in the hidden, devious ways of reflex influences, than one who is appar-
ently more valuable to his time, because he leaves results more visible, com-
mensurable, and easily assessed.
But those whose very impulses, as well as fancies, “broke through lan-
guage and escaped” in the living—after all, we feel that they could hardly
be greatly grieved if their worth should not be fully embalmed in dust-
gathering archives. And too much dealt they with the stuff of dreams, living
ahead of the moment, rather than in it, to be troubled could they know
that their past was not spread on records that are already the ancient his-
tory of yesterday. Perhaps they dreamed to make records—in the future!
But they were ever of the living, questing the event; the day’s knights, of
the chivalry that never dies. Knights errant, for those in need, at service
of the right as best they should see it. We may hold ourselves fortunate to
have known such.
And of this knightly company was Joseph Turner Keiley—a friend who
could never do enough for his friends.
His sympathies were with those in the difficulties of life—and also with
those of high aims and ideals; and his active co-operation was easily secured,
both in his profession of the law, and in matters of art. His early practice
in literature and in photography became a natural bond of interest that
brought him as a zealous assistant in the production of Camera Notes for
fourteen numbers, and then of Camera Work for its forty-four numbers.
56