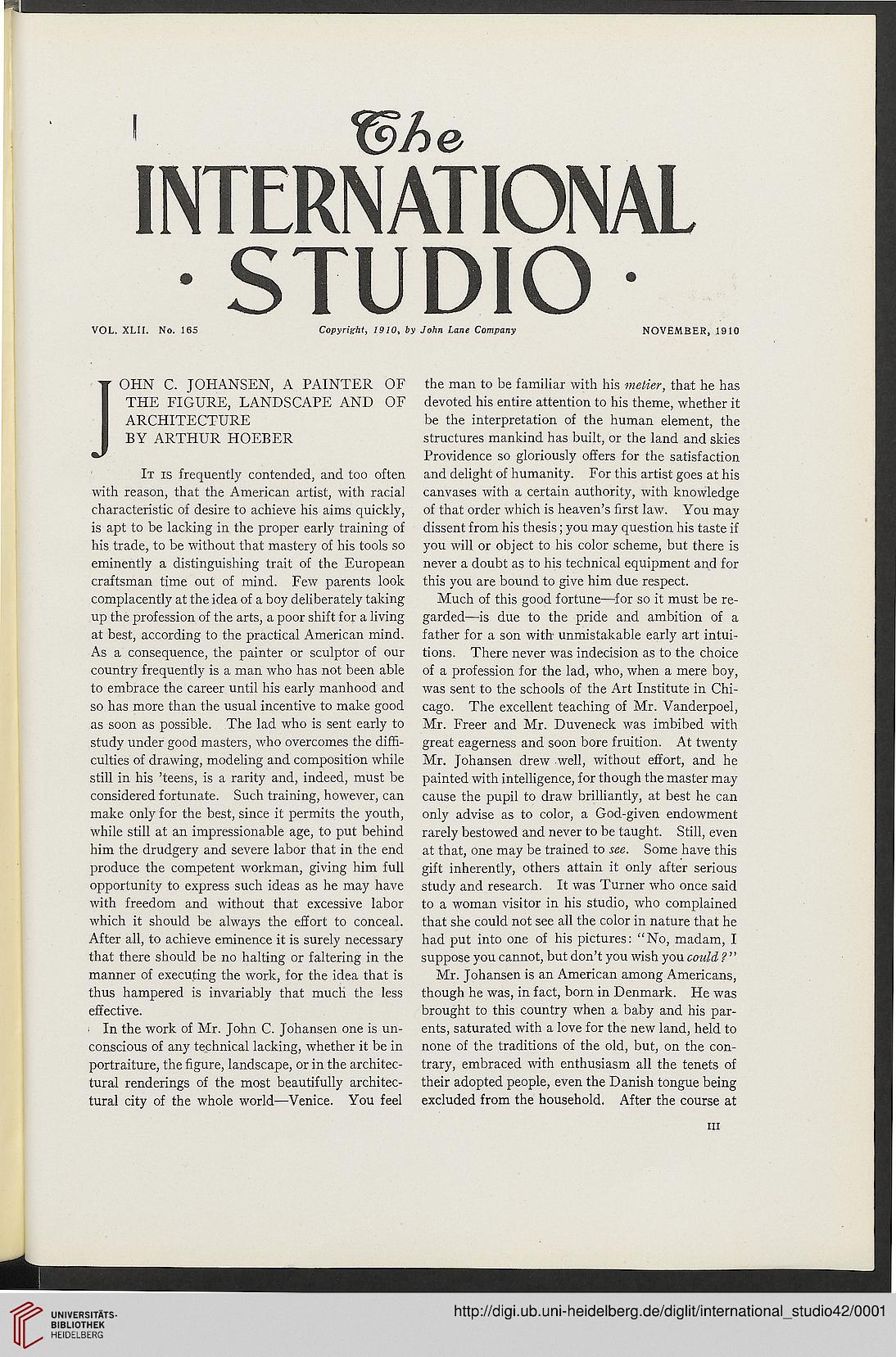 JOHN C. JOHANSEN, A PAINTER OF
THE FIGURE, LANDSCAPE AND OF
ARCHITECTURE
BY ARTHUR HOEBER

It is frequently contended, and too often
with reason, that the American artist, with racial
characteristic of desire to achieve his aims quickly,
is apt to be lacking in the proper early training of
his trade, to be without that mastery of his tools so
eminently a distinguishing trait of the European
craftsman time out of mind. Few parents look
complacently at the idea of a boy deliberately taking
up the profession of the arts, a poor shift for a living
at best, according to the practical American mind.
As a consequence, the painter or sculptor of our
country frequently is a man who has not been able
to embrace the career until his early manhood and
so has more than the usual incentive to make good
as soon as possible. The lad who is sent early to
study under good masters, who overcomes the diffi-
culties of drawing, modeling and composition while
still in his 'teens, is a rarity and, indeed, must be
considered fortunate. Such training, however, can
make only for the best, since it permits the youth,
while still at an impressionable age, to put behind
him the drudgery and severe labor that in the end
produce the competent workman, giving him full
opportunity to express such ideas as he may have
with freedom and without that excessive labor
which it should be always the effort to conceal.
After all, to achieve eminence it is surely necessary
that there should be no halting or faltering in the
manner of executing the work, for the idea that is
thus hampered is invariably that much the less
effective.

In the work of Mr. John C. Johansen one is un-
conscious of any technical lacking, whether it be in
portraiture, the figure, landscape, or in the architec-
tural renderings of the most beautifully architec-
tural city of the whole world—Venice. You feel

the man to be familiar with his metier, that he has
devoted his entire attention to his theme, whether it
be the interpretation of the human element, the
structures mankind has built, or the land and skies
Providence so gloriously offers for the satisfaction
and delight of humanity. For this artist goes at his
canvases with a certain authority, with knowledge
of that order which is heaven's first law. You may
dissent from his thesis; you may question his taste if
you will or object to his color scheme, but there is
never a doubt as to his technical equipment and for
this you are bound to give him due respect.

Much of this good fortune—for so it must be re-
garded—is due to the pride and ambition of a
father for a son with unmistakable early art intui-
tions. There never was indecision as to the choice
of a profession for the lad, who, when a mere boy,
was sent to the schools of the Art Institute in Chi-
cago. The excellent teaching of Mr. Vanderpoel,
Mr. Freer and Mr. Duveneck was imbibed with
great eagerness and soon bore fruition. At twenty
Mr. Johansen drew well, without effort, and he
painted with intelligence, for though the master may
cause the pupil to draw brilliantly, at best he can
only advise as to color, a God-given endowment
rarely bestowed and never to be taught. Still, even
at that, one may be trained to see. Some have this
gift inherently, others attain it only after serious
study and research. It was Turner who once said
to a woman visitor in his studio, who complained
that she could not see all the color in nature that he
had put into one of his pictures: "No, madam, I
suppose you cannot, but don't you wish you could ?"

Mr. Johansen is an American among Americans,
though he was, in fact, born in Denmark. He was
brought to this country when a baby and his par-
ents, saturated with a love for the new land, held to
none of the traditions of the old, but, on the con-
trary, embraced with enthusiasm all the tenets of
their adopted people, even the Danish tongue being
excluded from the household. After the course at