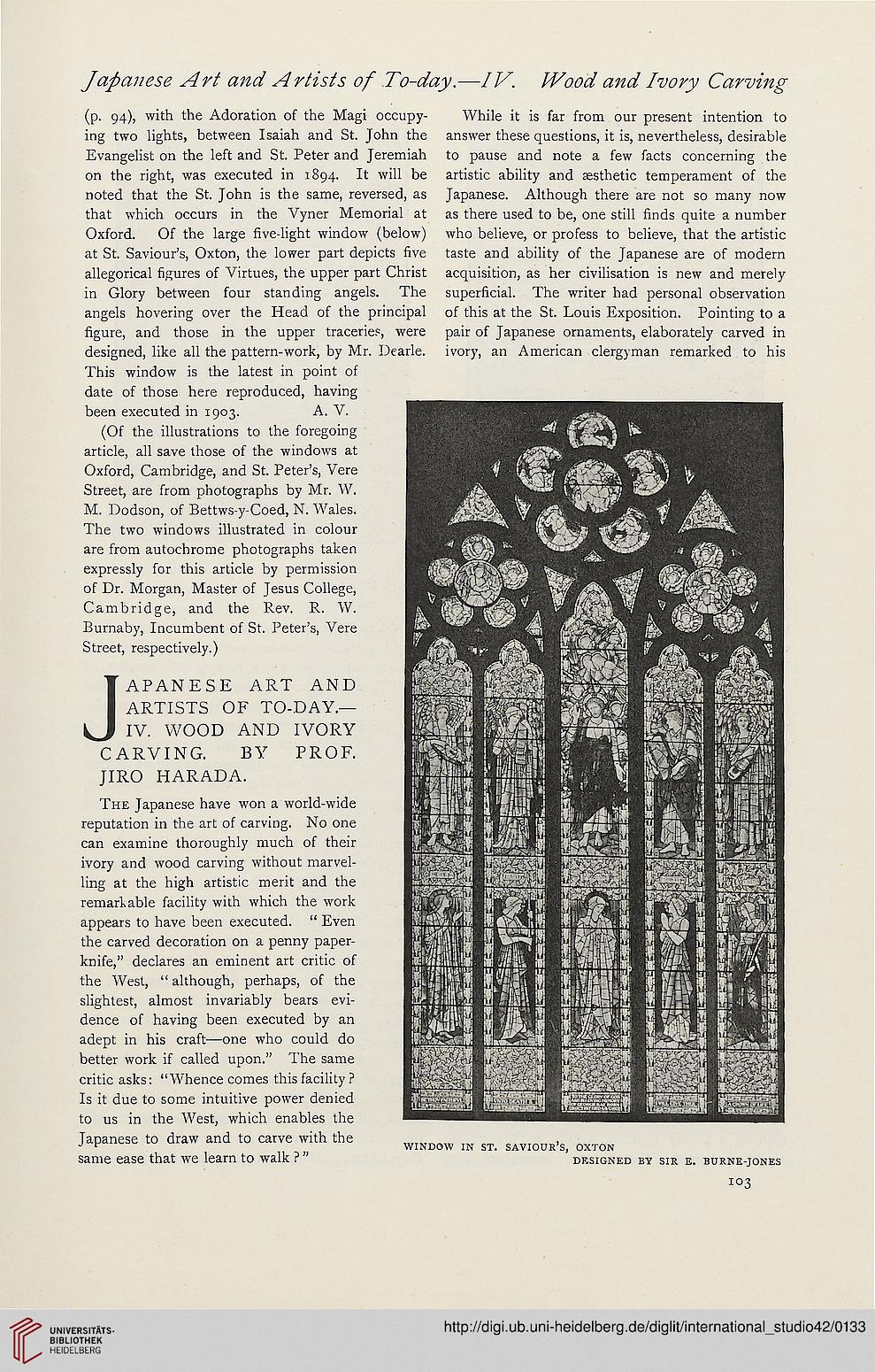 (p. 94), with the Adoration of the Magi occupy- While it is far from our present intention to
ing two lights, between Isaiah and St. John the answer these questions, it is, nevertheless, desirable
Evangelist on the left and St. Peter and Jeremiah to pause and note a few facts concerning the
on the right, was executed in 1894. It will be artistic ability and aesthetic temperament of the
noted that the St. John is the same, reversed, as Japanese. Although there are not so many now
that which occurs in the Vyner Memorial at as there used to be, one still finds quite a number
Oxford. Of the large five-light window (below) who believe, or profess to believe, that the artistic
at St. Saviour's, Oxton, the lower part depicts five taste and ability of the Japanese are of modern
allegorical figures of Virtues, the upper part Christ acquisition, as her civilisation is new and merely
in Glory between four standing angels. The superficial. The writer had personal observation
angels hovering over the Head of the principal of this at the St. Louis Exposition. Pointing to a
figure, and those in the upper traceries, were pair of Japanese ornaments, elaborately carved in
designed, like all the pattern-work, by Mr. Dearie, ivory, an American clergyman remarked to his
This window is the latest in point of
date of those here reproduced, having
been executed in 1903. A. V.

(Of the illustrations to the foregoing
article, all save those of the windows at
Oxford, Cambridge, and St. Peter's, Vere
Street, are from photographs by Mr. W.
M. Dodson, of Bettws-y-Coed, N. Wales.
The two windows illustrated in colour
are from autochrome photographs taken
expressly for this article by permission
of Dr. Morgan, Master of Jesus College,
Cambridge, and the Rev. R. W.
Burnaby, Incumbent of St. Peter's, Vere
Street, respectively.)

The Japanese have won a world-wide
reputation in the art of carving. No one
can examine thoroughly much of their
ivory and wood carving without marvel-
ling at the high artistic merit and the
remarkable facility with which the work
appears to have been executed. " Even
the carved decoration on a penny paper-
knife," declares an eminent art critic of
the West, "although, perhaps, of the
slightest, almost invariably bears evi-
dence of having been executed by an
adept in his craft—one who could do
better work if called upon." The same
critic asks: "Whence comes this facility ?
Is it due to some intuitive power denied
to us in the West, which enables the
Japanese to draw and to carve with the , ■

same ease that we learn to walk ? " designed by sir e. burne-jones