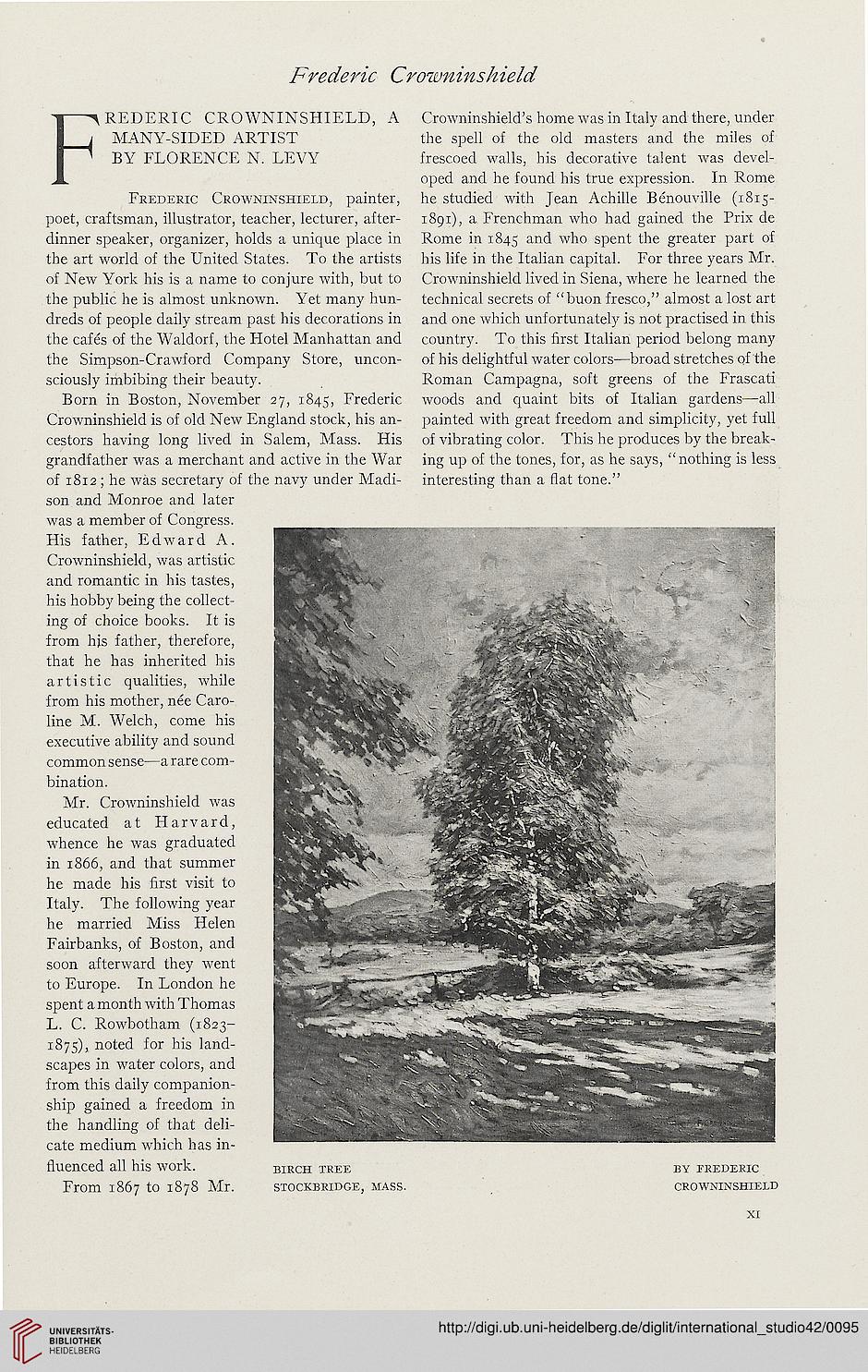 FREDERIC CROWNINSHIELD, A Crowninshield's home was in Italy and there, under
MANY-SIDED ARTIST the spell of the old masters and the miles of

oped and he found his true expression. In Rome
Frederic Crowninshield, painter, he studied with Jean Achille Benouville (1815-
poet, craftsman, illustrator, teacher, lecturer, after- 1891), a Frenchman who had gained the Prix de
dinner speaker, organizer, holds a unique place in Rome in 1845 and who spent the greater part of
the art world of the United States. To the artists his life in the Italian capital. For three years Mr.
of New York his is a name to conjure with, but to Crowninshield lived in Siena, where he learned the
the public he is almost unknown. Yet many hun- technical secrets of "buon fresco," almost a lost art
dreds of people daily stream past his decorations in and one which unfortunately is not practised in this
the cafes of the Waldorf, the Hotel Manhattan and country. To this first Italian period belong many
the Simpson-Crawford Company Store, uncon- of his delightful water colors—broad stretches of the
sciously imbibing their beauty. Roman Campagna, soft greens of the Frascati

Born in Boston, November 27, 1845, Frederic woods and quaint bits of Italian gardens—all
Crowninshield is of old New England stock, his an- painted with great freedom and simplicity, yet full
cestors having long lived in Salem, Mass. His of vibrating color. This he produces by the break-
grandfather was a merchant and active in the War ing up of the tones, for, as he says, "nothing is less
of 1812; he was secretary of the navy under Madi- interesting than a flat tone."
son and Monroe and later
was a member of Congress.
His father, Edward A.
Crowninshield, was artistic
and romantic in his tastes,
his hobby being the collect-
ing of choice books. It is
from his father, therefore,
that he has inherited his
artistic qualities, while
from his mother, nee Caro-
line M. Welch, come his
executive ability and sound
common sense—a rare com-
bination.

Mr. Crowninshield was
educated at Harvard,
whence he was graduated
in 1866, and that summer
he made his first visit to
Italy. The following year
he married Miss Helen
Fairbanks, of Boston, and
soon afterward they went
to Europe. In London he
spent a month with Thomas
L. C. Rowbotham (1823-
1875), noted for his land-
scapes in water colors, and
from this daily companion-
ship gained a freedom in
the handling of that deli-
cate medium which has in-
fluenced all his work. birch tree by erederic
From 1867 to 1878 Mr. stockbridge, mass. crowninshield