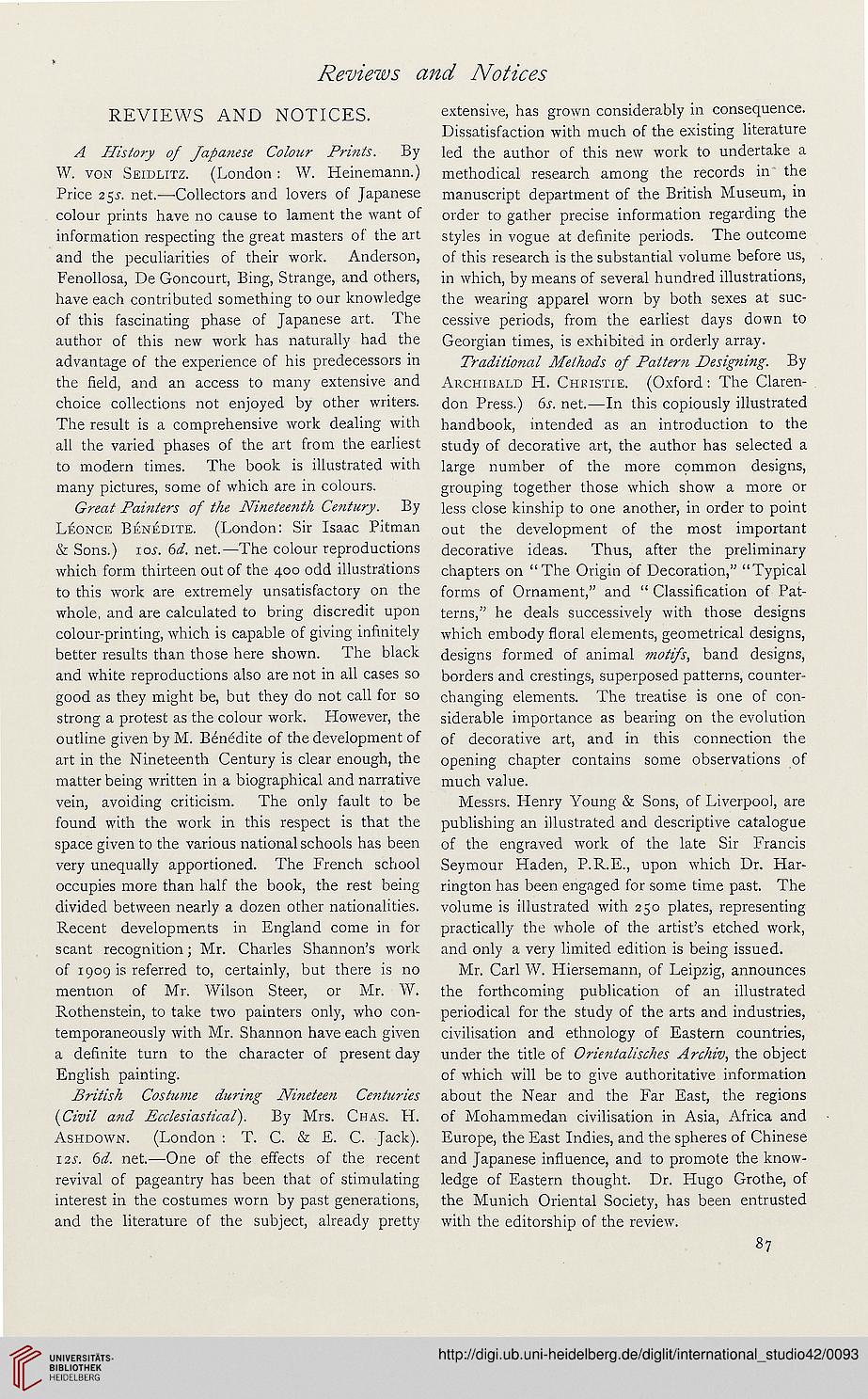 A Hisi07-y of Japanese Colour Prints. By
W. von Seidlitz. (London : W. Heinemann.)
Price 253-. net.—Collectors and lovers of Japanese
colour prints have no cause to lament the want of
information respecting the great masters of the art
and the peculiarities of their work. Anderson,
Fenollosa, De Goncourt, Bing, Strange, and others,
have each contributed something to our knowledge
of this fascinating phase of Japanese art. The
author of this new work has naturally had the
advantage of the experience of his predecessors in
the field, and an access to many extensive and
choice collections not enjoyed by other writers.
The result is a comprehensive work dealing with
all the varied phases of the art from the earliest
to modern times. The book is illustrated with
many pictures, some of which are in colours.

Great Painters of the Nineteetith Century. By
Leonce Benedite. (London: Sir Isaac Pitman
& Sons.) io.f. 6d. net.—The colour reproductions
which form thirteen out of the 400 odd illustrations
to this work are extremely unsatisfactory on the
whole, and are calculated to bring discredit upon
colour-printing, which is capable of giving infinitely
better results than those here shown. The black
and white reproductions also are not in all cases so
good as they might be, but they do not call for so
strong a protest as the colour work. However, the
outline given by M. Benedite of the development of
art in the Nineteenth Century is clear enough, the
matter being written in a biographical and narrative
vein, avoiding criticism. The only fault to be
found with the work in this respect is that the
space given to the various national schools has been
very unequally apportioned. The French school
occupies more than half the book, the rest being
divided between nearly a dozen other nationalities.
Recent developments in England come in for
scant recognition; Mr. Charles Shannon's work
of 1909 is referred to, certainly, but there is no
mention of Mr. Wilson Steer, or Mr. W.
Rothenstein, to take two painters only, who con-
temporaneously with Mr. Shannon have each given
a definite turn to the character of present day
English painting.

British Costume during Nineteen Centuries
{Civil and Ecclesiastical). By Mrs. Chas. H.
Ashdown. (London : T. C. & E. C. Jack).
125. 6d. net.—One of the effects of the recent
revival of pageantry has been that of stimulating
interest in the costumes worn by past generations,
and the literature of the subject, already pretty

extensive, has grown considerably in consequence.
Dissatisfaction with much of the existing literature
led the author of this new work to undertake a
methodical research among the records in the
manuscript department of the British Museum, in
order to gather precise information regarding the
styles in vogue at definite periods. The outcome
of this research is the substantial volume before us,
in which, by means of several hundred illustrations,
the wearing apparel worn by both sexes at suc-
cessive periods, from the earliest days down to
Georgian times, is exhibited in orderly array.

Traditional Methods of Pattern Designing. By
Archibald H. Christie. (Oxford: The Claren-
don Press.) 6.r. net.—In this copiously illustrated
handbook, intended as an introduction to the
study of decorative art, the author has selected a
large number of the more common designs,
grouping together those which show a more or
less close kinship to one another, in order to point
out the development of the most important
decorative ideas. Thus, after the preliminary
chapters on "The Origin of Decoration," "Typical
forms of Ornament," and " Classification of Pat-
terns," he deals successively with those designs
which embody floral elements, geometrical designs,
designs formed of animal motifs, band designs,
borders and crestings, superposed patterns, counter-
changing elements. The treatise is one of con-
siderable importance as bearing on the evolution
of decorative art, and in this connection the
opening chapter contains some observations of
much value.

Messrs. Henry Young & Sons, of Liverpool, are
publishing an illustrated and descriptive catalogue
of the engraved work of the late Sir Francis
Seymour Haden, P.R.E., upon which Dr. Har-
rington has been engaged for some time past. The
volume is illustrated with 250 plates, representing
practically the whole of the artist's etched work,
and only a very limited edition is being issued.

Mr. Carl W. Hiersemann, of Leipzig, announces
the forthcoming publication of an illustrated
periodical for the study of the arts and industries,
civilisation and ethnology of Eastern countries,
under the title of Orientalisches Archiv, the object
of which will be to give authoritative information
about the Near and the Far East, the regions
of Mohammedan civilisation in Asia, Africa and
Europe, the East Indies, and the spheres of Chinese
and Japanese influence, and to promote the know-
ledge of Eastern thought. Dr. Hugo Grothe, of
the Munich Oriental Society, has been entrusted
with the editorship of the review.