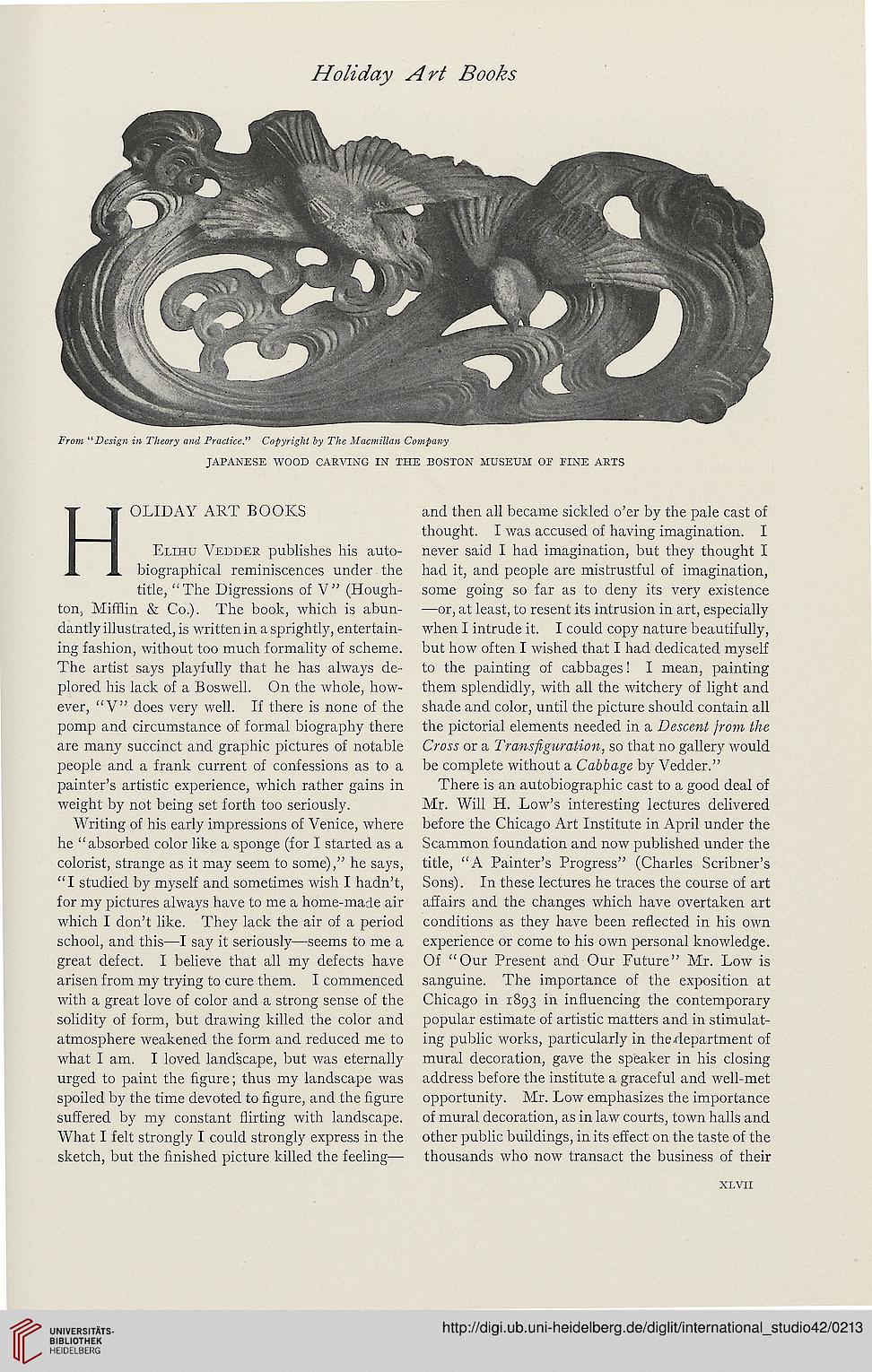 From "Design in Theory and Practice" Copyright by The Macmillan Company

japanese wood carving in the boston museum of fine arts

HOLIDAY ART BOOKS and then all became sickled o'er by the pale cast of
thought. I was accused of having imagination. I

Elihu Vedder publishes his auto- never said I had imagination, but they thought I

biographical reminiscences under the had it, and people are mistrustful of imagination,

title, "The Digressions of V" (Hough- some going so far as to deny its very existence

ton, Mifflin & Co.). The book, which is abun- —or, at least, to resent its intrusion in art, especially

dantly illustrated, is written in a sprightly, entertain- when I intrude it. I could copy nature beautifully,

ing fashion, without too much formality of scheme, but how often I wished that I had dedicated myself

The artist says playfully that he has always de- to the painting of cabbages! I mean, painting

plored his lack of a Boswell. On the whole, how- them splendidly, with all the witchery of light and

ever, "V" does very well. If there is none of the shade and color, until the picture should contain all

are many succinct and graphic pictures of notable Cross or a Transfiguration, so that no gallery would

people and a frank current of confessions as to a be complete without a Cabbage by Vedder."

painter's artistic experience, which rather gains in There is an autobiographic cast to a good deal of

weight by not being set forth too seriously. Mr. Will H. Low's interesting lectures delivered

Writing of his early impressions of Venice, where before the Chicago Art Institute in April under the

colorist, strange as it may seem to some)," he says, title, "A Painter's Progress" (Charles Scribner's

"I studied by myself and sometimes wish I hadn't, Sons). In these lectures he traces the course of art

which I don't like. They lack the air of a period conditions as they have been reflected in his own

school, and this—I say it seriously—seems to me a experience or come to his own personal knowledge,

great defect. I believe that all my defects have Of "Our Present and Our Future" Mr. Low is

arisen from my trying to cure them. I commenced sanguine. The importance of the exposition at

solidity of form, but drawing killed the color and popular estimate of artistic matters and in stimulat-

atmosphere weakened the form and reduced me to ing public works, particularly in the department of

what I am. I loved landscape, but was eternally mural decoration, gave the speaker in his closing

urged to paint the figure; thus my landscape was address before the institute a graceful and well-met

spoiled by the time devoted to figure, and the figure opportunity. Mr. Low emphasizes the importance

suffered by my constant flirting with landscape, of mural decoration, as in law courts, town halls and

What I felt strongly I could strongly express in the other public buildings, in its effect on the taste of the

sketch, but the finished picture killed the feeling— thousands who now transact the business of their