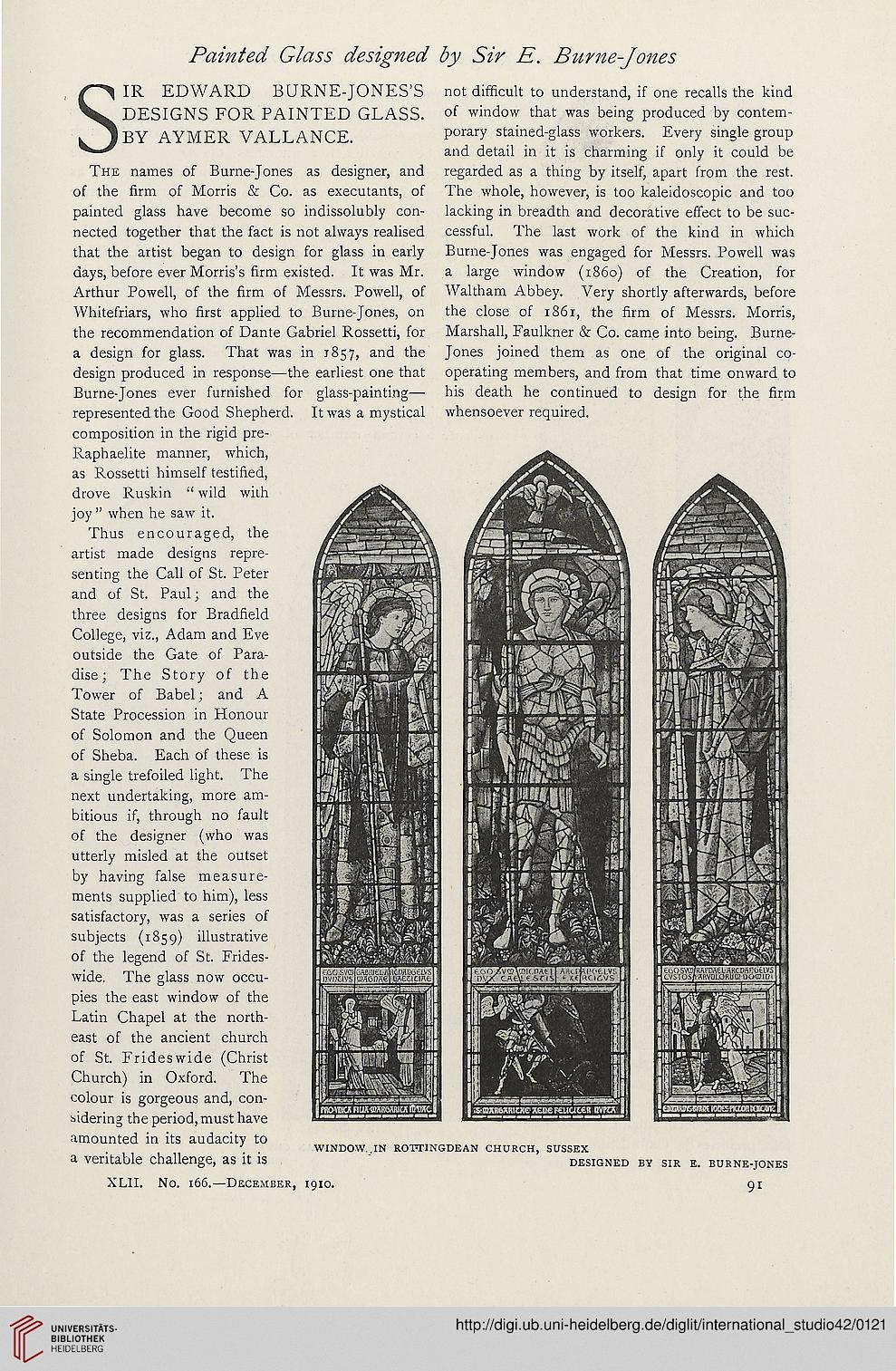 SIR EDWARD BURNE-JONES'S not difficult to understand, if one recalls the kind
DESIGNS FOR PAINTED GLASS, of window that was being produced by contem-
BY AYMER VALLANCE. porary stained-glass workers. Every single group

and detail in it is charming if only it could be
The names of Burne-Jones as designer, and regarded as a thing by itself, apart from the rest,
of the firm of Morris & Co. as executants, of The whole, however, is too kaleidoscopic and too
painted glass have become so indissolubly con- lacking in breadth and decorative effect to be suc-
nected together that the fact is not always realised cessful. The last work of the kind in which
that the artist began to design for glass in early Burne-Jones was engaged for Messrs. Powell was
days, before ever Morris's firm existed. It was Mr. a large window (i860) of the Creation, for
Arthur Powell, of the firm of Messrs. Powell, of Waltham Abbey. Very shortly afterwards, before
Whitefriars, who first applied to Burne-Jones, on the close of 1861, the firm of Messrs. Morris,
the recommendation of Dante Gabriel Rossetti, for Marshall, Faulkner & Co. came into being. Burne-
a design for glass. That was in 1857, and the Jones joined them as one of the original co-
design produced in response—the earliest one that operating members, and from that time onward to
Burne-Jones ever furnished for glass-painting— his death he continued to design for the firm
represented the Good Shepherd. It was a mystical whensoever required,
composition in the rigid pre-
Raphaelite manner, which,
as Rossetti himself testified,
drove Ruskin " wild with
joy " when he saw it.

Thus encouraged, the
artist made designs repre-
senting the Call of St. Peter
and of St. Paul; and the
three designs for Bradfield
College, viz., Adam and Eve
outside the Gate of Para-
dise; The Story of the
Tower of Babel; and A
State Procession in Honour
of Solomon and the Queen
of Sheba. Each of these is
a single trefoiled light. The
next undertaking, more am-
bitious if, through no fault
of the designer (who was
utterly misled at the outset
by having false measure-
ments supplied to him), less
satisfactory, was a series of
subjects (1859) illustrative
of the legend of St. Frides-

pies the east window of the
Latin Chapel at the north-
east of the ancient church
of St. Frideswide (Christ
Church) in Oxford. The
colour is gorgeous and, con-
sidering the period, must have
amounted in its audacity to

a veritable challenge, as it is designed by sir e. burne-jones