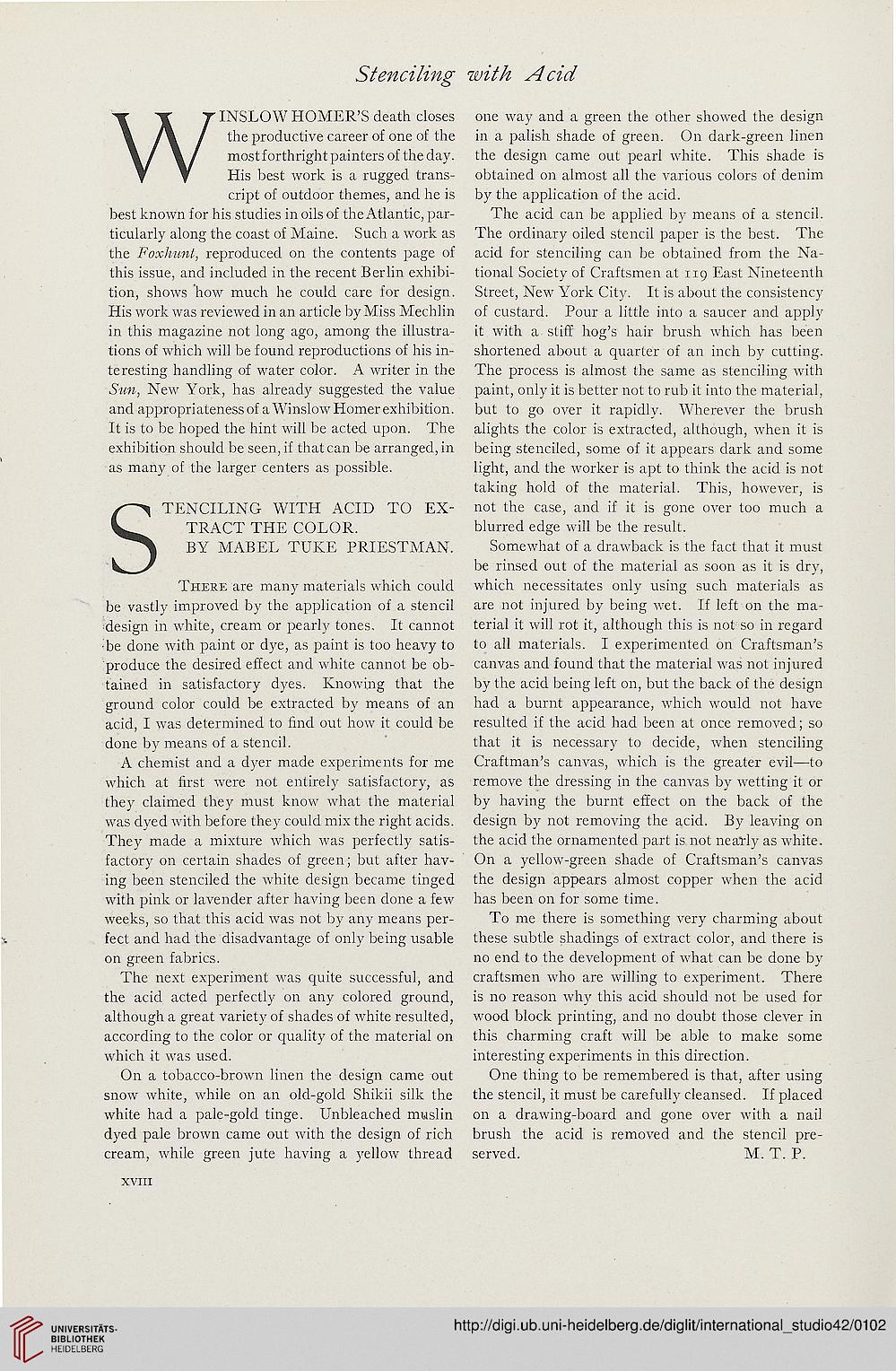 the productive career of one of the in a palish shade of green. On dark-green linen

most forthright painters of the day. the design came out pearl white. This shade is

cript of outdoor themes, and he is by the application of the acid,

best known for his studies in oils of the Atlantic, par- The acid can be applied by means of a stencil,

ticularly along the coast of Maine. Such a work as The ordinary oiled stencil paper is the best. The

the Foxhunt, reproduced on the contents page of acid for stenciling can be obtained from the Na-

this issue, and included in the recent Berlin exhibi- tional Society of Craftsmen at 119 East Nineteenth

tion, shows how much he could care for design. Street, New York City. It is about the consistency

His work was reviewed in an article by Miss Mechlin of custard. Pour a little into a saucer and apply

in this magazine not long ago, among the illustra- it with a stiff hog's hair brush which has been

tions of which will be found reproductions of his in- shortened about a quarter of an inch by cutting,

teresting handling of water color. A writer in the The process is almost the same as stenciling with

Sun, New York, has already suggested the value paint, only it is better not to rub it into the material,

and appropriateness of a Winslow Homer exhibition, but to go over it rapidly. Wherever the brush

It is to be hoped the hint will be acted upon. The alights the color is extracted, although, when it is

exhibition should be seen, if that can be arranged, in being stenciled, some of it appears dark and some

as many of the larger centers as possible. light, and the worker is apt to think the acid is not

taking hold of the material. This, however, is

STENCILING WITH ACID TO EX- not the case, and if it is gone over too much a
TRACT THE COLOR. blurred edge will be the result.
BY MABEL TUKE PRIESTMAN. Somewhat of a drawback is the fact that it must
be rinsed out of the material as soon as it is dry,
There are many materials which could which necessitates only using such materials as
be vastly improved by the application of a stencil are not injured by being wet. If left on the ma-
design in white, cream or pearly tones. It cannot terial it will rot it, although this is not so in regard
•be done with paint or dye, as paint is too heavy to to all materials. I experimented on Craftsman's
produce the desired effect and white cannot be ob- canvas and found that the material was not injured
tained in satisfactory dyes. Knowing that the by the acid being left on, but the back of the design
ground color could be extracted by means of an had a burnt appearance, which would not have
acid, I was determined to find out how it could be resulted if the acid had been at once removed; so
done by means of a stencil. that it is necessary to decide, when stenciling
A chemist and a dyer made experiments for me Craftman's canvas, which is the greater evil—to
which at first were not entirely satisfactory, as remove the dressing in the canvas by wetting it or
they claimed they must know what the material by having the burnt effect on the back of the
was dyed with before they could mix the right acids, design by not removing the acid. By leaving on
They made a mixture which was perfectly satis- the acid the ornamented part is not nearly as white,
factory on certain shades of green; but after hav- On a yellow-green shade of Craftsman's canvas
ing been stenciled the white design became tinged the design appears almost copper when the acid
with pink or lavender after having been done a few has been on for some time.

weeks, so that this acid was not by any means per- To me there is something very charming about

feet and had the disadvantage of only being usable these subtle shadings of extract color, and there is

on green fabrics. no end to the development of what can be done by

The next experiment was quite successful, and craftsmen who are willing to experiment. There

the acid acted perfectly on any colored ground, is no reason why this acid should not be used for

although a great variety of shades of white resulted, wood block printing, and no doubt those clever in

which it was used. interesting experiments in this direction.

On a tobacco-brown linen the design came out One thing to be remembered is that, after using

snow white, while on an old-gold Shikii silk the the stencil, it must be carefully cleansed. If placed

white had a pale-gold tinge. Unbleached muslin on a drawing-board and gone over with a nail