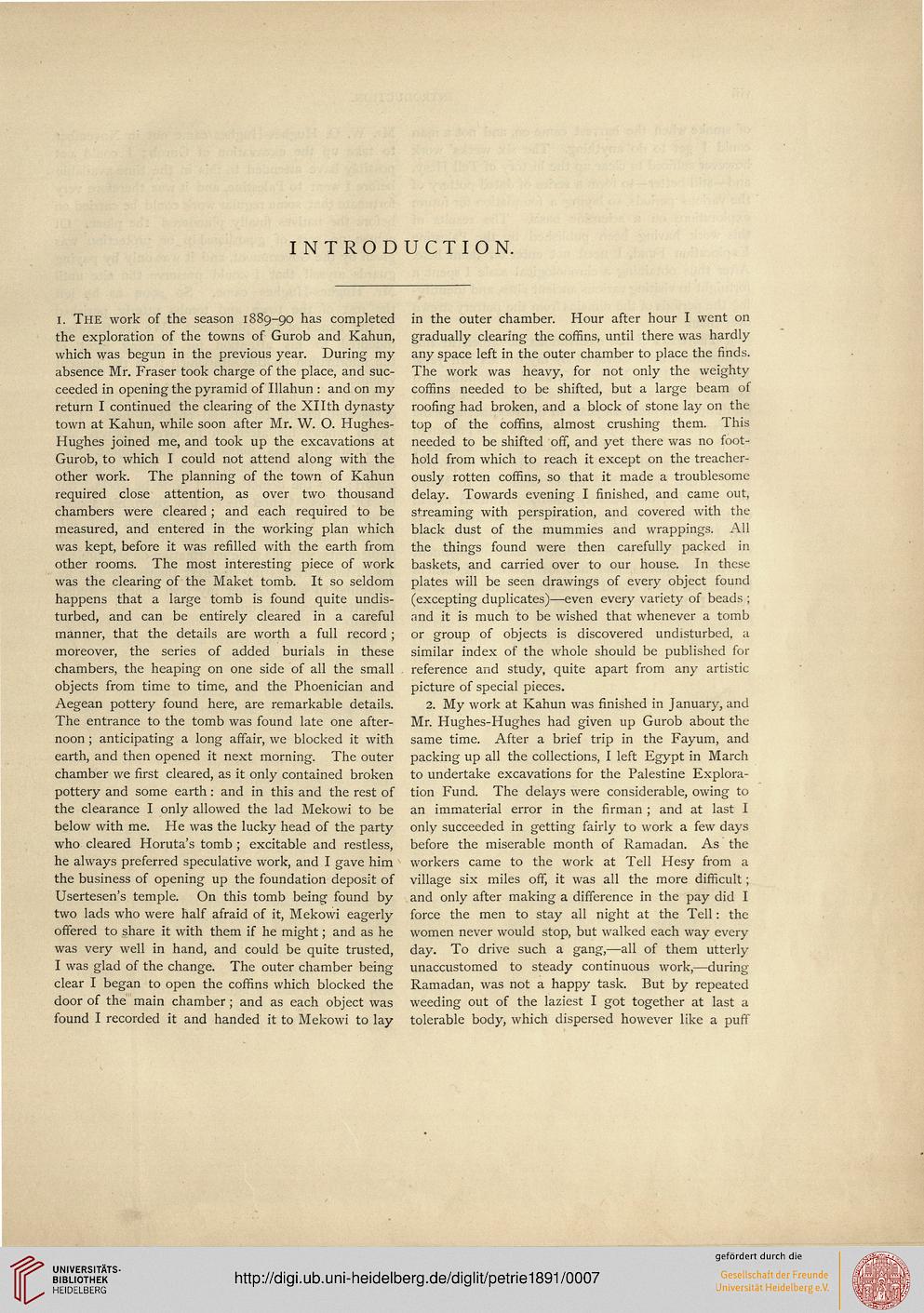 i. The work of the season 1889-90 has completed
the exploration of the towns of Gurob and Kahun,
which was begun in the previous year. During my
absence Mr. Fraser took charge of the place, and suc-
ceeded in opening the pyramid of Illahun : and on my
return I continued the clearing of the Xllth dynasty
town at Kahun, while soon after Mr. W. O. Hughes-
Hughes joined me, and took up the excavations at
Gurob, to which I could not attend along with the
other work. The planning of the town of Kahun
required close attention, as over two thousand
chambers were cleared; and each required to be
measured, and entered in the working plan which
was kept, before it was refilled with the earth from
other rooms. The most interesting piece of work
was the clearing of the Maket tomb. It so seldom
happens that a large tomb is found quite undis-
turbed, and can be entirely cleared in a careful
manner, that the details are worth a full record;
moreover, the series of added burials in these
chambers, the heaping on one side of all the small
objects from time to time, and the Phoenician and
Aegean pottery found here, are remarkable details.
The entrance to the tomb was found late one after-
noon ; anticipating a long affair, we blocked it with
earth, and then opened it next morning. The outer
chamber we first cleared, as it only contained broken
pottery and some earth: and in this and the rest of
the clearance I only allowed the lad Mekowi to be
below with me. He was the lucky head of the party
who cleared Horuta's tomb ; excitable and restless,
he always preferred speculative work, and I gave him
the business of opening up the foundation deposit of
Usertesen's temple. On this tomb being found by
two lads who were half afraid of it, Mekowi eagerly
offered to share it with them if he might; and as he
was very well in hand, and could be quite trusted,
I was glad of the change. The outer chamber being
clear I began to open the coffins which blocked the
door of the main chamber; and as each object was
found I recorded it and handed it to Mekowi to lay

in the outer chamber. Hour after hour I went on
gradually clearing the coffins, until there was hardly
any space left in the outer chamber to place the finds.
The work was heavy, for not only the weighty
coffins needed to be shifted, but a large beam of
roofing had broken, and a block of stone lay on the
top of the coffins, almost crushing them. This
needed to be shifted off, and yet there was no foot-
hold from which to reach it except on the treacher-
ously rotten coffins, so that it made a troublesome
delay. Towards evening I finished, and came out,
streaming with perspiration, and covered with the
black dust of the mummies and wrappings. All
the things found were then carefully packed in
baskets, and carried over to our house. In these
plates will be seen drawings of every object found
(excepting duplicates)—even every variety of beads ;
and it is much to be wished that whenever a tomb
or group of objects is discovered undisturbed, a
similar index of the whole should be published for
reference and study, quite apart from any artistic
picture of special pieces.

2. My work at Kahun was finished in January, and
Mr. Hughes-Hughes had given up Gurob about the
same time. After a brief trip in the Fayum, and
packing up all the collections, I left Egypt in March
to undertake excavations for the Palestine Explora-
tion Fund. The delays were considerable, owing to
an immaterial error in the firman ; and at last I
only succeeded in getting fairly to work a few days
before the miserable month of Ramadan. As the
workers came to the work at Tell Hesy from a
village six miles off, it was all the more difficult;
and only after making a difference in the pay did I
force the men to stay all night at the Tell: the
women never would stop, but walked each way every
day. To drive such a gang,—all of them utterly
unaccustomed to steady continuous work,—during
Ramadan, was not a happy task. But by repeated
weeding out of the laziest I got together at last a
tolerable body, which dispersed however like a puff