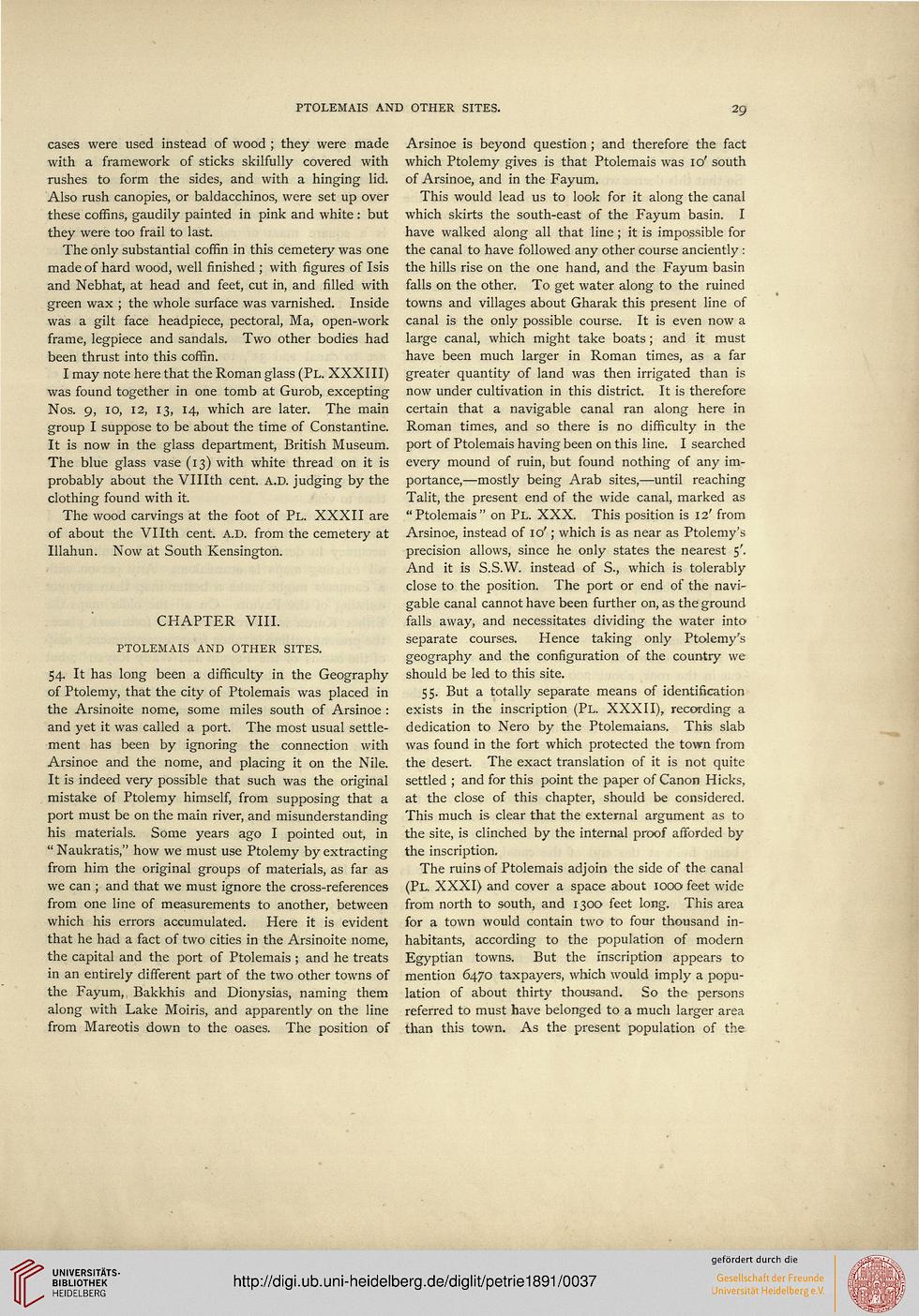 cases were used instead of wood ; they were made
with a framework of sticks skilfully covered with
rushes to form the sides, and with a hinging lid.
Also rush canopies, or baldacchinos, were set up over
these coffins, gaudily painted in pink and white: but
they were too frail to last.

The only substantial coffin in this cemetery was one
made of hard wood, well finished ; with figures of Isis
and Nebhat, at head and feet, cut in, and filled with
green wax ; the whole surface was varnished. Inside
was a gilt face headpiece, pectoral, Ma, open-work
frame, legpiece and sandals. Two other bodies had
been thrust into this coffin.

I may note here that the Roman glass (Pl. XXXIII)
was found together in one tomb at Gurob, excepting
Nos. 9, 10, 12, 13, 14, which are later. The main
group I suppose to be about the time of Constantine.
It is now in the glass department, British Museum.
The blue glass vase (13) with white thread on it is
probably about the VHIth cent. A.D. judging by the
clothing found with it.

The wood carvings at the foot of Pl. XXXII are
of about the Vllth cent. A.D. from the cemetery at
Illahun. Now at South Kensington.

PTOLEMAIS AND OTHER SITES.

54. It has long been a difficulty in the Geography
of Ptolemy, that the city of Ptolemais was placed in
the Arsinoite nome, some miles south of Arsinoe :
and yet it was called a port. The most usual settle-
ment has been by ignoring the connection with
Arsinoe and the nome, and placing it on the Nile.
It is indeed very possible that such was the original
mistake of Ptolemy himself, from supposing that a
port must be on the main river, and misunderstanding
his materials. Some years ago I pointed out, in
" Naukratis," how we must use Ptolemy by extracting
from him the original groups of materials, as far as
we can ; and that we must ignore the cross-references
from one line of measurements to another, between
which his errors accumulated. Here it is evident
that he had a fact of two cities in the Arsinoite nome,
the capital and the port of Ptolemais ; and he treats
in an entirely different part of the two other towns of
the Fayum,, Bakkhis and Dionysias, naming them
along with Lake Moiris, and apparently on the line
from Mareotis down to the oases. The position of

Arsinoe is beyond question; and therefore the fact
which Ptolemy gives is that Ptolemais was 10' south
of Arsinoe, and in the Fayum.

This would lead us to look for it along the canal
which skirts the south-east of the Fayum basin. I
have walked along all that line; it is impossible for
the canal to have followed any other course anciently :
the hills rise on the one hand, and the Fayum basin
falls on the other. To get water along to the ruined
towns and villages about Gharak this present line of
canal is the only possible course. It is even now a
large canal, which might take boats; and it must
have been much larger in Roman times, as a far
greater quantity of land was then irrigated than is
now under cultivation in this district. It is therefore
certain that a navigable canal ran along here in
Roman times, and so there is no difficulty in the
port of Ptolemais having been on this line. I searched
every mound of ruin, but found nothing of any im-
portance,—mostly being Arab sites,—until reaching
Talit, the present end of the wide canal, marked as
"Ptolemais" on PL. XXX. This position is 12' from
Arsinoe, instead of 10'; which is as near as Ptolemy's
precision allows, since he only states the nearest 5'.
And it is S.S.W. instead of S., which is tolerably
close to the position. The port or end of the navi-
gable canal cannot have been further on, as the ground
falls away, and necessitates dividing the water into
separate courses. Hence taking only Ptolemy's
geography and the configuration of the country we
should be led to this site.

55. But a totally separate means of identification
exists in the inscription (Pl. XXXII), recording a
dedication to Nero by the Ptolemaians. This slab
was found in the fort which protected the town from
the desert. The exact translation of it is not quite
settled ; and for this point the paper of Canon Hicks,
at the close of this chapter, should be considered.
This much is clear that the external argument as to
the site, is clinched by the internal proof afforded by
the inscription.

The ruins of Ptolemais adjoin the side of the canal
(Pl. XXXI) and cover a space about 1000 feet wide
from north to south, and 1300 feet long. This area
for a town would contain two to four thousand in-
habitants, according to the population of modern
Egyptian towns. But the inscription appears to
mention 6470 taxpayers, which would imply a popu-
lation of about thirty thousand. So the persons
referred to must have belonged to a much larger area
than this town. As the present population of the