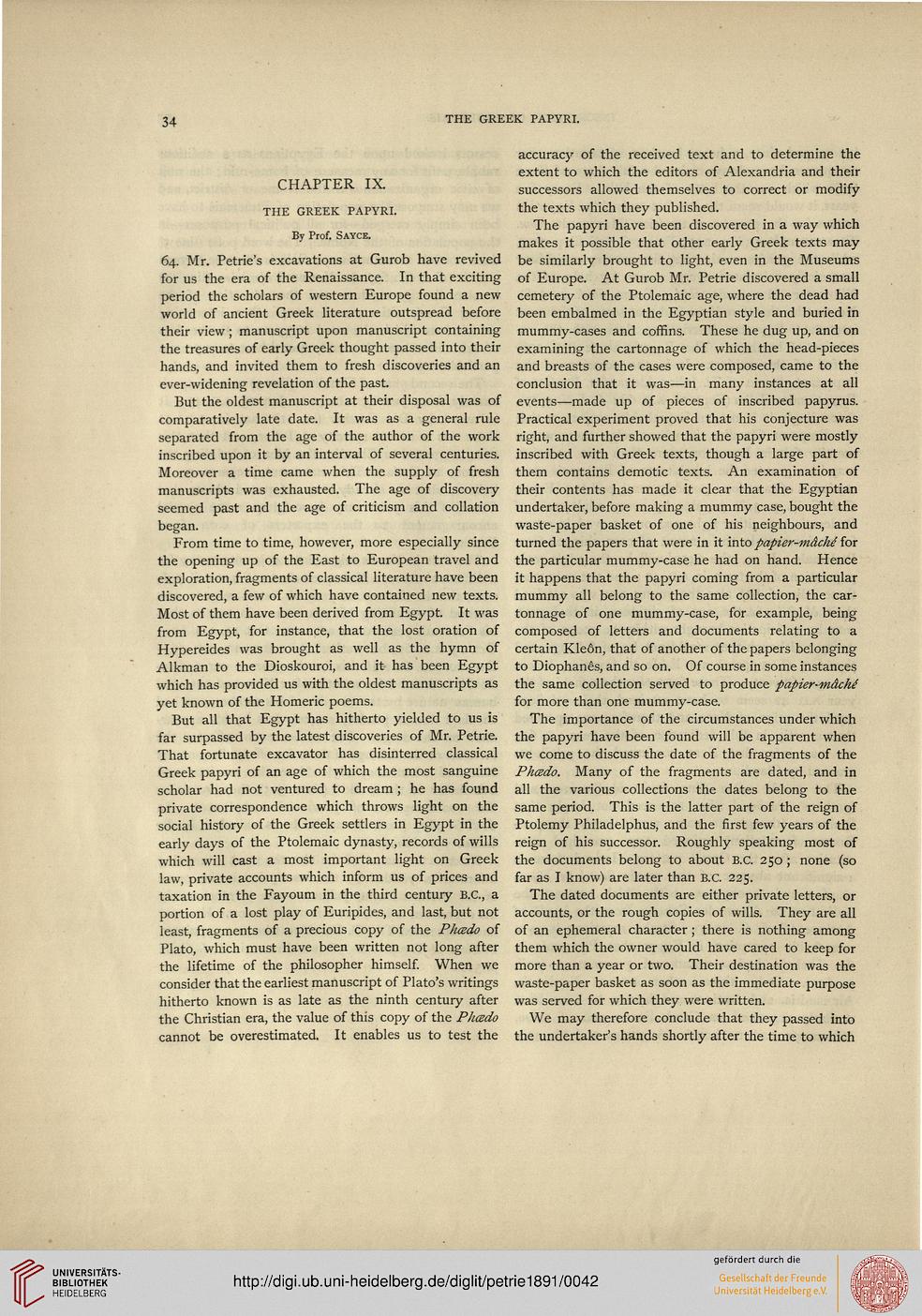 64. Mr. Petrie's excavations at Gurob have revived
for us the era of the Renaissance. In that exciting
period the scholars of western Europe found a new
world of ancient Greek literature outspread before
their view; manuscript upon manuscript containing
the treasures of early Greek thought passed into their
hands, and invited them to fresh discoveries and an
ever-widening revelation of the past.

But the oldest manuscript at their disposal was of
comparatively late date. It was as a general rule
separated from the age of the author of the work
inscribed upon it by an interval of several centuries.
Moreover a time came when the supply of fresh
manuscripts was exhausted. The age of discovery
seemed past and the age of criticism and collation
began.

From time to time, however, more especially since
the opening up of the East to European travel and
exploration, fragments of classical literature have been
discovered, a few of which have contained new texts.
Most of them have been derived from Egypt. It was
from Egypt, for instance, that the lost oration of
Hypereides was brought as well as the hymn of
Alkman to the Dioskouroi, and it has been Egypt
which has provided us with the oldest manuscripts as
yet known of the Homeric poems.

But all that Egypt has hitherto yielded to us is
far surpassed by the latest discoveries of Mr. Petrie.
That fortunate excavator has disinterred classical
Greek papyri of an age of which the most sanguine
scholar had not ventured to dream ; he has found
private correspondence which throws light on the
social history of the Greek settlers in Egypt in the
early days of the Ptolemaic dynasty, records of wills
which will cast a most important light on Greek
law, private accounts which inform us of prices and
taxation in the Fayoum in the third century B.C., a
portion of a lost play of Euripides, and last, but not
least, fragments of a precious copy of the Phado of
Plato, which must have been written not long after
the lifetime of the philosopher himself. When we
consider that the earliest manuscript of Plato's writings
hitherto known is as late as the ninth century after
the Christian era, the value of this copy of the Phcedo
cannot be overestimated. It enables us to test the

accuracy of the received text and to determine the
extent to which the editors of Alexandria and their
successors allowed themselves to correct or modify
the texts which they published.

The papyri have been discovered in a way which
makes it possible that other early Greek texts may
be similarly brought to light, even in the Museums
of Europe. At Gurob Mr. Petrie discovered a small
cemetery of the Ptolemaic age, where the dead had
been embalmed in the Egyptian style and buried in
mummy-cases and coffins. These he dug up, and on
examining the cartonnage of which the head-pieces
and breasts of the cases were composed, came to the
conclusion that it was—in many instances at all
events—made up of pieces of inscribed papyrus.
Practical experiment proved that his conjecture was
right, and further showed that the papyri were mostly
inscribed with Greek texts, though a large part of
them contains demotic texts. An examination of
their contents has made it clear that the Egyptian
undertaker, before making a mummy case, bought the
waste-paper basket of one of his neighbours, and
turned the papers that were in it into papier-m&cht for
the particular mummy-case he had on hand. Hence
it happens that the papyri coming from a particular
mummy all belong to the same collection, the car-
tonnage of one mummy-case, for example, being
composed of letters and documents relating to a
certain Kle6n, that of another of the papers belonging
to Diophan£s, and so on. Of course in some instances
the same collection served to produce papier-widckt
for more than one mummy-case.

The importance of the circumstances under which
the papyri have been found will be apparent when
we come to discuss the date of the fragments of the
Pkcedo. Many of the fragments are dated, and in
all the various collections the dates belong to the
same period. This is the latter part of the reign of
Ptolemy Philadelphus, and the first few years of the
reign of his successor. Roughly speaking most of
the documents belong to about B.C. 250; none (so
far as I know) are later than B.C. 225.

The dated documents are either private letters, or
accounts, or the rough copies of wills. They are all
of an ephemeral character; there is nothing among
them which the owner would have cared to keep for
more than a year or two. Their destination was the
waste-paper basket as soon as the immediate purpose
was served for which they were written.