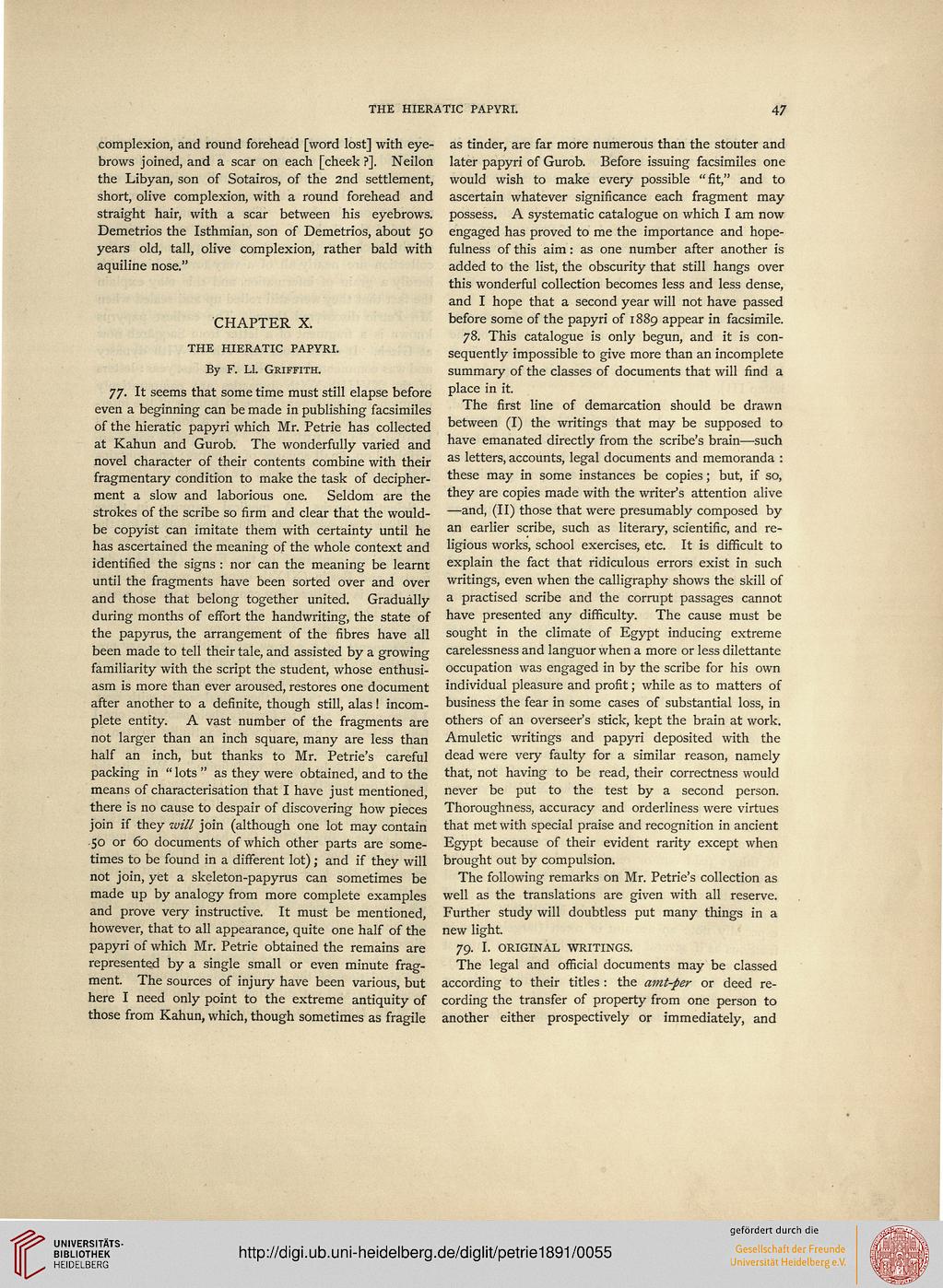 77- It seems that some time must still elapse before
even a beginning can be made in publishing facsimiles
of the hieratic papyri which Mr. Petrie has collected
at Kahun and Gurob. The wonderfully varied and
novel character of their contents combine with their
fragmentary condition to make the task of decipher-
ment a slow and laborious one. Seldom are the
strokes of the scribe so firm and clear that the would-
be copyist can imitate them with certainty until he
has ascertained the meaning of the whole context and
identified the signs : nor can the meaning be learnt
until the fragments have been sorted over and over
and those that belong together united. Gradually
during months of effort the handwriting, the state of
the papyrus, the arrangement of the fibres have all
been made to tell their tale, and assisted by a growing
familiarity with the script the student, whose enthusi-
asm is more than ever aroused, restores one document
after another to a definite, though still, alas! incom-
plete entity. A vast number of the fragments are
not larger than an inch square, many are less than
half an inch, but thanks to Mr. Petrie's careful
packing in " lots " as they were obtained, and to the
means of characterisation that I have just mentioned,
there is no cause to despair of discovering how pieces
join if they will join (although one lot may contain
.50 or 60 documents of which other parts are some-
times to be found in a different lot); and if they will
not join, yet a skeleton-papyrus can sometimes be
made up by analogy from more complete examples
and prove very instructive. It must be mentioned,
however, that to all appearance, quite one half of the
papyri of which Mr. Petrie obtained the remains are
represented by a single small or even minute frag-
ment. The sources of injury have been various, but
here I need only point to the extreme antiquity of
those from Kahun, which, though sometimes as fragile

as tinder, are far more numerous than the stouter and
later papyri of Gurob. Before issuing facsimiles one
would wish to make every possible "fit," and to
ascertain whatever significance each fragment may
possess. A systematic catalogue on which I am now
engaged has proved to me the importance and hope-
fulness of this aim: as one number after another is
added to the list, the obscurity that still hangs over
this wonderful collection becomes less and less dense,
and I hope that a second year will not have passed
before some of the papyri of 1889 appear in facsimile.
78. This catalogue is only begun, and it is con-
sequently impossible to give more than an incomplete
summary of the classes of documents that will find a
place in it.

The first line of demarcation should be drawn
between (I) the writings that may be supposed to
have emanated directly from the scribe's brain—such
as letters, accounts, legal documents and memoranda :
these may in some instances be copies; but, if so,
they are copies made with the writer's attention alive
—and, (II) those that were presumably composed by
an earlier scribe, such as literary, scientific, and re-
ligious works, school exercises, etc. It is difficult to
explain the fact that ridiculous errors exist in such
writings, even when the calligraphy shows the skill of
a practised scribe and the corrupt passages cannot
have presented any difficulty. The cause must be
sought in the climate of Egypt inducing extreme
carelessness and languor when a more or less dilettante
occupation was engaged in by the scribe for his own
individual pleasure and profit; while as to matters of
business the fear in some cases of substantial loss, in
others of an overseer's stick, kept the brain at work.
Amuletic writings and papyri deposited with the
dead were very faulty for a similar reason, namely
that, not having to be read, their correctness would
never be put to the test by a second person.
Thoroughness, accuracy and orderliness were virtues
that met with special praise and recognition in ancient
Egypt because of their evident rarity except when
brought out by compulsion.

The following remarks on Mr. Petrie's collection as
well as the translations are given with all reserve.
Further study will doubtless put many things in a
new light.

The legal and official documents may be classed
according to their titles : the amt-per or deed re-
cording the transfer of property from one person to
another either prospectively or immediately, and