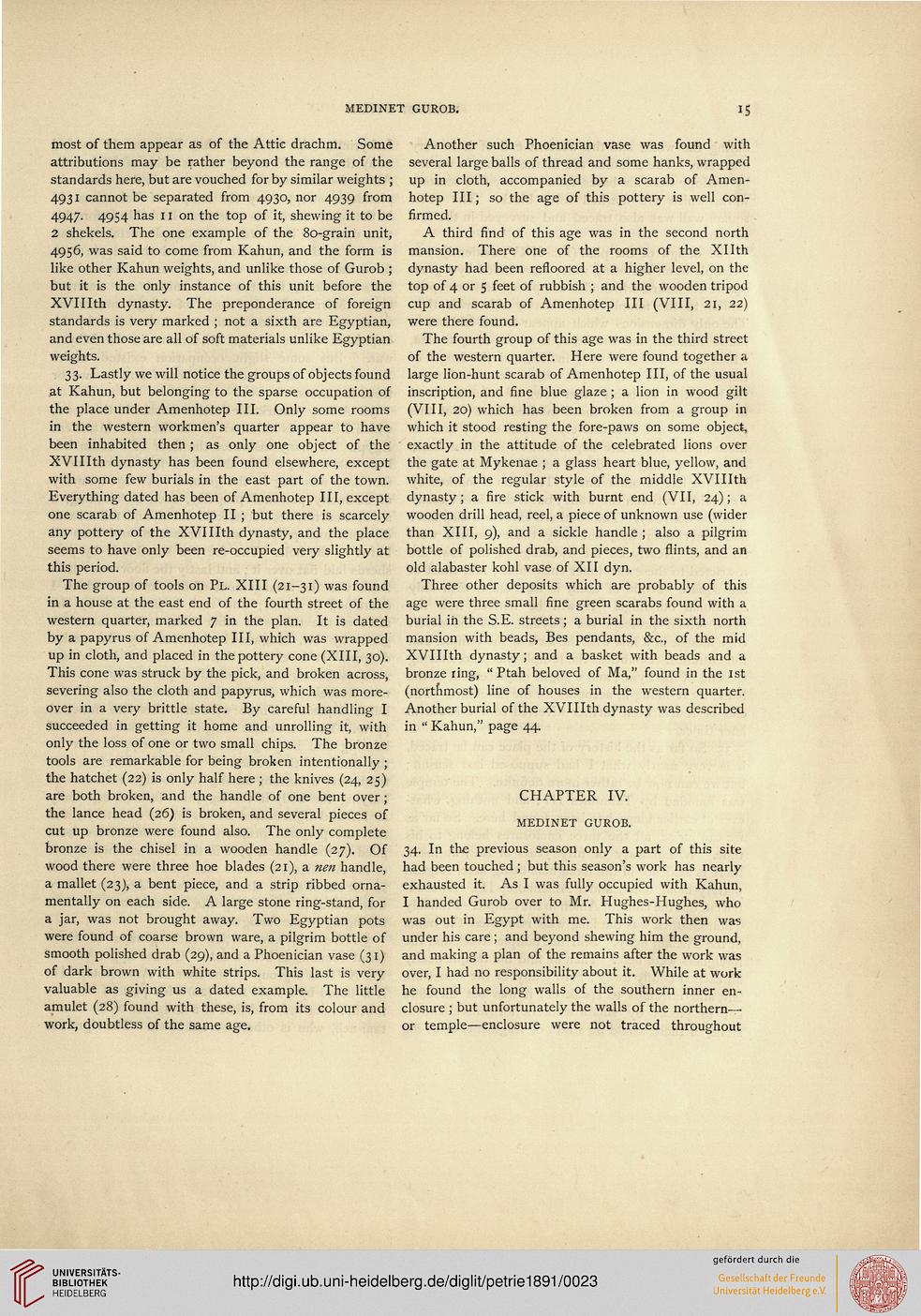 most of them appear as of the Attic drachm. Some
attributions may be rather beyond the range of the
standards here, but are vouched for by similar weights ;
4931 cannot be separated from 4930, nor 4939 from
4947. 4954 has 11 on the top of it, shewing it to be
2 shekels. The one example of the 80-grain unit,
4956, was said to come from Kahun, and the form is
like other Kahun weights, and unlike those of Gurob ;
but it is the only instance of this unit before the
XVIIIth dynasty. The preponderance of foreign
standards is very marked ; not a sixth are Egyptian,
and even those are all of soft materials unlike Egyptian
weights.

33. Lastly we will notice the groups of objects found
at Kahun, but belonging to the sparse occupation of
the place under Amenhotep III. Only some rooms
in the western workmen's quarter appear to have
been inhabited then; as only one object of the
XVII Ith dynasty has been found elsewhere, except
with some few burials in the east part of the town.
Everything dated has been of Amenhotep III, except
one scarab of Amenhotep II ; but there is scarcely
any potteiy of the XVIIIth dynasty, and the place
seems to have only been re-occupied very slightly at
this period.

The group of tools on Pl. XIII (21-31) was found
in a house at the east end of the fourth street of the
western quarter, marked 7 in the plan. It is dated
by a papyrus of Amenhotep III, which was wrapped
up in cloth, and placed in the pottery cone (XIII, 30).
This cone was struck by the pick, and broken across,
severing also the cloth and papyrus, which was more-
over in a very brittle state. By careful handling I
succeeded in getting it home and unrolling it, with
only the loss of one or two small chips. The bronze
tools are remarkable for being broken intentionally ;
the hatchet (22) is only half here ; the knives (24, 25)
are both broken, and the handle of one bent over;
the lance head (26) is broken, and several pieces of
cut up bronze were found also. The only complete
bronze is the chisel in a wooden handle (27). Of
wood there were three hoe blades (21), a nen handle,
a mallet (23), a bent piece, and a strip ribbed orna-
mentally on each side. A large stone ring-stand, for
a jar, was not brought away. Two Egyptian pots
were found of coarse brown ware, a pilgrim bottle of
smooth polished drab (29), and a Phoenician vase (31)
of dark brown with white strips. This last is very
valuable as giving us a dated example. The little
amulet (28) found with these, is, from its colour and
work, doubtless of the same age.

Another such Phoenician vase was found with
several large balls of thread and some hanks, wrapped
up in cloth, accompanied by a scarab of Amen-
hotep III; so the age of this pottery is well con-
firmed.

A third find of this age was in the second north
mansion. There one of the rooms of the Xllth
dynasty had been refloored at a higher level, on the
top of 4 or 5 feet of rubbish ; and the wooden tripod
cup and scarab of Amenhotep III (VIII, 21, 22)
were there found.

The fourth group of this age was in the third street
of the western quarter. Here were found together a
large lion-hunt scarab of Amenhotep III, of the usual
inscription, and fine blue glaze ; a lion in wood gilt
(VIII, 20) which has been broken from a group in
which it stood resting the fore-paws on some object,
exactly in the attitude of the celebrated lions over
the gate at Mykenae ; a glass heart blue, yellow, and
white, of the regular style of the middle XVIIIth
dynasty; a fire stick with burnt end (VII, 24); a
wooden drill head, reel, a piece of unknown use (wider
than XIII, 9), and a sickle handle ; also a pilgrim
bottle of polished drab, and pieces, two flints, and an
old alabaster kohl vase of XII dyn.

Three other deposits which are probably of this
age were three small fine green scarabs found with a
burial in the S.E. streets; a burial in the sixth north
mansion with beads, Bes pendants, &c, of the mid
XVIIIth dynasty; and a basket with beads and a
bronze ring, " Ptah beloved of Ma," found in the 1st
(nortnmost) line of houses in the western quarter.
Another burial of the XVIIIth dynasty was described
in " Kahun," page 44.

34. In the previous season only a part of this site
had been touched ; but this season's work has nearly
exhausted it. As I was fully occupied with Kahun,
I handed Gurob over to Mr. Hughes-Hughes, who
was out in Egypt with me. This work then was
under his care; and beyond shewing him the ground,
and making a plan of the remains after the work was
over, I had no responsibility about it. While at work
he found the long walls of the southern inner en-
closure ; but unfortunately the walls of the northern—
or temple—enclosure were not traced throughout