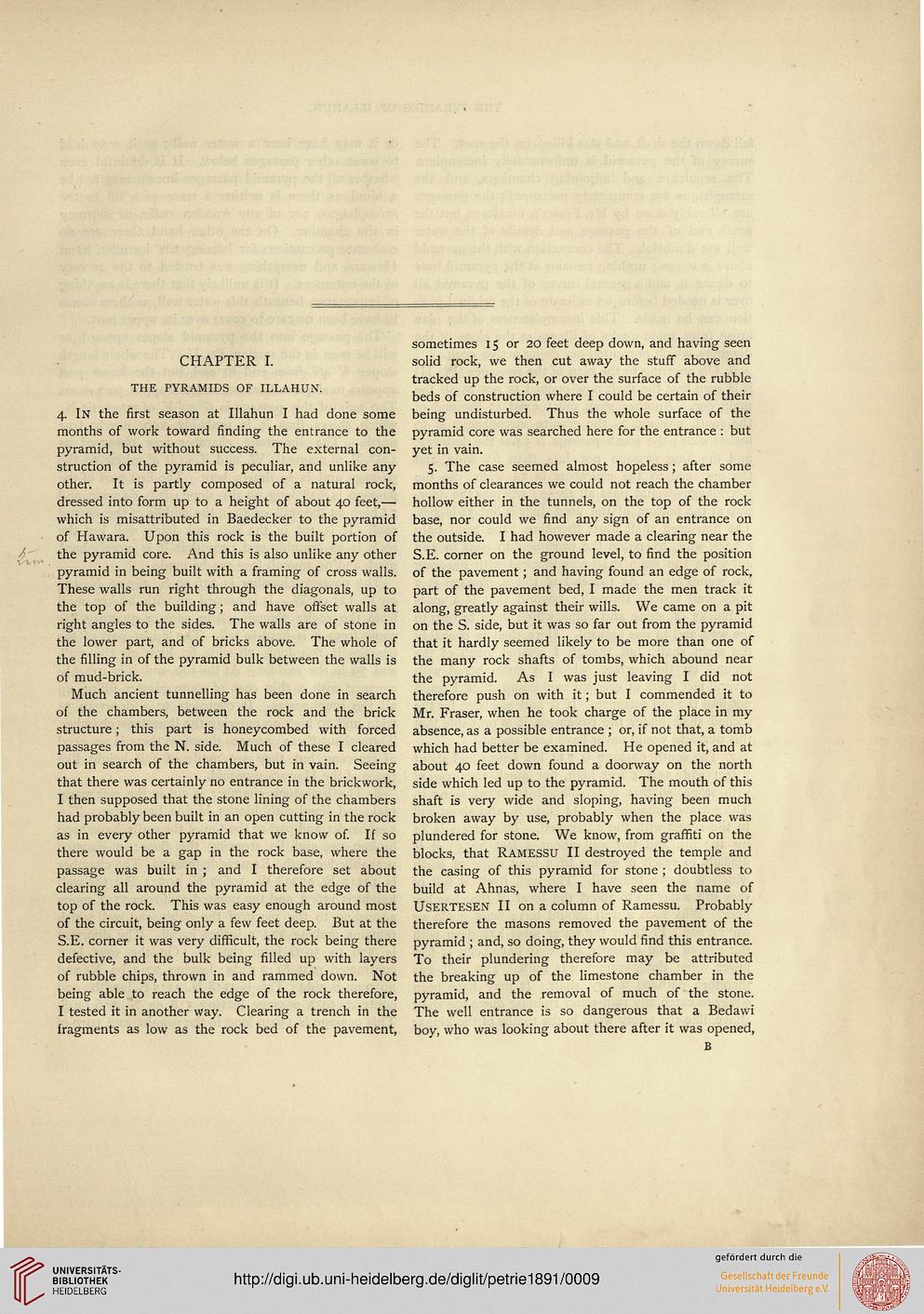 4. In the first season at Illahun I had done some
months of work toward finding the entrance to the
pyramid, but without success. The external con-
struction of the pyramid is peculiar, and unlike any
other. It is partly composed of a natural rock,
dressed into form up to a height of about 40 feet,—
which is misattributed in Baedecker to the pyramid
of Hawara. Upon this rock is the built portion of
the pyramid core. And this is also unlike any other
pyramid in being built with a framing of cross walls.
These walls run right through the diagonals, up to
the top of the building; and have offset walls at
right angles to the sides. The walls are of stone in
the lower part, and of bricks above. The whole of
the filling in of the pyramid bulk between the walls is
of mud-brick.

Much ancient tunnelling has been done in search
of the chambers, between the rock and the brick
structure; this part is honeycombed with forced
passages from the N. side. Much of these I cleared
out in search of the chambers, but in vain. Seeing
that there was certainly no entrance in the brickwork,
I then supposed that the stone lining of the chambers
had probably been built in an open cutting in the rock
as in every other pyramid that we know of. If so
there would be a gap in the rock base, where the
passage was built in ; and I therefore set about
clearing all around the pyramid at the edge of the
top of the rock. This was easy enough around most
of the circuit, being only a few feet deep. But at the
S.E. corner it was very difficult, the rock being there
defective, and the bulk being filled up with layers
of rubble chips, thrown in and rammed down. Not
being able to reach the edge of the rock therefore,
I tested it in another way. Clearing a trench in the
fragments as low as the rock bed of the pavement,

sometimes 15 or 20 feet deep down, and having seen
solid rock, we then cut away the stuff above and
tracked up the rock, or over the surface of the rubble
beds of construction where I could be certain of their
being undisturbed. Thus the whole surface of the
pyramid core was searched here for the entrance : but
yet in vain.

5. The case seemed almost hopeless; after some
months of clearances we could not reach the chamber
hollow either in the tunnels, on the top of the rock
base, nor could we find any sign of an entrance on
the outside. I had however made a clearing near the
S.E. corner on the ground level, to find the position
of the pavement; and having found an edge of rock,
part of the pavement bed, I made the men track it
along, greatly against their wills. We came on a pit
on the S. side, but it was so far out from the pyramid
that it hardly seemed likely to be more than one of
the many rock shafts of tombs, which abound near
the pyramid. As I was just leaving I did not
therefore push on with it; but I commended it to
Mr. Fraser, when he took charge of the place in my
absence, as a possible entrance ; or, if not that, a tomb
which had better be examined. He opened it, and at
about 40 feet down found a doorway on the north
side which led up to the pyramid. The mouth of this
shaft is very wide and sloping, having been much
broken away by use, probably when the place was
plundered for stone. We know, from graffiti on the
blocks, that RAMESSU II destroyed the temple and
the casing of this pyramid for stone ; doubtless to
build at Ahnas, where I have seen the name of
USERTESEN II on a column of Ramessu. Probably
therefore the masons removed the pavement of the
pyramid ; and, so doing, they would find this entrance.
To their plundering therefore may be attributed
the breaking up of the limestone chamber in the
pyramid, and the removal of much of the stone.
The well entrance is so dangerous that a Bedawi
boy, who was looking about there after it was opened,