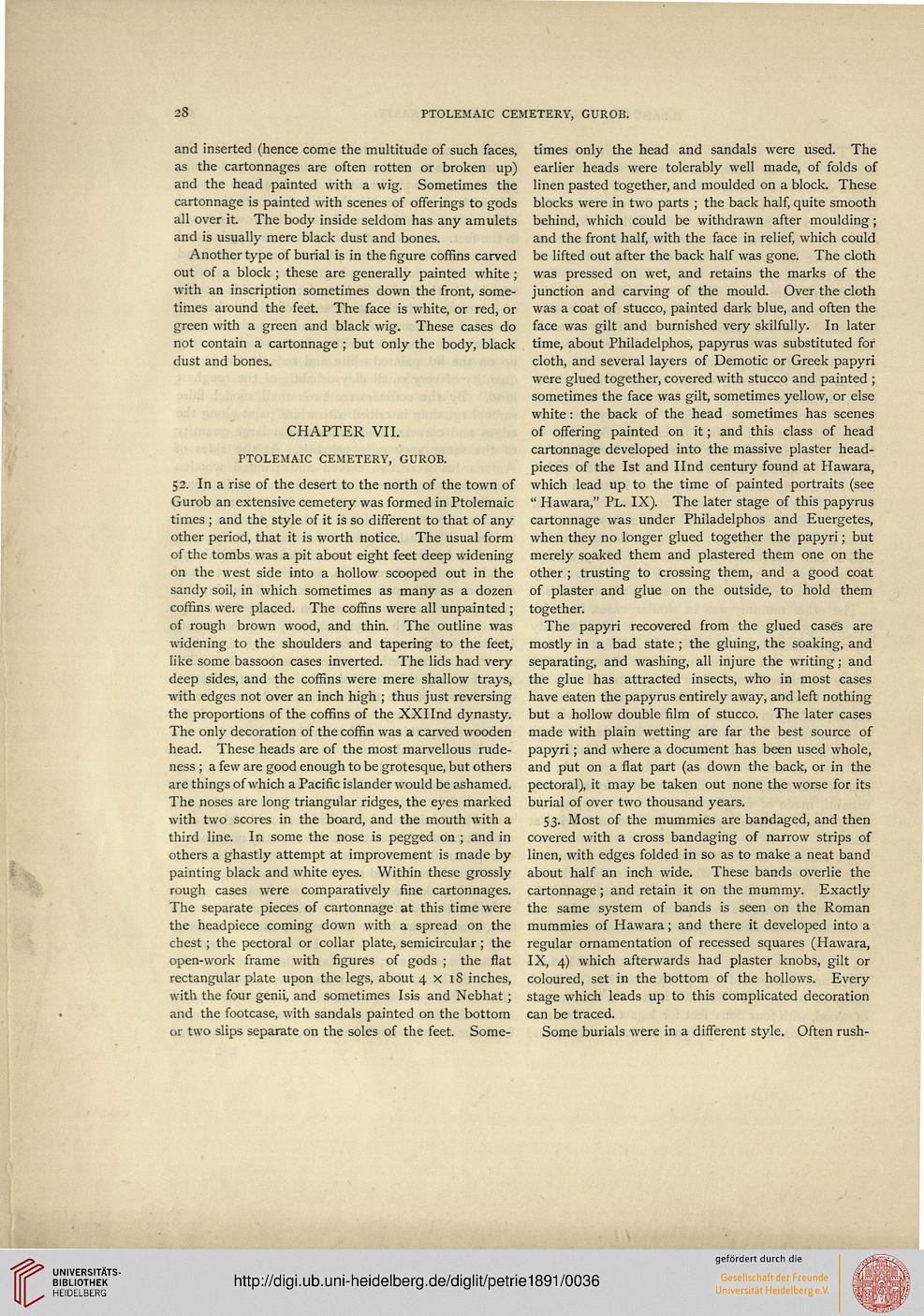 and inserted (hence come the multitude of such faces,
as the cartonnages are often rotten or broken up)
and the head painted with a wig. Sometimes the
cartonnage is painted with scenes of offerings to gods
all over it. The body inside seldom has any amulets
and is usually mere black dust and bones.

Another type of burial is in the figure coffins carved
out of a block ; these are generally painted white ;
with an inscription sometimes down the front, some-
times around the feet. The face is white, or red, or
green with a green and black wig. These cases do
not contain a cartonnage ; but only the body, black
dust and bones.

52. In a rise of the desert to the north of the town of
Gurob an extensive cemetery was formed in Ptolemaic
times ; and the style of it is so different to that of any
other period, that it is worth notice. The usual form
of the tombs was a pit about eight feet deep widening
on the west side into a hollow scooped out in the
sandy soil, in which sometimes as many as a dozen
coffins were placed. The coffins were all unpainted ;
of rough brown wood, and thin. The outline was
widening to the shoulders and tapering to the feet,
like some bassoon cases inverted. The lids had very
deep sides, and the coffins were mere shallow trays,
with edges not over an inch high ; thus just reversing
the proportions of the coffins of the XXIInd dynasty.
The only decoration of the coffin was a carved wooden
head. These heads are of the most marvellous rude-
ness ; a few are good enough to be grotesque, but others
are things of which a Pacific islander would be ashamed.
The noses are long triangular ridges, the eyes marked
with two scores in the board, and the mouth with a
third line. In some the nose is pegged on ; and in
others a ghastly attempt at improvement is made by
painting black and white eyes. Within these grossly
rough cases were comparatively fine cartonnages.
The separate pieces of cartonnage at this time were
the headpiece coming down with a spread on the
chest; the pectoral or collar plate, semicircular; the
open-work frame with figures of gods ; the flat
rectangular plate upon the legs, about 4 x iS inches,
with the four genii, and sometimes Isis and Nebhat;
and the footcase, with sandals painted on the bottom
or two slips separate on the soles of the feet. Some-

times only the head and sandals were used. The
earlier heads were tolerably well made, of folds of
linen pasted together, and moulded on a block. These
blocks were in two parts ; the back half, quite smooth
behind, which could be withdrawn after moulding;
and the front half, with the face in relief, which could
be lifted out after the back half was gone. The cloth
was pressed on wet, and retains the marks of the
junction and carving of the mould. Over the cloth
was a coat of stucco, painted dark blue, and often the
face was gilt and burnished very skilfully. In later
time, about Philadelphos, papyrus was substituted for
cloth, and several layers of Demotic or Greek papyri
were glued together, covered with stucco and painted ;
sometimes the face was gilt, sometimes yellow, or else
white: the back of the head sometimes has scenes
of offering painted on it; and this class of head
cartonnage developed into the massive plaster head-
pieces of the 1st and Ilnd century found at Hawara,
which lead up to the time of painted portraits (see
" Hawara," PL. IX). The later stage of this papyrus
cartonnage was under Philadelphos and Euergetes,
when they no longer glued together the papyri; but
merely soaked them and plastered them one on the
other ; trusting to crossing them, and a good coat
of plaster and glue on the outside, to hold them
together.

The papyri recovered from the glued case's are
mostly in a bad state ; the gluing, the soaking, and
separating, and washing, all injure the writing; and
the glue has attracted insects, who in most cases
have eaten the papyrus entirely away, and left nothing
but a hollow double film of stucco. The later cases
made with plain wetting are far the best source of
papyri; and where a document has been used whole,
and put on a flat part (as down the back, or in the
pectoral), it may be taken out none the worse for its
burial of over two thousand years.

53. Most of the mummies are bandaged, and then
covered with a cross bandaging of narrow strips of
linen, with edges folded in so as to make a neat band
about half an inch wide. These bands overlie the
cartonnage; and retain it on the mummy. Exactly
the same system of bands is seen on the Roman
mummies of Hawara; and there it developed into a
regular ornamentation of recessed squares (Hawara,
IX, 4) which afterwards had plaster knobs, gilt or
coloured, set in the bottom of the hollows. Every
stage which leads up to this complicated decoration
can be traced.

Some burials were in a different style. Often rush-