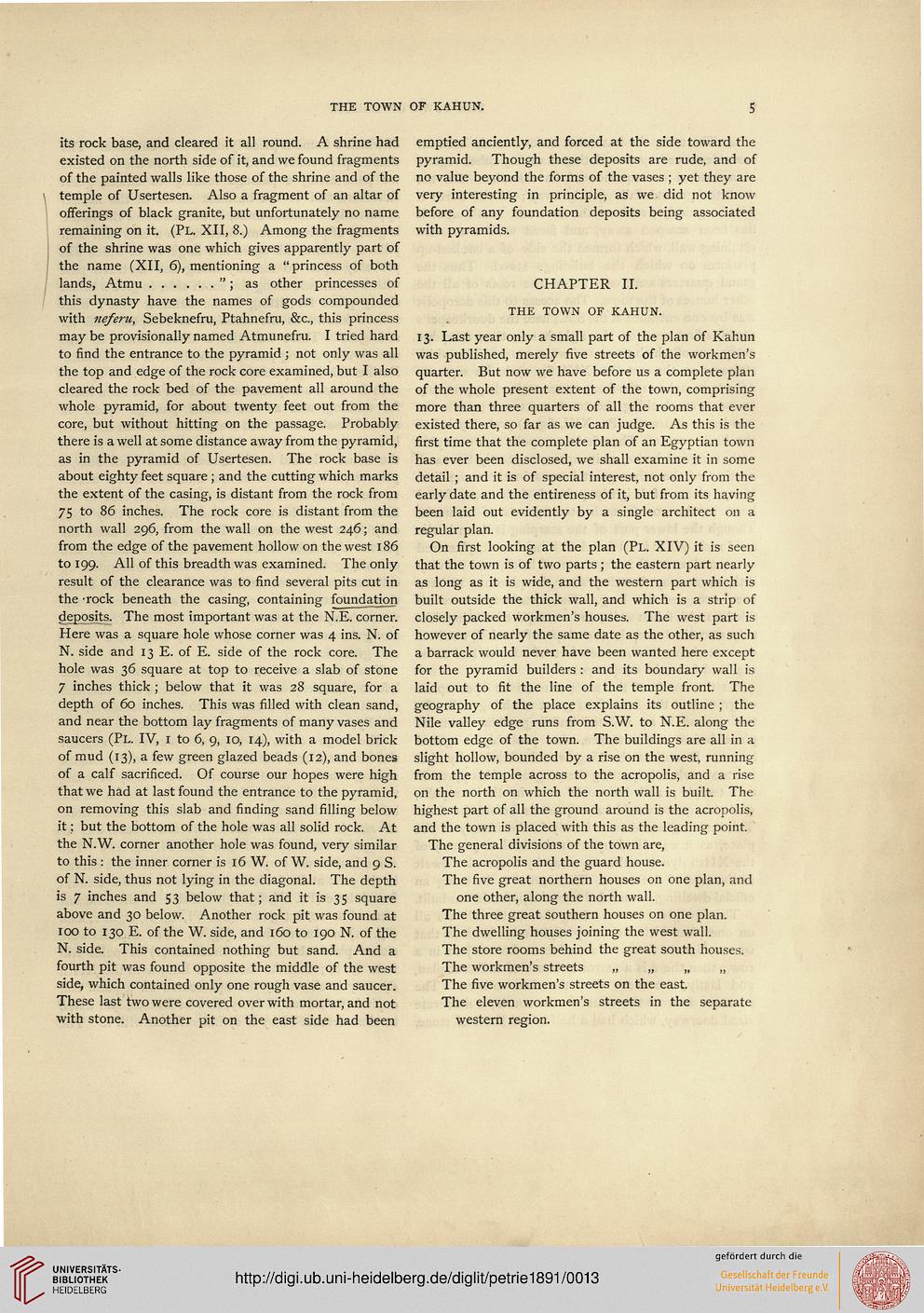 its rock base, and cleared it all round. A shrine had
existed on the north side of it, and we found fragments
of the painted walls like those of the shrine and of the
temple of Usertesen. Also a fragment of an altar of
offerings of black granite, but unfortunately no name
remaining on it. (PL. XII, 8.) Among the fragments
of the shrine was one which gives apparently part of
the name (XII, 6), mentioning a " princess of both

this dynasty have the names of gods compounded
with neferu, Sebeknefru, Ptahnefru, &c, this princess
may be provisionally named Atmunefru. I tried hard
to find the entrance to the pyramid ; not only was all
the top and edge of the rock core examined, but I also
cleared the rock bed of the pavement all around the
whole pyramid, for about twenty feet out from the
core, but without hitting on the passage. Probably
there is a well at some distance away from the pyramid,
as in the pyramid of Usertesen. The rock base is
about eighty feet square ; and the cutting which marks
the extent of the casing, is distant from the rock from
75 to 86 inches. The rock core is distant from the
north wall 296, from the wall on the west 246; and
from the edge of the pavement hollow on the west 186
to 199. All of this breadth was examined. The only
result of the clearance was to find several pits cut in
the -rock beneath the casing, containing foundation
deposits. The most important was at the N.E. corner.
Here was a square hole whose corner was 4 ins. N. of
N. side and 13 E. of E. side of the rock core. The
hole was 36 square at top to receive a slab of stone
7 inches thick ; below that it was 28 square, for a
depth of 60 inches. This was filled with clean sand,
and near the bottom lay fragments of many vases and
saucers (PL. IV, 1 to 6, 9, 10, 14), with a model brick
of mud (13), a few green glazed beads (12), and bones
of a calf sacrificed. Of course our hopes were high
that we had at last found the entrance to the pyramid,
on removing this slab and finding sand filling below
it: but the bottom of the hole was all solid rock. At
the N.W. corner another hole was found, very similar
to this : the inner corner is 16 W. of W. side, and 9 S.
of N. side, thus not lying in the diagonal. The depth
is 7 inches and S3 below that; and it is 35 square
above and 30 below. Another rock pit was found at
100 to 130 E. of the W. side, and 160 to 190 N. of the
N. side. This contained nothing but sand. And a
fourth pit was found opposite the middle of the west
side, which contained only one rough vase and saucer.
These last two were covered over with mortar, and not
with stone. Another pit on the east side had been

emptied anciently, and forced at the side toward the
pyramid. Though these deposits are rude, and of
no value beyond the forms of the vases ; yet they are
very interesting in principle, as we did not know
before of any foundation deposits being associated
with pyramids.

THE TOWN OF KAHUN.

13. Last year only a small part of the plan of Kahun
was published, merely five streets of the workmen's
quarter. But now we have before us a complete plan
of the whole present extent of the town, comprising
more than three quarters of all the rooms that ever
existed there, so far as we can judge. As this is the
first time that the complete plan of an Egyptian town
has ever been disclosed, we shall examine it in some
detail ; and it is of special interest, not only from the
early date and the entireness of it, but from its having
been laid out evidently by a single architect on a
regular plan.

On first looking at the plan (Pl. XIV) it is seen
that the town is of two parts ; the eastern part nearly
as long as it is wide, and the western part which is
built outside the thick wall, and which is a strip of
closely packed workmen's houses. The west part is
however of nearly the same date as the other, as such
a barrack would never have been wanted here except
for the pyramid builders : and its boundary wall is
laid out to fit the line of the temple front. The
geography of the place explains its outline ; the
Nile valley edge runs from S.W. to N.E. along the
bottom edge of the town. The buildings are all in a
slight hollow, bounded by a rise on the west, running
from the temple across to the acropolis, and a rise
on the north on which the north wall is built. The
highest part of all the ground around is the acropolis,
and the town is placed with this as the leading point.
The general divisions of the town are,

The acropolis and the guard house.

The five great northern houses on one plan, and
one other, along the north wall.

The three great southern houses on one plan.

The store rooms behind the great south houses.

The five workmen's streets on the east.

The eleven workmen's streets in the separate
western region.