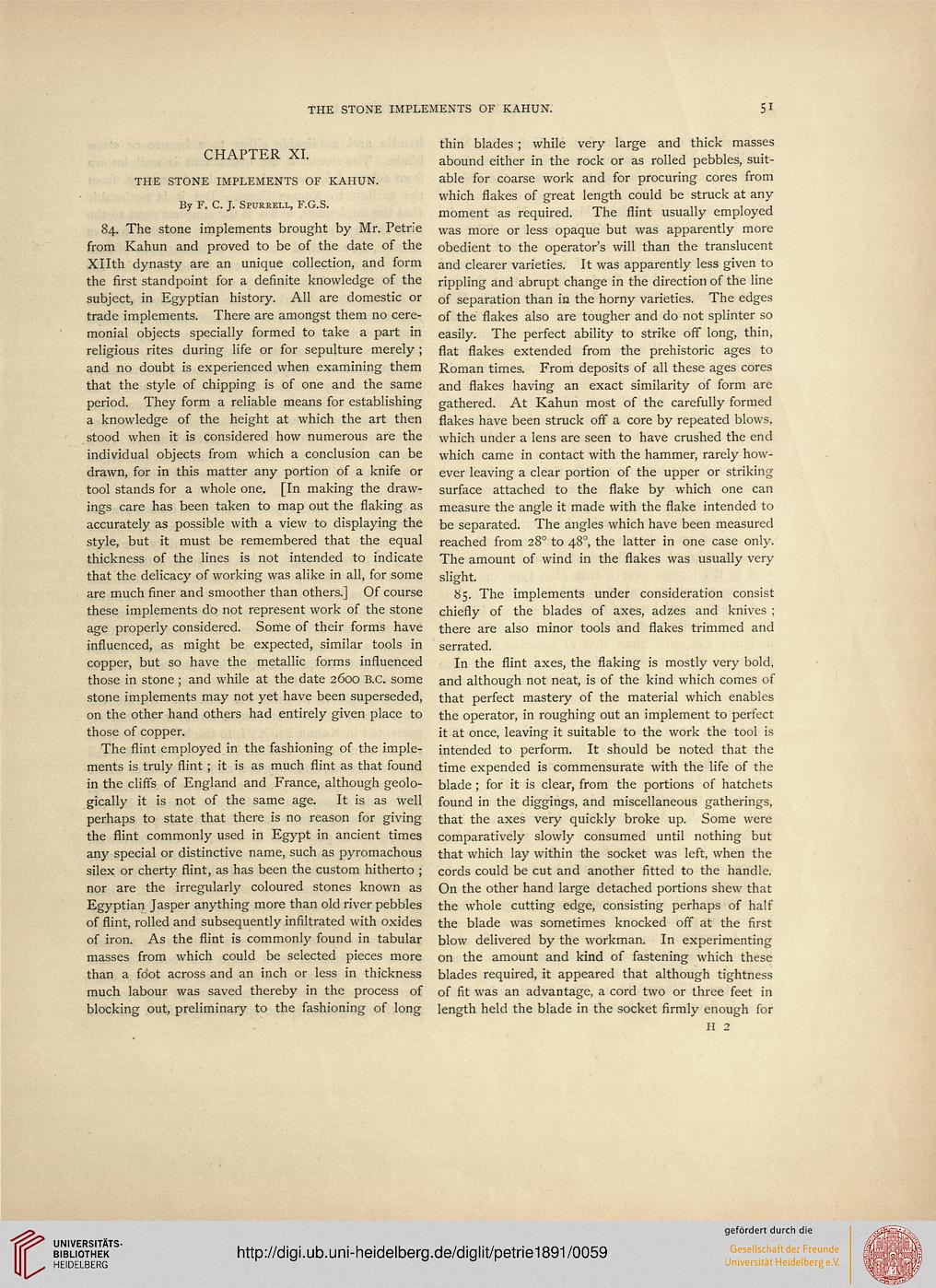 84. The stone implements brought by Mr. Petrie
from Kahun and proved to be of the date of the
Xllth dynasty are an unique collection, and form
the first standpoint for a definite knowledge of the
subject, in Egyptian history. All are domestic or
trade implements. There are amongst them no cere-
monial objects specially formed to take a part in
religious rites during life or for sepulture merely ;
and no doubt is experienced when examining them
that the style of chipping is of one and the same
period. They form a reliable means for establishing
a knowledge of the height at which the art then
stood when it is considered how numerous are the
individual objects from which a conclusion can be
drawn, for in this matter any portion of a knife or
tool stands for a whole one. [In making the draw-
ings care has been taken to map out the flaking as
accurately as possible with a view to displaying the
style, but it must be remembered that the equal
thickness of the lines is not intended to indicate
that the delicacy of working was alike in all, for some
are much finer and smoother than others.] Of course
these implements do not represent work of the stone
age properly considered. Some of their forms have
influenced, as might be expected, similar tools in
copper, but so have the metallic forms influenced
those in stone ; and while at the date 2600 B.C. some
stone implements may not yet have been superseded,
on the other hand others had entirely given place to
those of copper.

The flint employed in the fashioning of the imple-
ments is truly flint; it is as much flint as that found
in the cliffs of England and France, although geolo-
gically it is not of the same age. It is as well
perhaps to state that there is no reason for giving
the flint commonly used in Egypt in ancient times
any special or distinctive name, such as pyromachous
silex or cherty flint, as has been the custom hitherto ;
nor are the irregularly coloured stones known as
Egyptian Jasper anything more than old river pebbles
of flint, rolled and subsequently infiltrated with oxides
of iron. As the flint is commonly found in tabular
masses from which could be selected pieces more
than a foot across and an inch or less in thickness
much labour was saved thereby in the process of
blocking out, preliminary to the fashioning of long

thin blades; while very large and thick masses
abound either in the rock or as rolled pebbles, suit-
able for coarse work and for procuring cores from
which flakes of great length could be struck at any
moment as required. The flint usually employed
was more or less opaque but was apparently more
obedient to the operator's will than the translucent
and clearer varieties. It was apparently less given to
rippling and abrupt change in the direction of the line
of separation than in the horny varieties. The edges
of the flakes also are tougher and do not splinter so
easily. The perfect ability to strike off long, thin,
flat flakes extended from the prehistoric ages to
Roman times. From deposits of all these ages cores
and flakes having an exact similarity of form are
gathered. At Kahun most of the carefully formed
flakes have been struck off a core by repeated blows,
which under a lens are seen to have crushed the end
which came in contact with the hammer, rarely how-
ever leaving a clear portion of the upper or striking
surface attached to the flake by which one can
measure the angle it made with the flake intended to
be separated. The angles which have been measured
reached from 280 to 480, the latter in one case only.
The amount of wind in the flakes was usually very
slight.

85. The implements under consideration consist
chiefly of the blades of axes, adzes and knives ;
there are also minor tools and flakes trimmed and
serrated.

In the flint axes, the flaking is mostly very bold,
and although not neat, is of the kind which comes of
that perfect mastery of the material which enables
the operator, in roughing out an implement to perfect
it at once, leaving it suitable to the work the tool is
intended to perform. It should be noted that the
time expended is commensurate with the life of the
blade ; for it is clear, from the portions of hatchets
found in the diggings, and miscellaneous gatherings,
that the axes very quickly broke up. Some were
comparatively slowly consumed until nothing but
that which lay within the socket was left, when the
cords could be cut and another fitted to the handle.
On the other hand large detached portions shew that
the whole cutting edge, consisting perhaps of half
the blade was sometimes knocked off at the first
blow delivered by the workman. In experimenting
on the amount and kind of fastening which these
blades required, it appeared that although tightness
of fit was an advantage, a cord two or three feet in
length held the blade in the socket firmly enough for