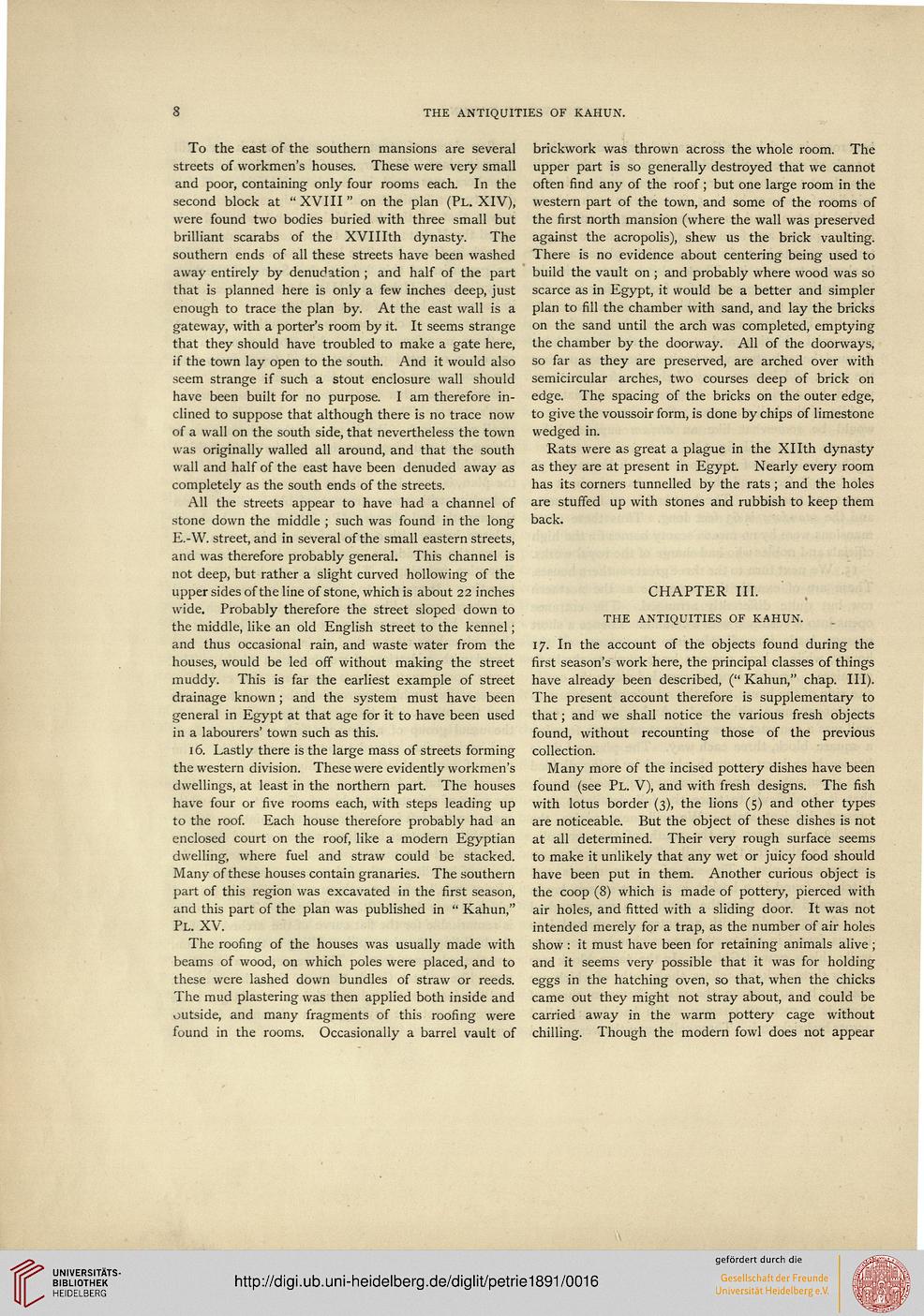 THE ANTIQUITIES OF KAHUN.

To the east of the southern mansions are several
streets of workmen's houses. These were very small
and poor, containing only four rooms each. In the
second block at " XVIII " on the plan (Pl. XIV),
were found two bodies buried with three small but
brilliant scarabs of the XVIIIth dynasty. The
southern ends of all these streets have been washed
away entirely by denudation ; and half of the part
that is planned here is only a few inches deep, just
enough to trace the plan by. At the east wall is a
gateway, with a porter's room by it. It seems strange
that they should have troubled to make a gate here,
if the town lay open to the south. And it would also
seem strange if such a stout enclosure wall should
have been built for no purpose. I am therefore in-
clined to suppose that although there is no trace now
of a wall on the south side, that nevertheless the town
was originally walled all around, and that the south
wall and half of the east have been denuded away as
completely as the south ends of the streets.

All the streets appear to have had a channel of
stone down the middle ; such was found in the long
E.-W. street, and in several of the small eastern streets,
and was therefore probably general. This channel is
not deep, but rather a slight curved hollowing of the
upper sides of the line of stone, which is about 22 inches
wide. Probably therefore the street sloped down to
the middle, like an old English street to the kennel;
and thus occasional rain, and waste water from the
houses, would be led off without making the street
muddy. This is far the earliest example of street
drainage known; and the system must have been
general in Egypt at that age for it to have been used
in a labourers' town such as this.

16. Lastly there is the large mass of streets forming
the western division. These were evidently workmen's
dwellings, at least in the northern part. The houses
have four or five rooms each, with steps leading up
to the roof. Each house therefore probably had an
enclosed court on the roof, like a modern Egyptian
dwelling, where fuel and straw could be stacked.
Many of these houses contain granaries. The southern
part of this region was excavated in the first season,
and this part of the plan was published in " Kahun,"
PL. XV.

The roofing of the houses was usually made with
beams of wood, on which poles were placed, and to
these were lashed down bundles of straw or reeds.
The mud plastering was then applied both inside and
outside, and many fragments of this roofing were
found in the rooms. Occasionally a barrel vault of

brickwork was thrown across the whole room. The
upper part is so generally destroyed that we cannot
often find any of the roof; but one large room in the
western part of the town, and some of the rooms of
the first north mansion (where the wall was preserved
against the acropolis), shew us the brick vaulting.
There is no evidence about centering being used to
build the vault on ; and probably where wood was so
scarce as in Egypt, it would be a better and simpler
plan to fill the chamber with sand, and lay the bricks
on the sand until the arch was completed, emptying
the chamber by the doorway. All of the doorways,
so far as they are preserved, are arched over with
semicircular arches, two courses deep of brick on
edge. The spacing of the bricks on the outer edge,
to give the voussoir form, is done by chips of limestone
wedged in.

Rats were as great a plague in the Xllth dynasty
as they are at present in Egypt. Nearly every room
has its corners tunnelled by the rats; and the holes
are stuffed up with stones and rubbish to keep them
back.

THE ANTIQUITIES OF KAHUN.

17. In the account of the objects found during the
first season's work here, the principal classes of things
have already been described, (" Kahun," chap. III).
The present account therefore is supplementary to
that; and we shall notice the various fresh objects
found, without recounting those of the previous
collection.

Many more of the incised pottery dishes have been
found (see Pl. V), and with fresh designs. The fish
with lotus border (3), the lions (5) and other types
are noticeable. But the object of these dishes is not
at all determined. Their very rough surface seems
to make it unlikely that any wet or juicy food should
have been put in them. Another curious object is
the coop (8) which is made of pottery, pierced with
air holes, and fitted with a sliding door. It was not
intended merely for a trap, as the number of air holes
show : it must have been for retaining animals alive ;
and it seems very possible that it was for holding
eggs in the hatching oven, so that, when the chicks
came out they might not stray about, and could be
carried away in the warm pottery cage without
chilling. Though the modern fowl does not appear