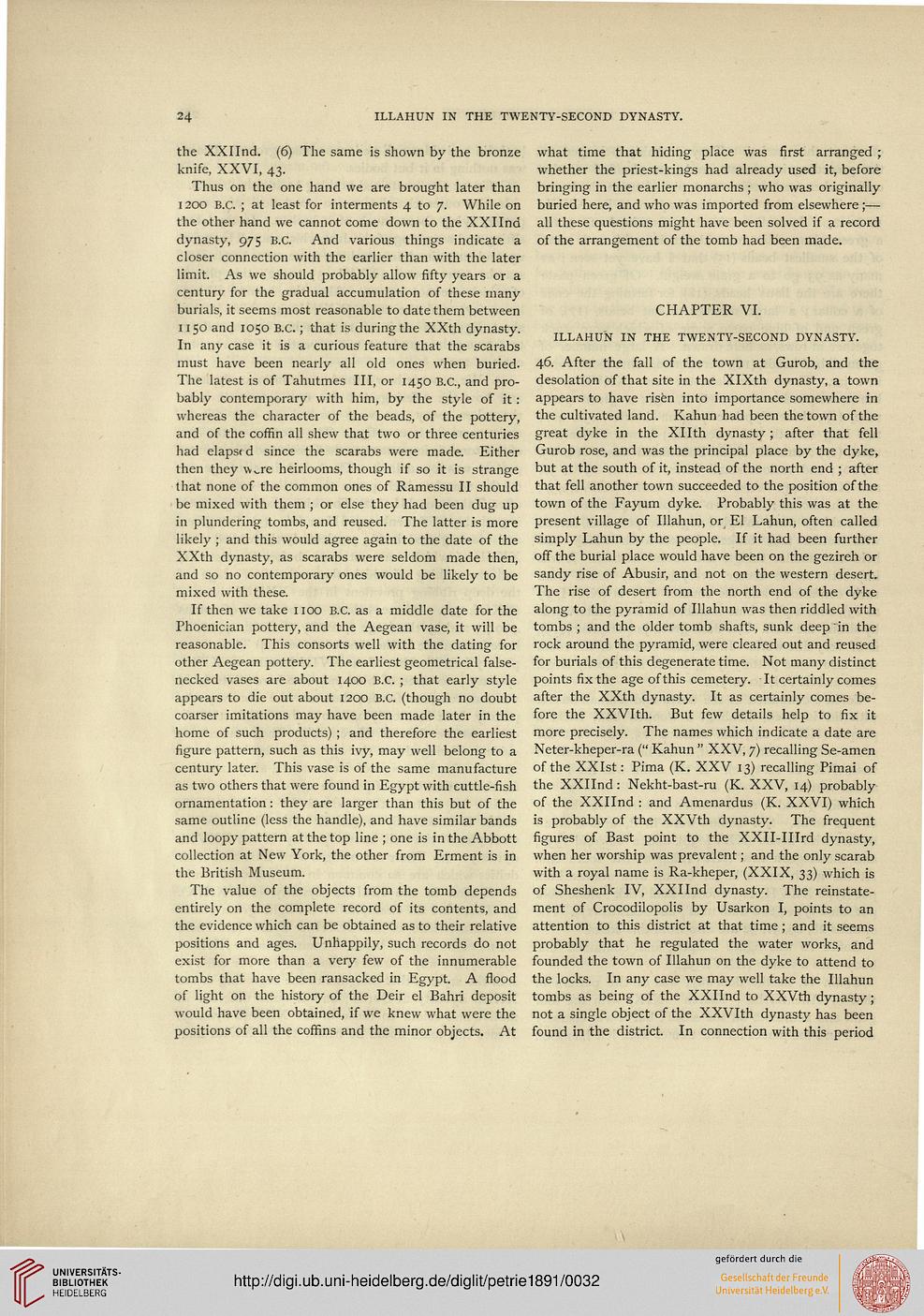 ILLAHUN IN THE TWENTY-SECOND DYNASTY.

Thus on the one hand we are brought later than
1200 B.C. ; at least for interments 4 to 7. While on
the other hand we cannot come down to the XXIInd
dynasty, 975 B.C. And various things indicate a
closer connection with the earlier than with the later
limit. As we should probably allow fifty years or a
century for the gradual accumulation of these many
burials, it seems most reasonable to date them between
1150 and 1050 B.C.; that is during the XXth dynasty.
In any case it is a curious feature that the scarabs
must have been nearly all old ones when buried.
The latest is of Tahutmes III, or 1450 B.C., and pro-
bably contemporary with him, by the style of it:
whereas the character of the beads, of the pottery,
and of the coffin all shew that two or three centuries
had elapstd since the scarabs were made. Either
then they w^re heirlooms, though if so it is strange
that none of the common ones of Ramessu II should
be mixed with them ; or else they had been dug up
in plundering tombs, and reused. The latter is more
likely ; and this would agree again to the date of the
XXth dynasty, as scarabs were seldom made then,
and so no contemporary ones would be likely to be
mixed with these.

If then we take 1100 B.C. as a middle date for the
Phoenician pottery, and the Aegean vase, it will be
reasonable. This consorts well with the dating for
other Aegean pottery. The earliest geometrical false-
necked vases are about 1400 B.C. ; that early style
appears to die out about 1200 B.C. (though no doubt
coarser imitations may have been made later in the
home of such products) ; and therefore the earliest
figure pattern, such as this ivy, may well belong to a
century later. This vase is of the same manufacture
as two others that were found in Egypt with cuttle-fish
ornamentation: they are larger than this but of the
same outline (less the handle), and have similar bands
and loopy pattern at the top line ; one is in the Abbott
collection at New York, the other from Erment is in
the British Museum.

The value of the objects from the tomb depends
entirely on the complete record of its contents, and
the evidence which can be obtained as to their relative
positions and ages. Unhappily, such records do not
exist for more than a very few of the innumerable
tombs that have been ransacked in Egypt. A flood
of light on the history of the Deir el Bahri deposit
would have been obtained, if we knew what were the
positions of all the coffins and the minor objects. At

what time that hiding place was first arranged ;
whether the priest-kings had already used it, before
bringing in the earlier monarchs ; who was originally
buried here, and who was imported from elsewhere;—
all these questions might have been solved if a record
of the arrangement of the tomb had been made.

ILLAHUN IN THE TWENTY-SECOND DYNASTY.

46. After the fall of the town at Gurob, and the
desolation of that site in the XlXth dynasty, a town
appears to have risen into importance somewhere in
the cultivated land. Kahun had been the town of the
great dyke in the Xllth dynasty; after that fell
Gurob rose, and was the principal place by the dyke,
but at the south of it, instead of the north end ; after
that fell another town succeeded to the position of the
town of the Fayum dyke. Probably this was at the
present village of Ulahun, or^ El Lahun, often called
simply Lahun by the people. If it had been further
off the burial place would have been on the gezireh or
sandy rise of Abusir, and not on the western desert.
The rise of desert from the north end of the dyke
along to the pyramid of Illahun was then riddled with
tombs ; and the older tomb shafts, sunk deep in the
rock around the pyramid, were cleared out and reused
for burials of this degenerate time. Not many distinct
points fix the age of this cemetery. It certainly comes
after the XXth dynasty. It as certainly comes be-
fore the XXVIth. But few details help to fix it
more precisely. The names which indicate a date are
Neter-kheper-ra (" Kahun " XXV, 7) recalling Se-amen
of the XXIst: Pima (K. XXV 13) recalling Pimai of
the XXIInd: Nekht-bast-ru (K. XXV, 14) probably
of the XXIInd : and Amenardus (K. XXVI) which
is probably of the XXVth dynasty. The frequent
figures of Bast point to the XXII-IIIrd dynasty,
when her worship was prevalent; and the only scarab
with a royal name is Ra-kheper, (XXIX, 33) which is
of Sheshenk IV, XXIInd dynasty. The reinstate-
ment of Crocodilopolis by Usarkon I, points to an
attention to this district at that time; and it seems
probably that he regulated the water works, and
founded the town of Illahun on the dyke to attend to
the locks. In any case we may well take the Illahun
tombs as being of the XXIInd to XXVth dynasty;
not a single object of the XXVIth dynasty has been
found in the district. In connection with this period