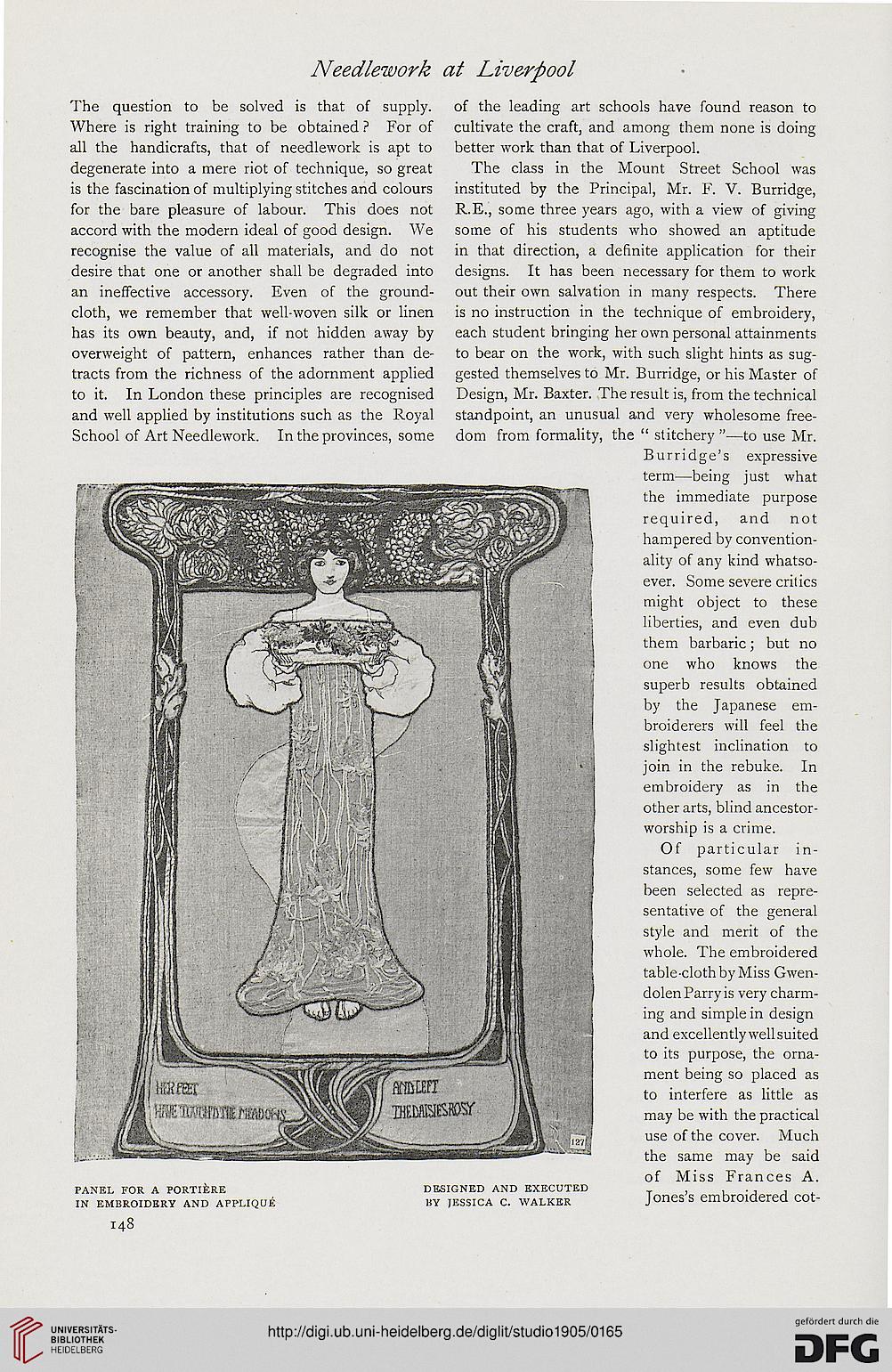 The question to be solved is that of supply. of the leading art schools have found reason to
Where is right training to be obtained ? For of cultivate the craft, and among them none is doing
all the handicrafts, that of needlework is apt to better work than that of Liverpool,
degenerate into a mere riot of technique, so great The class in the Mount Street School was
is the fascination of multiplying stitches and colours instituted by the Principal, Mr. F. V. Burridge,
for the bare pleasure of labour. This does not R.E., some three years ago, with a view of giving
accord with the modern ideal of good design. We some of his students who showed an aptitude
recognise the value of all materials, and do not in that direction, a definite application for their
desire that one or another shall be degraded into designs. It has been necessary for them to work
an ineffective accessory. Even of the ground- out their own salvation in many respects. There
cloth, we remember that well-woven silk or linen is no instruction in the technique of embroidery,
has its own beauty, and, if not hidden away by each student bringing her own personal attainments
overweight of pattern, enhances rather than de- to bear on the work, with such slight hints as sug-
tracts from the richness of the adornment applied gested themselves to Mr. Burridge, or his Master of
to it. In London these principles are recognised Design, Mr. Baxter. The result is, from the technical
and well applied by institutions such as the Royal standpoint, an unusual and very wholesome free-
School of Art Needlework. In the provinces, some dom from formality, the " stitchery "—to use Mr.

Burridge's expressive
term—being just what
the immediate purpose
required, and not
hampered by convention-
ality of any kind whatso-
ever. Some severe critics
might object to these
liberties, and even dub
them barbaric; but no
one who knows the
superb results obtained
by the Japanese em-
broiderers will feel the
slightest inclination to
join in the rebuke. In
embroidery as in the
other arts, blind ancestor-
worship is a crime.

Of particular in-
stances, some few have
been selected as repre-
sentative of the general
style and merit of the
whole. The embroidered
table cloth by Miss Gwen-
dolen Parry is very charm-
ing and simple in design
and excellently well suited
to its purpose, the orna-
ment being so placed as
to interfere as little as
may be with the practical
use of the cover. Much
the same may be said
of Miss Frances A.

panel for a portiere designed and executed , .