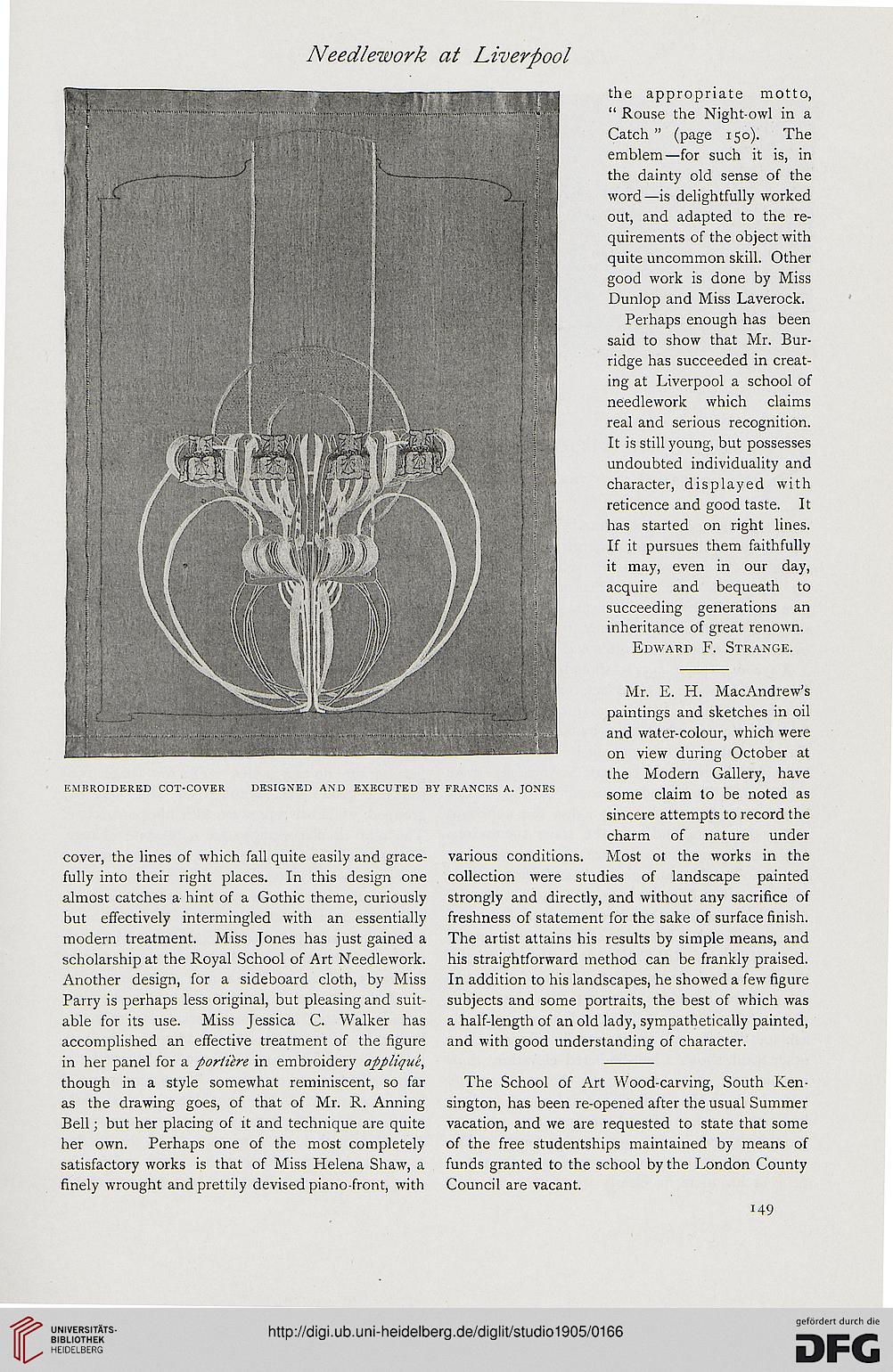 the appropriate motto,
" Rouse the Night-owl in a
Catch " (page 150). The
emblem—for such it is, in
the dainty old sense of the
word—is delightfully worked
out, and adapted to the re-
quirements of the object with
quite uncommon skill. Other
good work is done by Miss
Dunlop and Miss Laverock.

Perhaps enough has been
said to show that Mr. Bur-
ridge has succeeded in creat-
ing at Liverpool a school of
needlework which claims
real and serious recognition.
It is still young, but possesses
undoubted individuality and
character, displayed with
reticence and good taste. It
has started on right lines.
If it pursues them faithfully
it may, even in our day,
acquire and bequeath to
succeeding generations an
inheritance of great renown.
Edward F. Strange.

Mr. E. H. MacAndrew's
paintings and sketches in oil
and water-colour, which were
on view during October at
the Modern Gallery, have

embroidered cot-cover designed and executed by frances a. jones SOme claim tO be noted as

sincere attempts to record the
charm of nature under

cover, the lines of which fall quite easily and grace- various conditions. Most ot the works in the

fully into their right places. In this design one collection were studies of landscape painted

almost catches a hint of a Gothic theme, curiously strongly and directly, and without any sacrifice of

but effectively intermingled with an essentially freshness of statement for the sake of surface finish,

modern treatment. Miss Jones has just gained a The artist attains his results by simple means, and

scholarship at the Royal School of Art Needlework. his straightforward method can be frankly praised.

Another design, for a sideboard cloth, by Miss In addition to his landscapes, he showed a few figure

Parry is perhaps less original, but pleasing and suit- subjects and some portraits, the best of which was

able for its use. Miss Jessica C. Walker has a half-length of an old lady, sympathetically painted,

accomplished an effective treatment of the figure and with good understanding of character,

in her panel for a portiere in embroidery applique, -

though in a style somewhat reminiscent, so far The School of Art Wood-carving, South Ken-
as the drawing goes, of that of Mr. R. Anning sington, has been re-opened after the usual Summer
Bell; but her placing of it and technique are quite vacation, and we are requested to state that some
her own. Perhaps one of the most completely of the free studentships maintained by means of
satisfactory works is that of Miss Helena Shaw, a funds granted to the school by the London County
finely wrought and prettily devised piano-front, with Council are vacant.