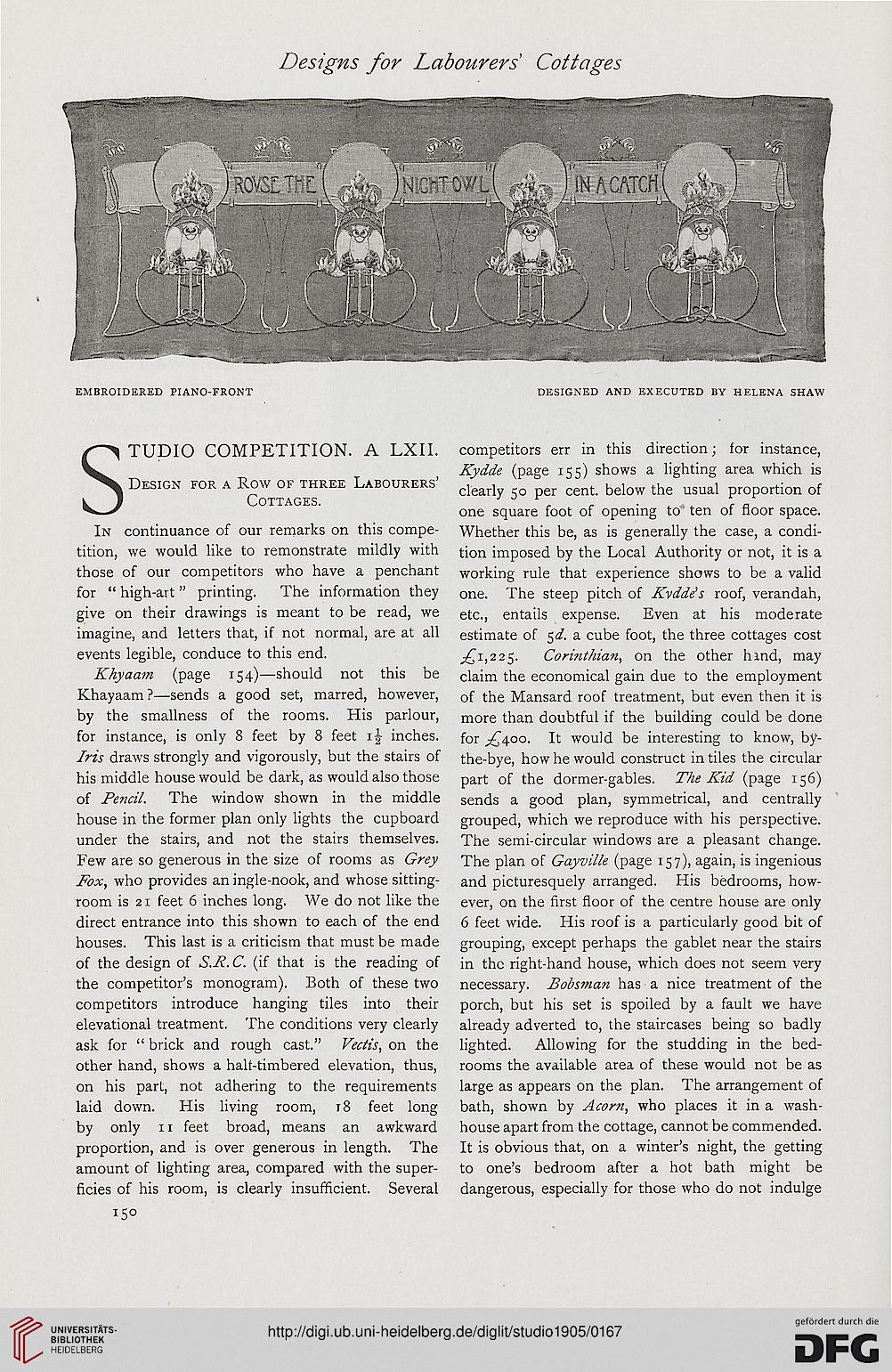 STUDIO COMPETITION. A LXII. competitors err in this direction; for instance,
Kydde (page 155) shows a lighting area which is

Cottages. , , ■ r a
one square foot of opening to ten of floor space.

In continuance of our remarks on this compe- Whether this be, as is generally the case, a condi-

tition, we would like to remonstrate mildly with tion imposed by the Local Authority or not, it is a

for " high-art" printing. The information they one. The steep pitch of Kvdde's roof, verandah,

give on their drawings is meant to be read, we etc., entails expense. Even at his moderate

imagine, and letters that, if not normal, are at all estimate of $d. a cube foot, the three cottages cost

events legible, conduce to this end. ,£1,225. Corinthian, on the other hind, may

Khyaam (page 154)—should not this be claim the economical gain due to the employment
Khayaam ?—sends a good set, marred, however, Df the Mansard roof treatment, but even then it is
by the smallness of the rooms. His parlour, m0re than doubtful if the building could be done
for instance, is only 8 feet by 8 feet \\ inches. for ^400. It would be interesting to know, by-
Iris draws strongly and vigorously, but the stairs of the-bye, how he would construct in tiles the circular
his middle house would be dark, as would also those part of the dormer-gables. The Kid (page 156)
of Pencil. The window shown in the middle sends a good plan, symmetrical, and centrally
house in the former plan only lights the cupboard grouped, which we reproduce with his perspective,
under the stairs, and not the stairs themselves. The semi-circular windows are a pleasant change.
Few are so generous in the size of rooms as Grey The plan of Gayville (page 157), again, is ingenious
Fox, who provides an ingle-nook, and whose sitting- and picturesquely arranged. His bedrooms, how-
room is 21 feet 6 inches long. We do not like the ever, on the first floor of the centre house are only
direct entrance into this shown to each of the end 6 feet wide. His roof is a particularly good bit of
houses. This last is a criticism that must be made grouping, except perhaps the gablet near the stairs
of the design of S.R. C. (if that is the reading of in the right-hand house, which does not seem very
the competitor's monogram). Both of these two necessary. Bobsman has a nice treatment of the
competitors introduce hanging tiles into their porch, but his set is spoiled by a fault we have
elevational treatment. The conditions very clearly already adverted to, the staircases being so badly
ask for " brick and rough cast." Vectis, on the lighted. Allowing for the studding in the bed-
other hand, shows a halt-timbered elevation, thus, rooms the available area of these would not be as
on his part, not adhering to the requirements large as appears on the plan. The arrangement of
laid down. His living room, r8 feet long bath, shown by Acorn, who places it in a wash-
by only 11 feet broad, means an awkward house apart from the cottage, cannot be commended,
proportion, and is over generous in length. The It is obvious that, on a winter's night, the getting
amount of lighting area, compared with the super- to one's bedroom after a hot bath might be
ficies of his room, is clearly insufficient. Several dangerous, especially for those who do not indulge