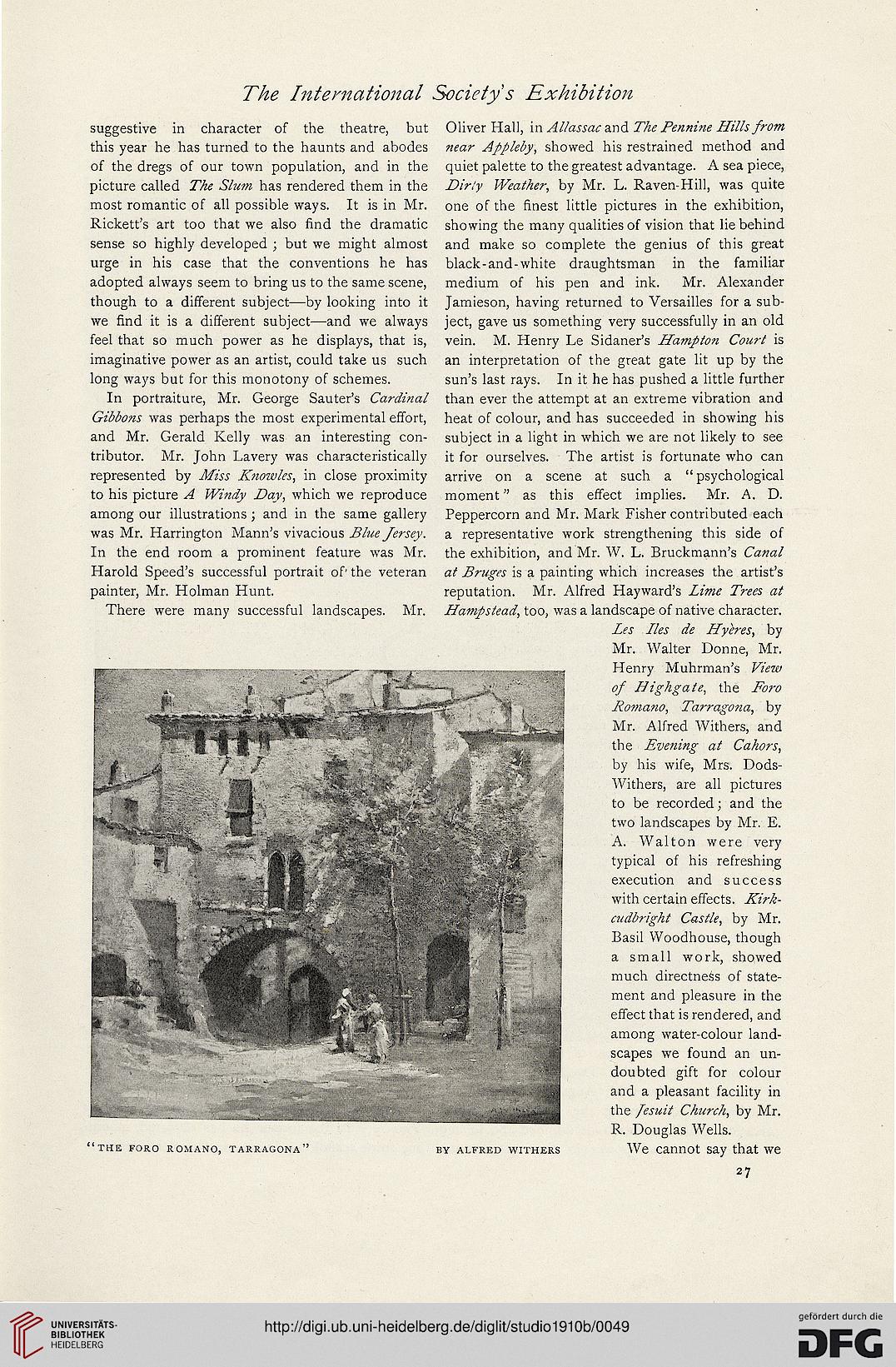 suggestive in character of the theatre, but
this year he has turned to the haunts and abodes
of the dregs of our town population, and in the
picture called The Slum has rendered them in the
most romantic of all possible ways. It is in Mr.
Rickett’s art too that we also find the dramatic
sense so highly developed ; but we might almost
urge in his case that the conventions he has
adopted always seem to bring us to the same scene,
though to a different subject—by looking into it
we find it is a different subject—and we always
feel that so much power as he displays, that is,
imaginative power as an artist, could take us such
long ways but for this monotony of schemes.

In portraiture, Mr. George Sauter’s Cardinal
Gibbons was perhaps the most experimental effort,
and Mr. Gerald Kelly was an interesting con-
tributor. Mr. John La very was characteristically
represented by Miss Knowles, in close proximity
to his picture A Windy Day, which we reproduce
among our illustrations ; and in the same gallery
was Mr. Harrington Mann’s vivacious Blue Jersey.
In the end room a prominent feature was Mr.
Harold Speed’s successful portrait of' the veteran
painter, Mr. Holman Hunt.

There were many successful landscapes. Mr.

Oliver Hall, in Al/assac and The Pennine Hills from
near Appleby, showed his restrained method and
quiet palette to the greatest advantage. A sea piece,
Dirty Weather, by Mr. L. Raven-Hill, was quite
one of the finest little pictures in the exhibition,
showing the many qualities of vision that lie behind
and make so complete the genius of this great
black-and-white draughtsman in the familiar
medium of his pen and ink. Mr. Alexander
Jamieson, having returned to Versailles for a sub-
ject, gave us something very successfully in an old
vein. M. Henry Le Sidaner’s Hampton Court is
an interpretation of the great gate lit up by the
sun’s last rays. In it he has pushed a little further
than ever the attempt at an extreme vibration and
heat of colour, and has succeeded in showing his
subject in a light in which we are not likely to see
it for ourselves. The artist is fortunate who can
arrive on a scene at such a “ psychological
moment ” as this effect implies. Mr. A. D.
Peppercorn and Mr. Mark Fisher contributed each
a representative work strengthening this side of
the exhibition, and Mr. W. L. Bruckmann’s Canal
at Bruges is a painting which increases the artist’s
reputation. Mr. Alfred Hayward’s Lime T?-ees at
Hampstead, too, was a landscape of native character.

Les lies de Hyeres, by
Mr. Walter Donne, Mr.
Henry Muhrman’s View
of Highgate, the Foro
Roma?io, Tarragona, by
Mr. Alfred Withers, and
the Evening at Cahors,
by his wife, Mrs. Dods-
Withers, are all pictures
to be recorded; and the
two landscapes by Mr. E.
A. Walton were very
typical of his refreshing
execution and success
with certain effects. Kirk-
cudbright Castle, by Mr.
Basil Woodhouse, though
a small work, showed
much directness of state-
ment and pleasure in the
effect that is rendered, and
among water-colour land-
scapes we found an un-
doubted gift for colour
and a pleasant facility in
the Pesuit Church, by Mr.
R. Douglas Wells.

We cannot say that we