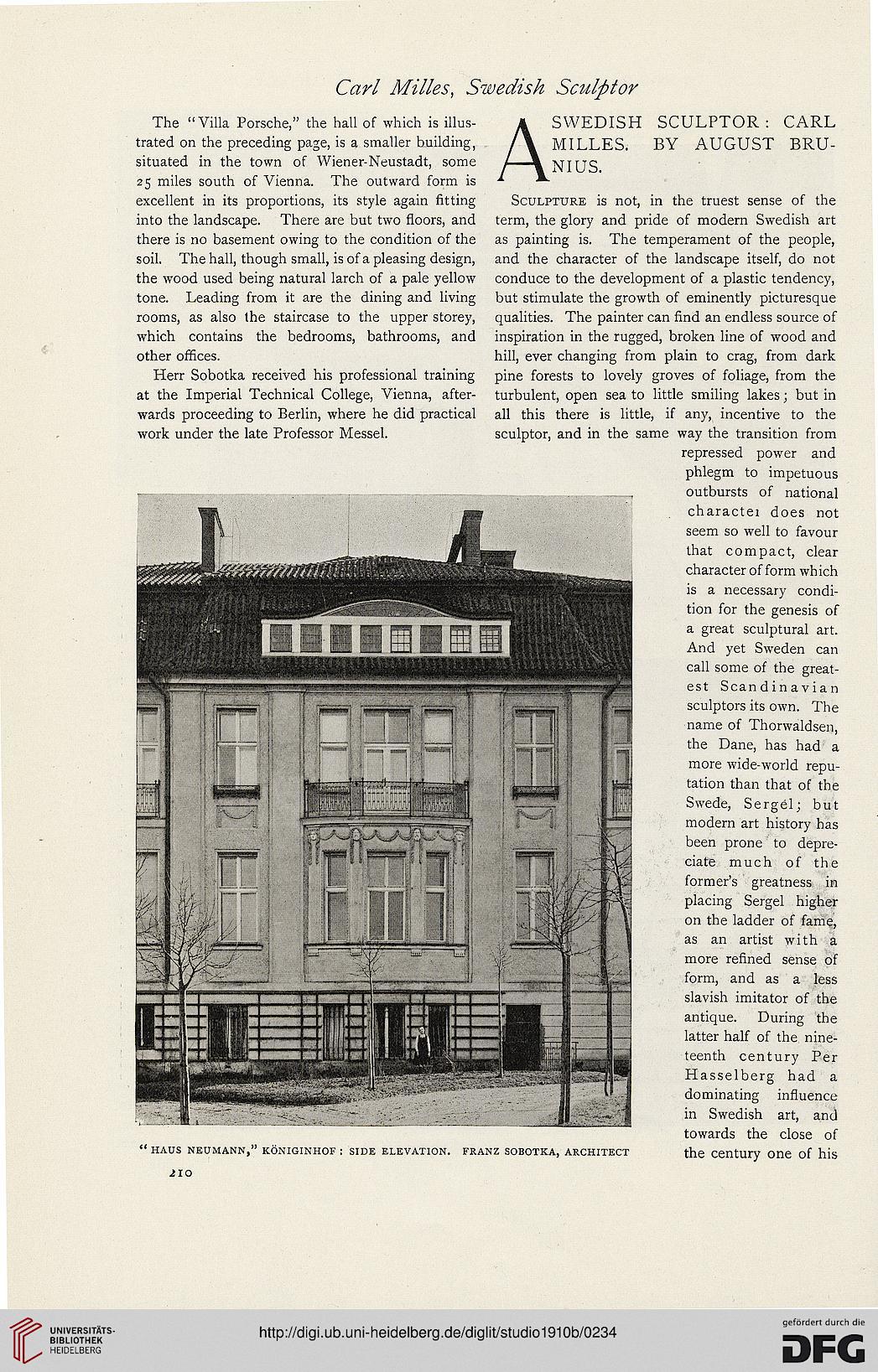 The “Villa Porsche,” the hall of which is illus-
trated on the preceding page, is a smaller building,
situated in the town of Wiener-Neustadt, some
25 miles south of Vienna. The outward form is
excellent in its proportions, its style again fitting
into the landscape. There are but two floors, and
there is no basement owing to the condition of the
soil. The hall, though small, is of a pleasing design,
the wood used being natural larch of a pale yellow
tone. Leading from it are the dining and living
rooms, as also the staircase to the upper storey,
which contains the bedrooms, bathrooms, and
other offices.

Herr Sobotka received his professional training
at the Imperial Technical College, Vienna, after-
wards proceeding to Berlin, where he did practical
work under the late Professor Messel.

Sculpture is not, in the truest sense of the
term, the glory and pride of modern Swedish art
as painting is. The temperament of the people,
and the character of the landscape itself, do not
conduce to the development of a plastic tendency,
but stimulate the growth of eminently picturesque
qualities. The painter can find an endless source of
inspiration in the rugged, broken line of wood and
hill, ever changing from plain to crag, from dark
pine forests to lovely groves of foliage, from the
turbulent, open sea to little smiling lakes; but in
all this there is little, if any, incentive to the
sculptor, and in the same way the transition from

repressed power and
phlegm to impetuous
outbursts of national
character does not
seem so well to favour
that compact, clear
character of form which
is a necessary condi-
tion for the genesis of
a great sculptural art.
And yet Sweden can
call some of the great-
est Scandinavian
sculptors its own. The
name of Thorwaldsen,
the Dane, has had a
more wide-world repu-
tation than that of the
Swede, Sergei; but
modern art history has
been prone to depre-
ciate much of the
former’s greatness in
placing Sergei higher
on the ladder of fame,
as an artist with a
more refined sense of
form, and as a less
slavish imitator of the
antique. During the
latter half of the nine-
teenth century Per
Hasselberg had a
dominating influence
in Swedish art, and
towards the close of
the century one of his