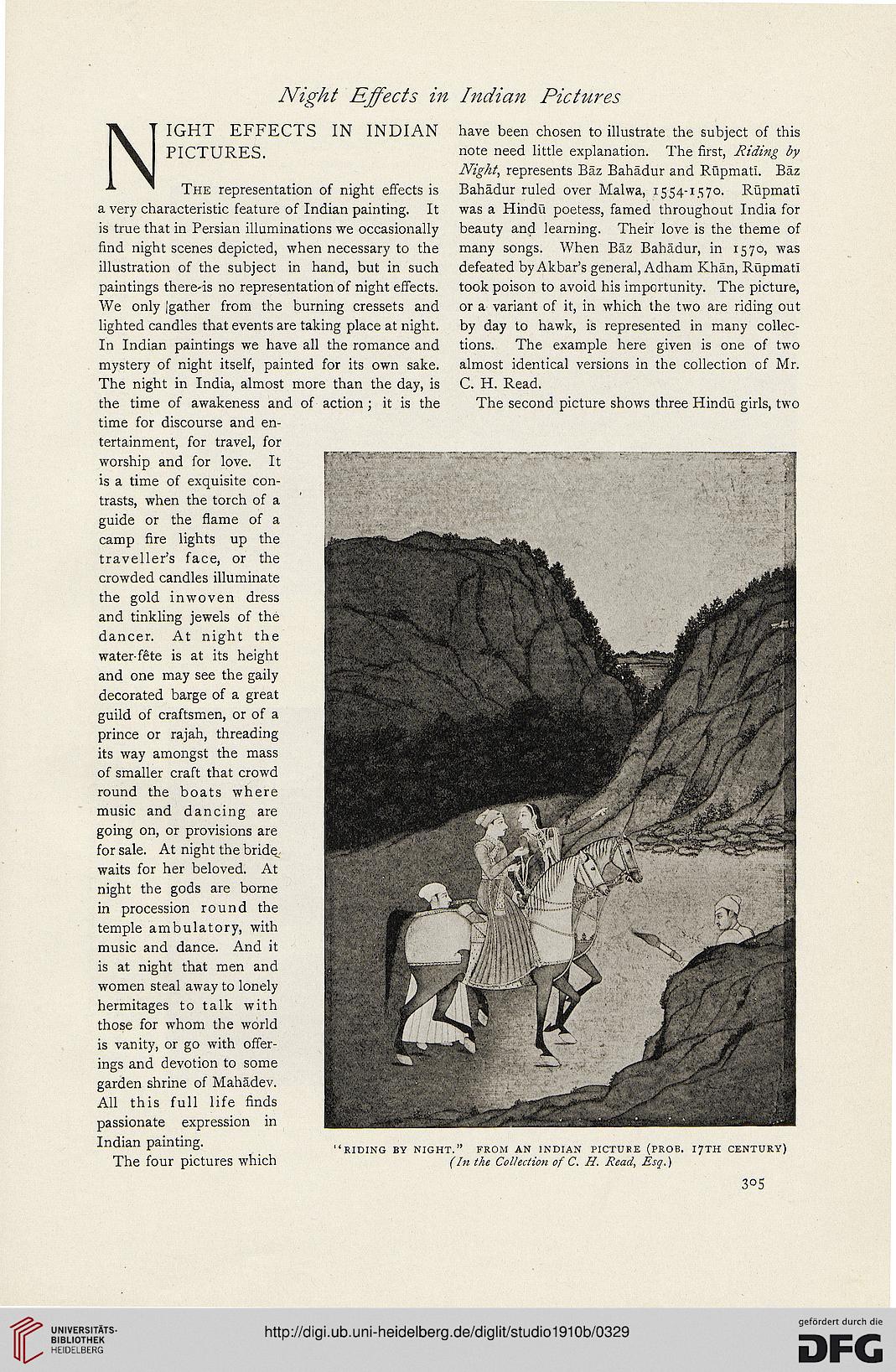 The representation of night effects is
a very characteristic feature of Indian painting. It
is true that in Persian illuminations we occasionally
find night scenes depicted, when necessary to the
illustration of the subject in hand, but in such
paintings there-is no representation of night effects.
We only [gather from the burning cressets and
lighted candles that events are taking place at night.
In Indian paintings we have all the romance and
mystery of night itself, painted for its own sake.
The night in India, almost more than the day, is
the time of awakeness and of action; it is the
time for discourse and en-
tertainment, for travel, for
worship and for love. It
is a time of exquisite con-
trasts, when the torch of a
guide or the flame of a
camp fire lights up the
traveller’s face, or the
crowded candles illuminate
the gold inwoven dress
and tinkling jewels of the
dancer. At night the
water-fete is at its height
and one may see the gaily
decorated barge of a great
guild of craftsmen, or of a
prince or rajah, threading
its way amongst the mass
of smaller craft that crowd
round the boats where
music and dancing are
going on, or provisions are
for sale. At night the bride,
waits for her beloved. At
night the gods are borne
in procession round the
temple ambulatory, with
music and dance. And it
is at night that men and
women steal away to lonely
hermitages to talk with
those for whom the world
is vanity, or go with offer-
ings and devotion to some
garden shrine of Mahadev.

All this full life finds
passionate expression in
Indian painting.

The four pictures which

IN INDIAN have been chosen to illustrate the subject of this
note need little explanation. The first, Riding by
Night, represents Baz Bahadur and Rupmati. Baz
Bahadur ruled over Malwa, 1554-1570. Rupmati
was a Hindu poetess, famed throughout India for
beauty and learning. Their love is the theme of
many songs. When Baz Bahadur, in 1570, was
defeated by Akbar’s general, Adham Khan, Rupmati
took poison to avoid his importunity. The picture,
or a variant of it, in which the two are riding out
by day to hawk, is represented in many collec-
tions. The example here given is one of two
almost identical versions in the collection of Mr.
C. H. Read.