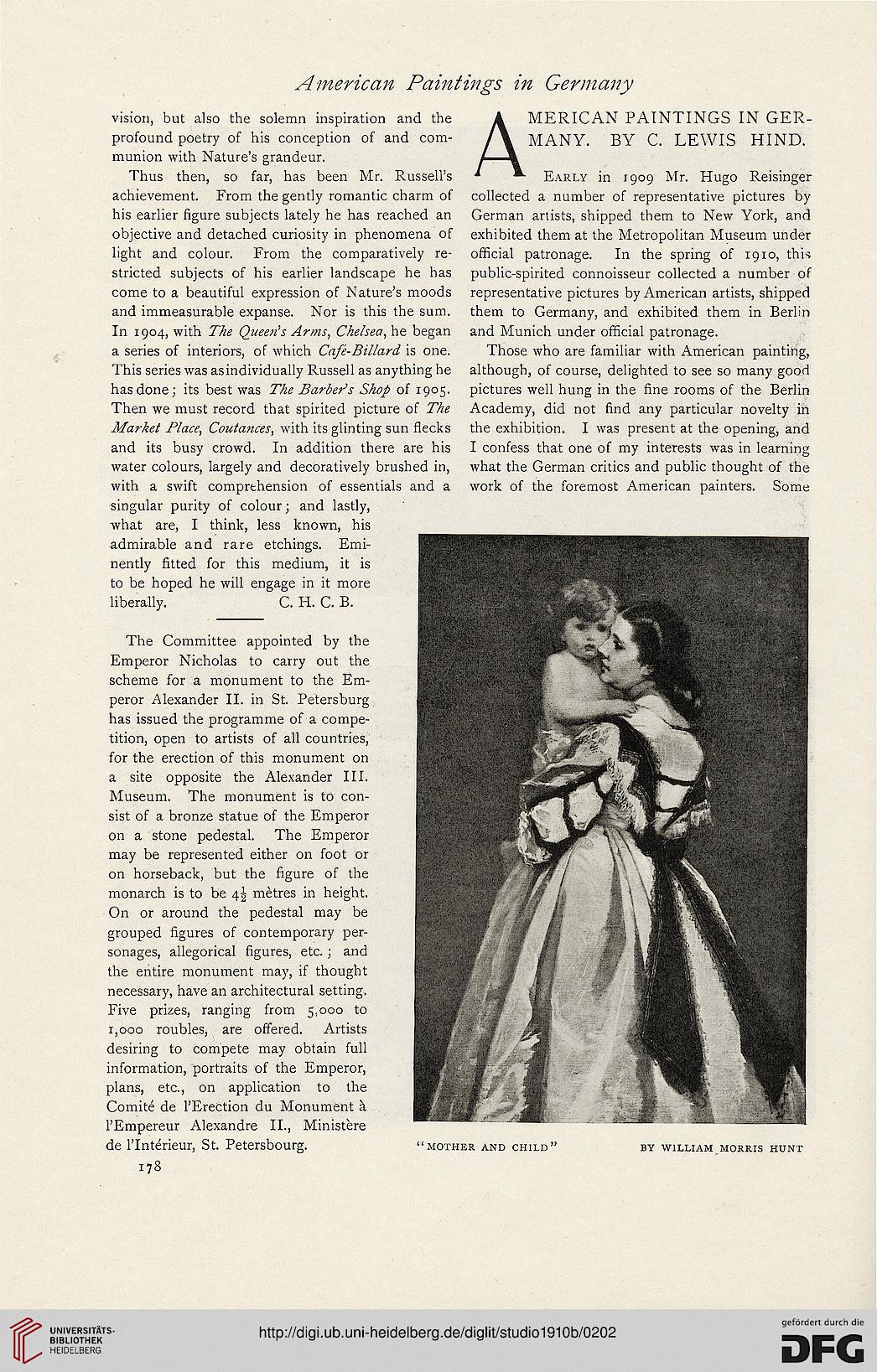 vision, but also the solemn inspiration and the
profound poetry of his conception of and com-
munion with Nature’s grandeur.

Thus then, so far, has been Mr. Russell’s
achievement. From the gently romantic charm of
his earlier figure subjects lately he has reached an
objective and detached curiosity in phenomena of
light and colour. From the comparatively re-
stricted subjects of his earlier landscape he has
come to a beautiful expression of Nature’s moods
and immeasurable expanse. Nor is this the sum.
In 1904, with The Queen's Arms, Chelsea, he began
a series of interiors, of which Cafi-Billard is one.
This series was as individually Russell as anything he
has done; its best was The Barbels Shop of 1905.
Then we must record that spirited picture of The
Market Place, Coutances, with its glinting sun flecks
and its busy crowd. In addition there are his
water colours, largely and decoratively brushed in,
with a swift comprehension of essentials and a
singular purity of colour; and lastly,
what are, I think, less known, his
admirable and rare etchings. Emi-
nently fitted for this medium, it is
to be hoped he will engage in it more
liberally. C. H. C. B.

The Committee appointed by the
Emperor Nicholas to carry out the
scheme for a monument to the Em-
peror Alexander II. in St. Petersburg
has issued the programme of a compe-
tition, open to artists of all countries,
for the erection of this monument on
a site opposite the Alexander III.
Museum. The monument is to con-
sist of a bronze statue of the Emperor
on a stone pedestal. The Emperor
may be represented either on foot or
on horseback, but the figure of the
monarch is to be 4! metres in height.
On or around the pedestal may be
grouped figures of contemporary per-
sonages, allegorical figures, etc.; and
the entire monument may, if thought
necessary, have an architectural setting.
Five prizes, ranging from 5,000 to
1,000 roubles, are offered. Artists
desiring to compete may obtain full
information, portraits of the Emperor,
plans, etc., on application to the
Comite de l’Erection du Monument h.
l’Empereur Alexandre II., Ministere
de l’lnterieur, St. Petersbourg.

American paintings in Ger-
many. BY C. LEWIS HIND.

Those who are familiar with American painting,
although, of course, delighted to see so many good
pictures well hung in the fine rooms of the Berlin
Academy, did not find any particular novelty in
the exhibition. I was present at the opening, and
I confess that one of my interests was in learning
what the German critics and public thought of the
work of the foremost American painters. Some