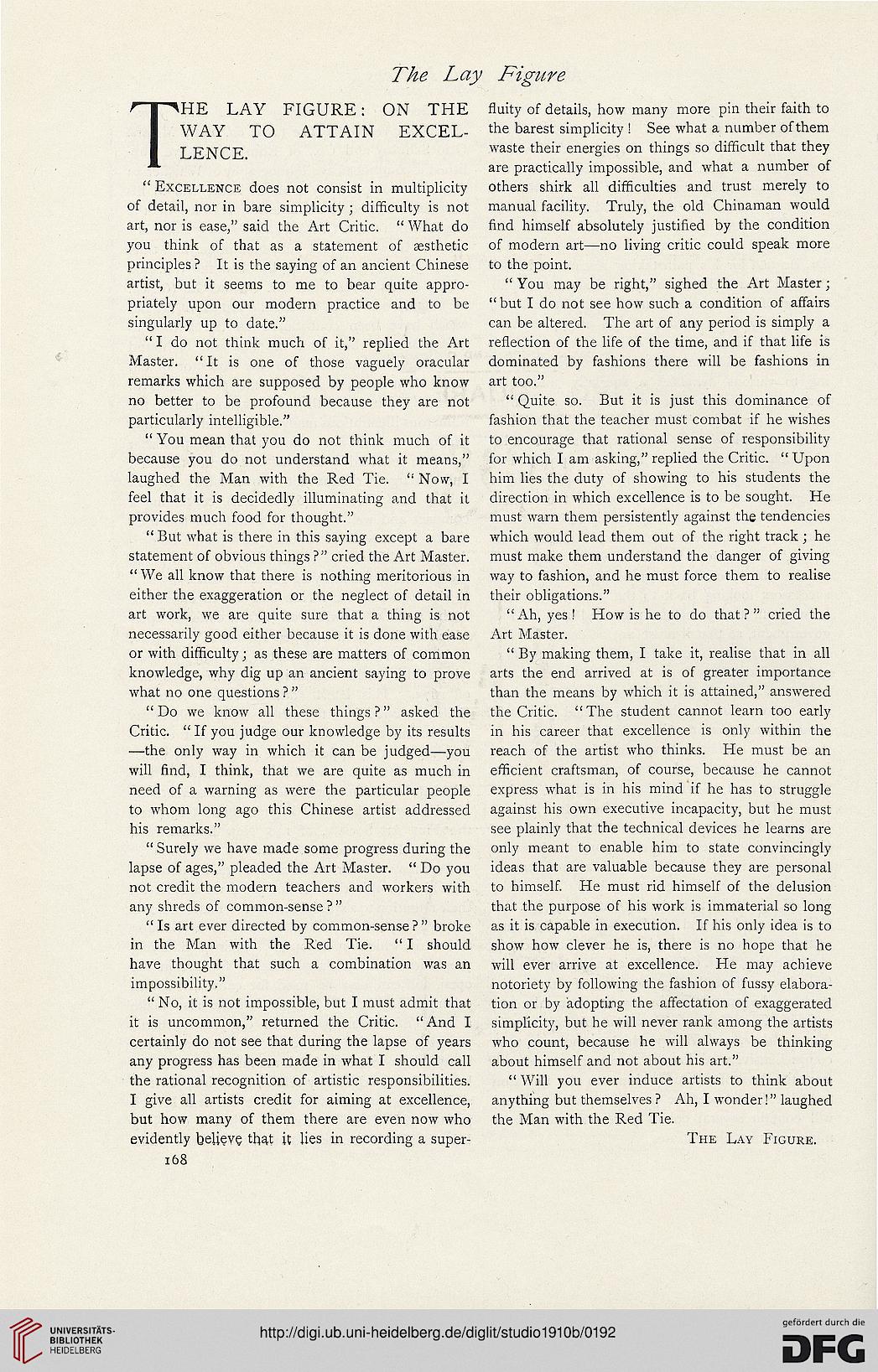 THE LAY FIGURE: ON THE
WAY TO ATTAIN EXCEL-
LENCE.

“ Excellence does not consist in multiplicity
of detail, nor in bare simplicity ; difficulty is not
art, nor is ease,” said the Art Critic. “ What do
you think of that as a statement of sesthetic
principles ? It is the saying of an ancient Chinese
artist, but it seems to me to bear quite appro-
priately upon our modern practice and to be
singularly up to date.”

“ I do not think much of it,” replied the Art
Master. “ It is one of those vaguely oracular
remarks which are supposed by people who know
no better to be profound because they are not
particularly intelligible.”

“ You mean that you do not think much of it
because you do not understand what it means,”
laughed the Man with the Red Tie. “ Now, I
feel that it is decidedly illuminating and that it
provides much food for thought.”

“But what is there in this saying except a bare
statement of obvious things ?” cried the Art Master.
“ We all know that there is nothing meritorious in
either the exaggeration or the neglect of detail in
art work, we are quite sure that a thing is not
necessarily good either because it is done with ease
or with difficulty; as these are matters of common
knowledge, why dig up an ancient saying to prove
what no one questions ? ”

“ Do we know all these things ? ” asked the
Critic. “ If you judge our knowledge by its results
—the only way in which it can be judged—you
will find, I think, that we are quite as much in
need of a warning as were the particular people
to whom long ago this Chinese artist addressed
his remarks.”

“ Surely we have made some progress during the
lapse of ages,” pleaded the Art Master. “ Do you
not credit the modern teachers and workers with
any shreds of common-sense ? ”

“ Is art ever directed by common-sense ? ” broke
in the Man with the Red Tie. “ I should
have thought that such a combination was an
impossibility.”

“ No, it is not impossible, but I must admit that
it is uncommon,” returned the Critic. “And I
certainly do not see that during the lapse of years
any progress has been made in what I should call
the rational recognition of artistic responsibilities.
I give all artists credit for aiming at excellence,
but how many of them there are even now who
evidently believe tb^t it lies in recording a super-
168

fluity of details, how many more pin their faith to
the barest simplicity ! See what a number of them
waste their energies on things so difficult that they
are practically impossible, and what a number of
others shirk all difficulties and trust merely to
manual facility. Truly, the old Chinaman would
find himself absolutely justified by the condition
of modern art—no living critic could speak more
to the point.

“You may be right,” sighed the Art Master;
“but I do not see how such a condition of affairs
can be altered. The art of any period is simply a
reflection of the life of the time, and if that life is
dominated by fashions there will be fashions in
art too.”

“ Quite so. But it is just this dominance of
fashion that the teacher must combat if he wishes
to encourage that rational sense of responsibility
for which I am asking,” replied the Critic. “Upon
him lies the duty of showing to his students the
direction in which excellence is to be sought. He
must warn them persistently against the tendencies
which would lead them out of the right track ; he
must make them understand the danger of giving
way to fashion, and he must force them to realise
their obligations.”

“ By making them, I take it, realise that in all
arts the end arrived at is of greater importance
than the means by which it is attained,” answered
the Critic. “The student cannot learn too early
in his career that excellence is only within the
reach of the artist who thinks. He must be an
efficient craftsman, of course, because he cannot
express what is in his mind if he has to struggle
against his own executive incapacity, but he must
see plainly that the technical devices he learns are
only meant to enable him to state convincingly
ideas that are valuable because they are personal
to himself. He must rid himself of the delusion
that the purpose of his work is immaterial so long
as it is capable in execution. If his only idea is to
show how clever he is, there is no hope that he
will ever arrive at excellence. He may achieve
notoriety by following the fashion of fussy elabora-
tion or by adopting the affectation of exaggerated
simplicity, but he will never rank among the artists
who count, because he will always be thinking
about himself and not about his art.”

“ Will you ever induce artists to think about
anything but themselves ? Ah, I wonder! ” laughed
the Man with the Red Tie.