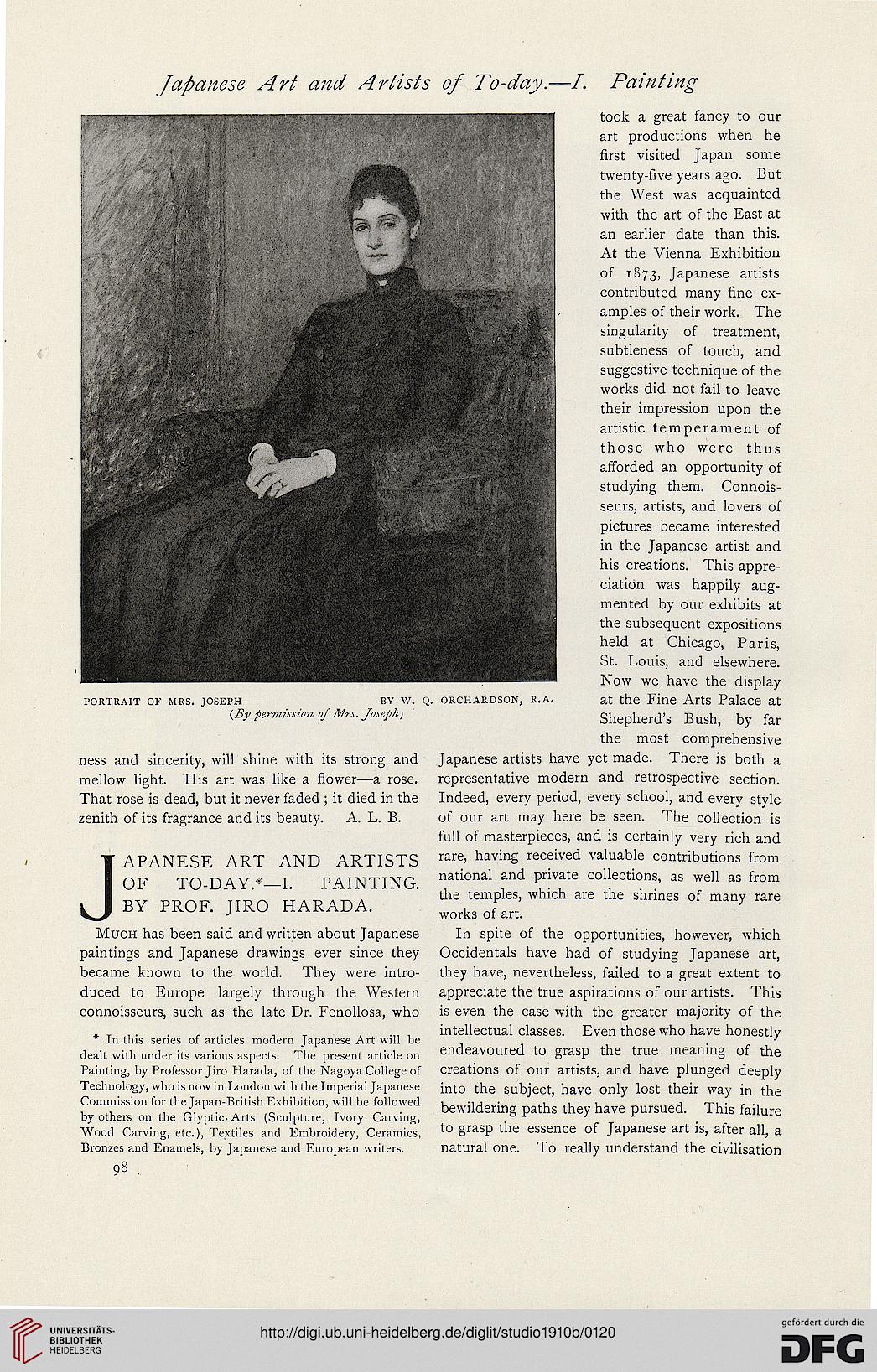 Information about OCR text
Japanese Art and Artists of To-day.—/.

{ By permission of Mrs. Joseph)

ness and sincerity, will shine with its strong and
mellow light. His art was like a flower—a rose.
That rose is dead, but it never faded; it died in the
zenith of its fragrance and its beauty. A. L. B.

Much has been said and written about Japanese
paintings and Japanese drawings ever since they
became known to the world. They were intro-
duced to Europe largely through the Western
connoisseurs, such as the late Dr. Fenollosa, who

* In this series of articles modern Japanese Art will be
dealt with under its various aspects. The present article on
Painting, by Professor Jiro Harada, of the Nagoya College of
Technology, who is now in London with the Imperial Japanese
Commission for the Japan-British Exhibition, will be followed
by others on the Glyptic. Arts (Sculpture, Ivory Carving,
Wood Carving, etc.), Textiles and Embroidery, Ceramics,
Bronzes and Enamels, by Japanese and European writers.

took a great fancy to our
art productions when he
first visited Japan some
twenty-five years ago. But
the West was acquainted
with the art of the East at
an earlier date than this.
At the Vienna Exhibition
of 1873, Japanese artists
contributed many fine ex-
amples of their work. The
singularity of treatment,
subtleness of touch, and
suggestive technique of the
works did not fail to leave
their impression upon the
artistic temperament of
those who were thus
afforded an opportunity of
studying them. Connois-
seurs, artists, and lovers of
pictures became interested
in the Japanese artist and
his creations. This appre-
ciation was happily aug-
mented by our exhibits at
the subsequent expositions
held at Chicago, Paris,
St. Louis, and elsewhere.
Now we have the display
at the Fine Arts Palace at
Shepherd’s Bush, by far
the most comprehensive
Japanese artists have yet made. There is both a
representative modern and retrospective section.
Indeed, every period, every school, and every style
of our art may here be seen. The collection is
full of masterpieces, and is certainly very rich and
rare, having received valuable contributions from
national and private collections, as well as from
the temples, which are the shrines of many rare
works of art.

In spite of the opportunities, however, which
Occidentals have had of studying Japanese art,
they have, nevertheless, failed to a great extent to
appreciate the true aspirations of our artists. This
is even the case with the greater majority of the
intellectual classes. Even those who have honestly
endeavoured to grasp the true meaning of the
creations of our artists, and have plunged deeply
into the subject, have only lost their way in the
bewildering paths they have pursued. This failure
to grasp the essence of Japanese art is, after all, a
natural one. To really understand the civilisation