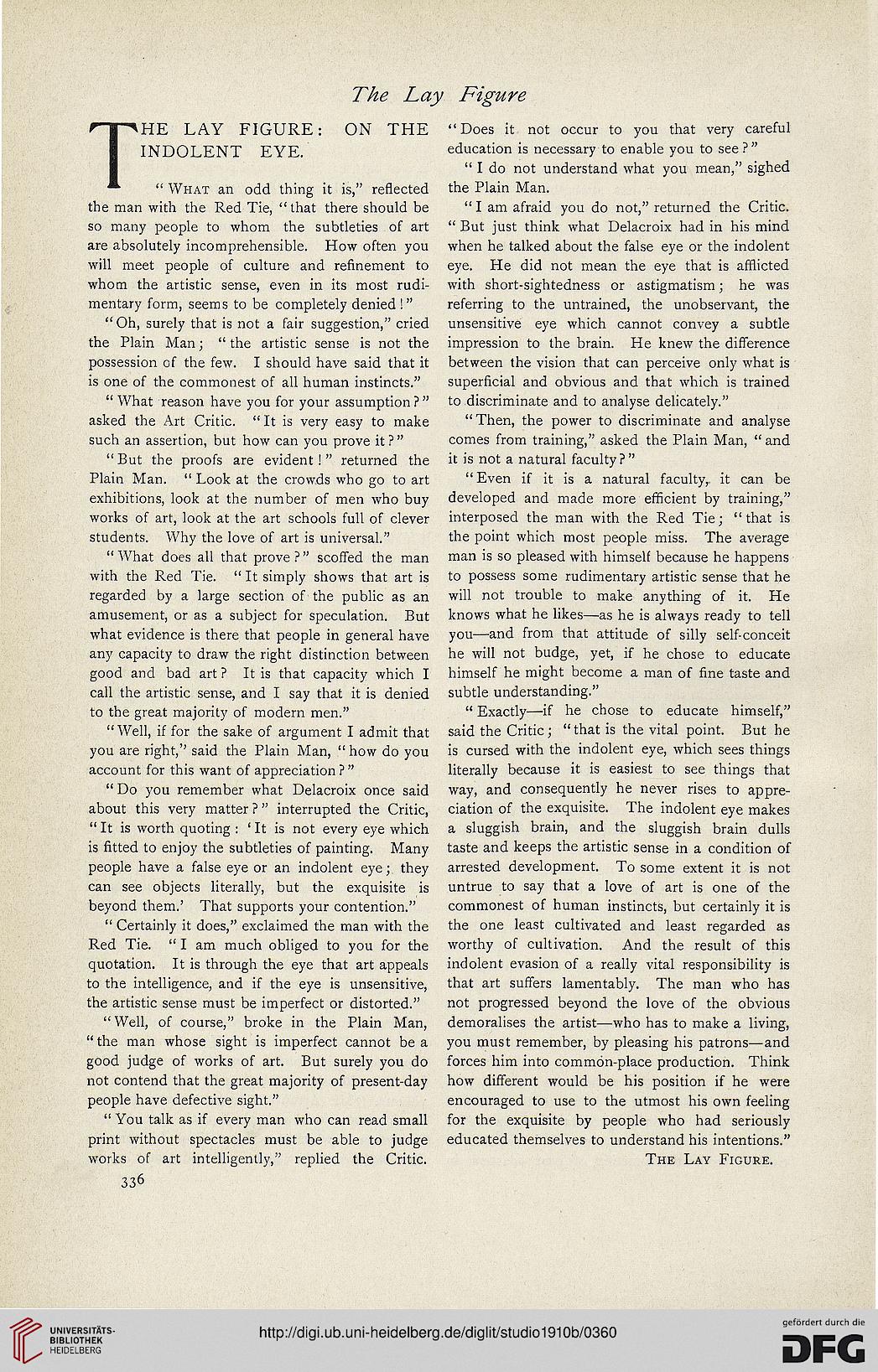 “ What an odd thing it is,” reflected
the man with the Red Tie, “that there should be
so many people to whom the subtleties of art
are absolutely incomprehensible. How often you
will meet people of culture and refinement to
whom the artistic sense, even in its most rudi-
mentary form, seems to be completely denied!”

“ Oh, surely that is not a fair suggestion,” cried
the Plain Man; “ the artistic sense is not the
possession of the few. I should have said that it
is one of the commonest of all human instincts.”

“ What reason have you for your assumption ? ”
asked the Art Critic. “ It is very easy to make
such an assertion, but how can you prove it ? ”
“But the proofs are evident!” returned the
Plain Man. “ Look at the crowds who go to art
exhibitions, look at the number of men who buy
works of art, look at the art schools full of clever
students. Why the love of art is universal.”
“What does all that prove?” scoffed the man
with the Red Tie. “ It simply shows that art is
regarded by a large section of the public as an
amusement, or as a subject for speculation. But
what evidence is there that people in general have
any capacity to draw the right distinction between
good and bad art ? It is that capacity which I
call the artistic sense, and I say that it is denied
to the great majority of modern men.”

“Well, if for the sake of argument I admit that
you are right,’’ said the Plain Man, “ how do you
account for this want of appreciation ?”

“ Do you remember what Delacroix once said
about this very matter ? ” interrupted the Critic,
“It is worth quoting : ‘ It is not every eye which
is fitted to enjoy the subtleties of painting. Many
people have a false eye or an indolent eye; they
can see objects literally, but the exquisite is
beyond them.’ That supports your contention.”

“ Certainly it does,” exclaimed the man with the
Red Tie. “ I am much obliged to you for the
quotation. It is through the eye that art appeals
to the intelligence, and if the eye is unsensitive,
the artistic sense must be imperfect or distorted.”
“Well, of course,” broke in the Plain Man,
“ the man whose sight is imperfect cannot be a
good judge of works of art. But surely you do
not contend that the great majority of present-day
people have defective sight.”

“ You talk as if every man who can read small
print without spectacles must be able to judge
works of art intelligently,” replied the Critic.

“Does it not occur to you that very careful
education is necessary to enable you to see ? ”

“ I do not understand what you mean,” sighed
the Plain Man.

“ I am afraid you do not,” returned the Critic.
“ But just think what Delacroix had in his mind
when he talked about the false eye or the indolent
eye. He did not mean the eye that is afflicted
with short-sightedness or astigmatism; he was
referring to the untrained, the unobservant, the
unsensitive eye which cannot convey a subtle
impression to the brain. He knew the difference
between the vision that can perceive only what is
superficial and obvious and that which is trained
to discriminate and to analyse delicately.”

“Then, the power to discriminate and analyse
comes from training,” asked the Plain Man, “ and
it is not a natural faculty?”

“ Even if it is a natural faculty, it can be
developed and made more efficient by training,”
interposed the man with the Red Tie; “that is
the point which most people miss. The average
man is so pleased with himself because he happens
to possess some rudimentary artistic sense that he
will not trouble to make anything of it. He
knows what he likes—as he is always ready to tell
you—and from that attitude of silly self-conceit
he will not budge, yet, if he chose to educate
himself he might become a man of fine taste and
subtle understanding.”

“ Exactly—if he chose to educate himself,”
said the Critic; “ that is the vital point. But he
is cursed with the indolent eye, which sees things
literally because it is easiest to see things that
way, and consequently he never rises to appre-
ciation of the exquisite. The indolent eye makes
a sluggish brain, and the sluggish brain dulls
taste and keeps the artistic sense in a condition of
arrested development. To some extent it is not
untrue to say that a love of art is one of the
commonest of human instincts, but certainly it is
the one least cultivated and least regarded as
worthy of cultivation. And the result of this
indolent evasion of a really vital responsibility is
that art suffers lamentably. The man who has
not progressed beyond the love of the obvious
demoralises the artist—who has to make a living,
you must remember, by pleasing his patrons—and
forces him into common-place production. Think
how different would be his position if he were
encouraged to use to the utmost his own feeling
for the exquisite by people who had seriously
educated themselves to understand his intentions.”