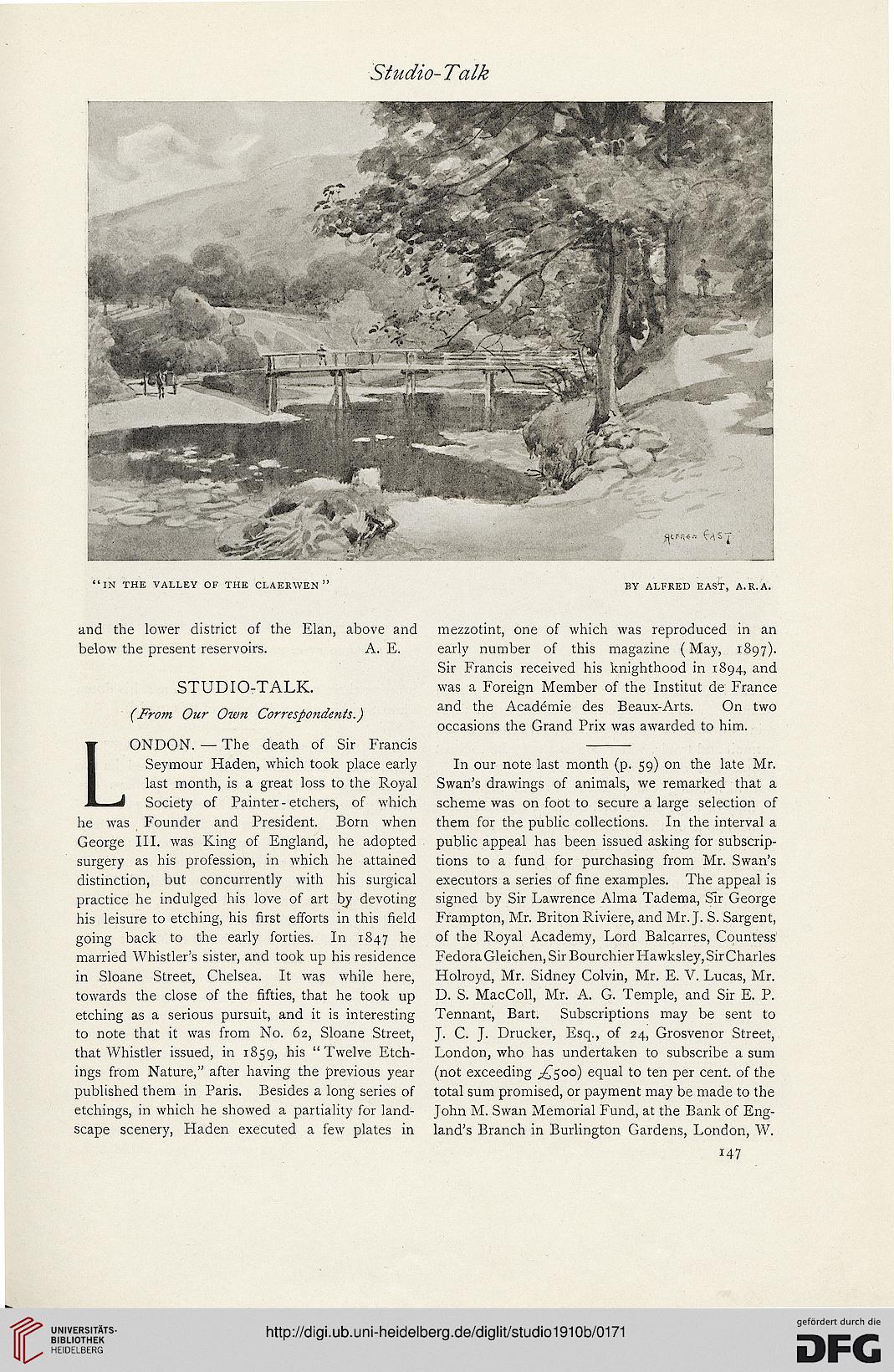 “IN THE VALLEY OF THE CLAERWEN ”

and the lower district of the Elan, above and
below the present reservoirs. A. E.

LONDON. — The death of Sir Francis
Seymour Haden, which took place early
last month, is a great loss to the Royal
Society of Painter - etchers, of which
he was Founder and President. Born when
George III. was King of England, he adopted
surgery as his profession, in which he attained
distinction, but concurrently with his surgical
practice he indulged his love of art bj devoting
his leisure to etching, his first efforts in this field
going back to the early forties. In 1847 he
married Whistler’s sister, and took up his residence
in Sloane Street, Chelsea. It was while here,
towards the close of the fifties, that he took up
etching as a serious pursuit, and it is interesting
to note that it was from No. 62, Sloane Street,
that Whistler issued, in 1859, his “Twelve Etch-
ings from Nature,” after having the previous year
published them in Paris. Besides a long series of
etchings, in which he showed a partiality for land-
scape scenery, Haden executed a few plates in

mezzotint, one of which was reproduced in an
early number of this magazine (May, 1897).
Sir Francis received his knighthood in 1894, and
was a Foreign Member of the Institut de France
and the Academie des Beaux-Arts. On two
occasions the Grand Prix was awarded to him.

In our note last month (p. 59) on the late Mr.
Swan’s drawings of animals, we remarked that a
scheme was on foot to secure a large selection of
them for the public collections. In the interval a
public appeal has been issued asking for subscrip-
tions to a fund for purchasing from Mr. Swan’s
executors a series of fine examples. The appeal is
signed by Sir Lawrence Alma Tadema, Sir George
Frampton, Mr. Briton Riviere, and Mr. J. S. Sargent,
of the Royal Academy, Lord Balcarres, Countess
Fedora Gleichen, Sir Bourchier Hawksley, Sir Charles
Holroyd, Mr. Sidney Colvin, Mr. E. V. Lucas, Mr.
D. S. MacColl, Mr. A. G. Temple, and Sir E. P.
Tennant, Bart. Subscriptions may be sent to
J. C. J. Drucker, Esq., of 24, Grosvenor Street,
London, who has undertaken to subscribe a sum
(not exceeding T5°°) equal to ten per cent, of the
total sum promised, or payment may be made to the
John M. Swan Memorial Fund, at the Bank of Eng-
land’s Branch in Burlington Gardens, London, W.