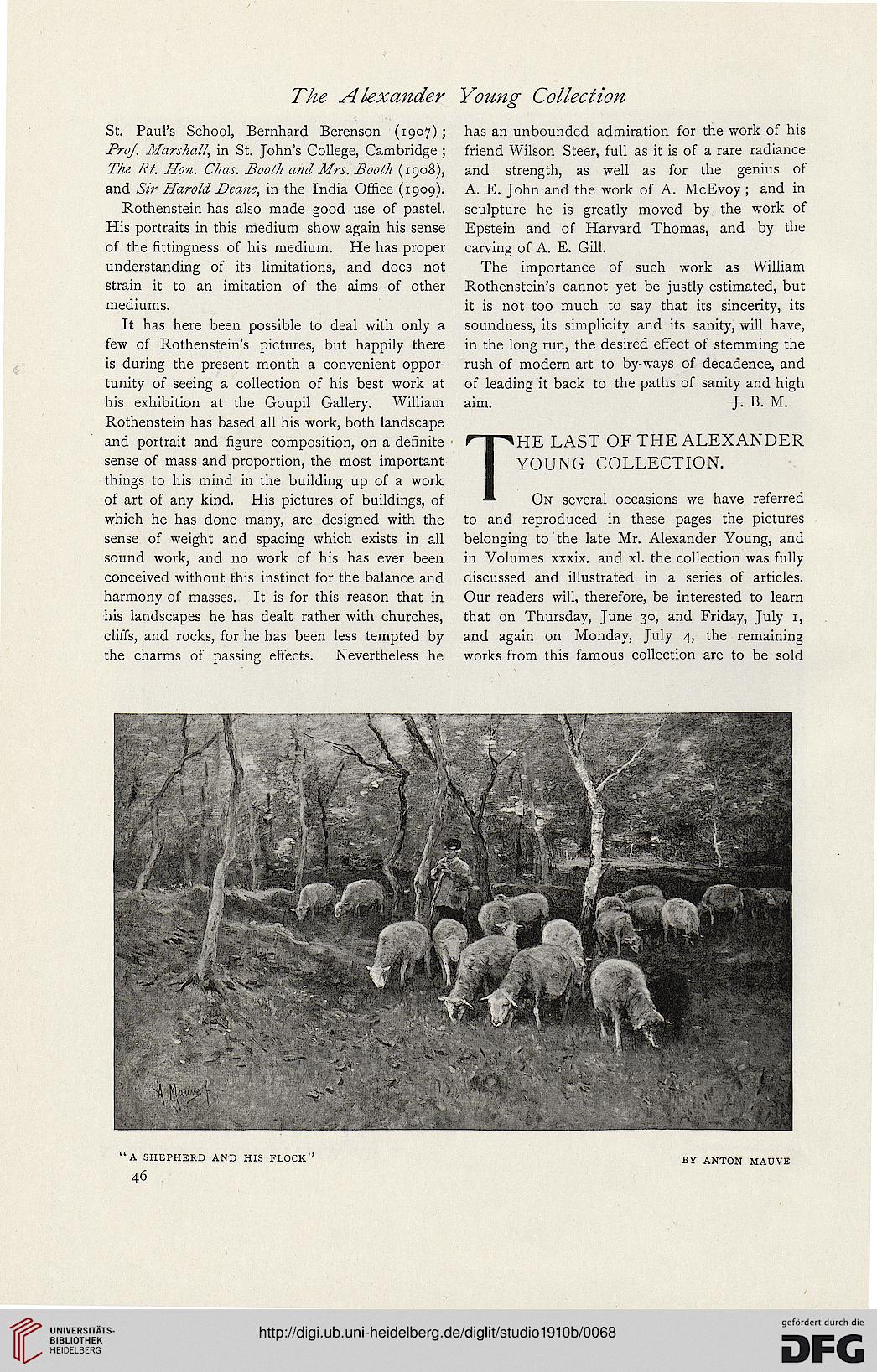 Rothenstein has also made good use of pastel.
His portraits in this medium show again his sense
of the fittingness of his medium. He has proper
understanding of its limitations, and does not
strain it to an imitation of the aims of other
mediums.

It has here been possible to deal with only a
few of Rothenstein’s pictures, but happily there
is during the present month a convenient oppor-
tunity of seeing a collection of his best work at
his exhibition at the Goupil Gallery. William
Rothenstein has based all his work, both landscape
and portrait and figure composition, on a definite
sense of mass and proportion, the most important
things to his mind in the building up of a work
of art of any kind. His pictures of buildings, of
which he has done many, are designed with the
sense of weight and spacing which exists in all
sound work, and no work of his has ever been
conceived without this instinct for the balance and
harmony of masses. It is for this reason that in
his landscapes he has dealt rather with churches,
cliffs, and rocks, for he has been less tempted by
the charms of passing effects. Nevertheless he

has an unbounded admiration for the work of his
friend Wilson Steer, full as it is of a rare radiance
and strength, as well as for the genius of
A. E. John and the work of A. McEvoy ; and in
sculpture he is greatly moved by the work of
Epstein and of Harvard Thomas, and by the
carving of A. E. Gill.

The importance of such work as William
Rothenstein’s cannot yet be justly estimated, but
it is not too much to say that its sincerity, its
soundness, its simplicity and its sanity, will have,
in the long run, the desired effect of stemming the
rush of modern art to by-ways of decadence, and
of leading it back to the paths of sanity and high
aim. J. B. M.

HE LAST OF THE ALEXANDER
YOUNG COLLECTION.

On several occasions we have referred
to and reproduced in these pages the pictures
belonging to the late Mr. Alexander Young, and
in Volumes xxxix. and xl. the collection was fully
discussed and illustrated in a series of articles.
Our readers will, therefore, be interested to learn
that on Thursday, June 30, and Friday, July 1,
and again on Monday, July 4, the remaining
works from this famous collection are to be sold