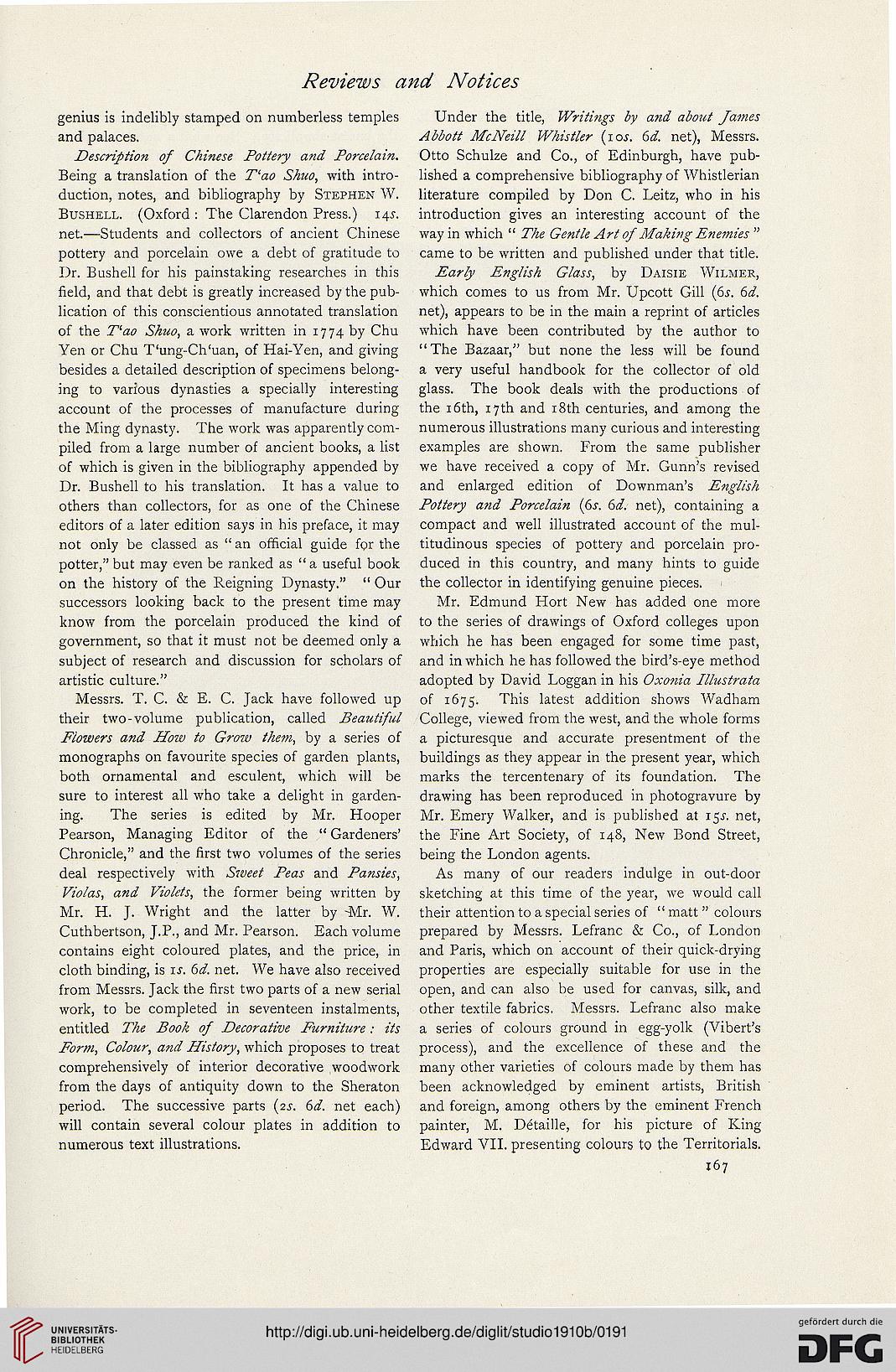 genius is indelibly stamped on numberless temples
and palaces.

Description of Chinese Pottery and Porcelain.
Being a translation of the T‘ao Shuo, with intro-
duction, notes, and bibliography by Stephen W.
Bushell. (Oxford : The Clarendon Press.) 14$.
net.—Students and collectors of ancient Chinese
pottery and porcelain owe a debt of gratitude to
Dr. Bushell for his painstaking researches in this
field, and that debt is greatly increased by the pub-
lication of this conscientious annotated translation
of the Dao Shuo, a work written in 1774 by Chu
Yen or Chu T‘ung-Ch‘uan, of Hai-Yen, and giving
besides a detailed description of specimens belong-
ing to various dynasties a specially interesting
account of the processes of manufacture during
the Ming dynasty. The work was apparently com-
piled from a large number of ancient books, a list
of which is given in the bibliography appended by
Dr. Bushell to his translation. It has a value to
others than collectors, for as one of the Chinese
editors of a later edition says in his preface, it may
not only be classed as “ an official guide for the
potter,” but may even be ranked as “a useful book
on the history of the Reigning Dynasty.” “ Our
successors looking back to the present time may
know from the porcelain produced the kind of
government, so that it must not be deemed only a
subject of research and discussion for scholars of
artistic culture.”

Messrs. T. C. & E. C. Jack have followed up
their two-volume publication, called Beautiful
Flowers arid How to Grow them, by a series of
monographs on favourite species of garden plants,
both ornamental and esculent, which will be
sure to interest all who take a delight in garden-
ing. The series is edited by Mr. Hooper
Pearson, Managing Editor of the “ Gardeners’
Chronicle,” and the first two volumes of the series
deal respectively with Sweet Peas and Pansies,
Violas, and Violets, the former being written by
Mr. H. J. Wright and the latter by -Mr. W.
Cuthbertson, J.P., and Mr. Pearson. Each volume
contains eight coloured plates, and the price, in
cloth binding, is ir. 6d. net. We have also received
from Messrs. Jack the first two parts of a new serial
work, to be completed in seventeen instalments,
entitled The Book of Decorative Furniture: its
Form, Colour, and History, which proposes to treat
comprehensively of interior decorative woodwork
from the days of antiquity down to the Sheraton
period. The successive parts (25-. 6d. net each)
will contain several colour plates in addition to
numerous text illustrations.

Under the title, Writings by and about fames
Abbott McNeill Whistler (io.y. 6d. net), Messrs.
Otto Schulze and Co., of Edinburgh, have pub-
lished a comprehensive bibliography of Whistlerian
literature compiled by Don C. Leitz, who in his
introduction gives an interesting account of the
way in which “ The Gentle Art of Making Enemies ”
came to be written and published under that title.

Early English Glass, by Daisie Wilmer,
which comes to us from Mr. Upcott Gill (6s. 6d.
net), appears to be in the main a reprint of articles
which have been contributed by the author to
“The Bazaar,” but none the less will be found
a very useful handbook for the collector of old
glass. The book deals with the productions of
the 16th, 17th and 18th centuries, and among the
numerous illustrations many curious and interesting
examples are shown. From the same publisher
we have received a copy of Mr. Gunn’s revised
and enlarged edition of Downman’s English
Pottery and Porcelain (6s. 6d. net), containing a
compact and well illustrated account of the mul-
titudinous species of pottery and porcelain pro-
duced in this country, and many hints to guide
the collector in identifying genuine pieces.

Mr. Edmund Hort New has added one more
to the series of drawings of Oxford colleges upon
which he has been engaged for some time past,
and in which he has followed the bird’s-eye method
adopted by David Loggan in his Oxonia Illustrata
of 1675. This latest addition shows Wadham
College, viewed from the west, and the whole forms
a picturesque and accurate presentment of the
buildings as they appear in the present year, which
marks the tercentenary of its foundation. The
drawing has been reproduced in photogravure by
Mr. Emery Walker, and is published at 15^. net,
the Fine Art Society, of 148, New Bond Street,
being the London agents.

As many of our readers indulge in out-door
sketching at this time of the year, we would call
their attention to a special series of “ matt ” colours
prepared by Messrs. Lefranc & Co., of London
and Paris, which on account of their quick-drying
properties are especially suitable for use in the
open, and can also be used for canvas, silk, and
other textile fabrics. Messrs. Lefranc also make
a series of colours ground in egg-yolk (Vibert’s
process), and the excellence of these and the
many other varieties of colours made by them has
been acknowledged by eminent artists, British
and foreign, among others by the eminent French
painter, M. D6taille, for his picture of King
Edward VII. presenting colours to the Territorials.