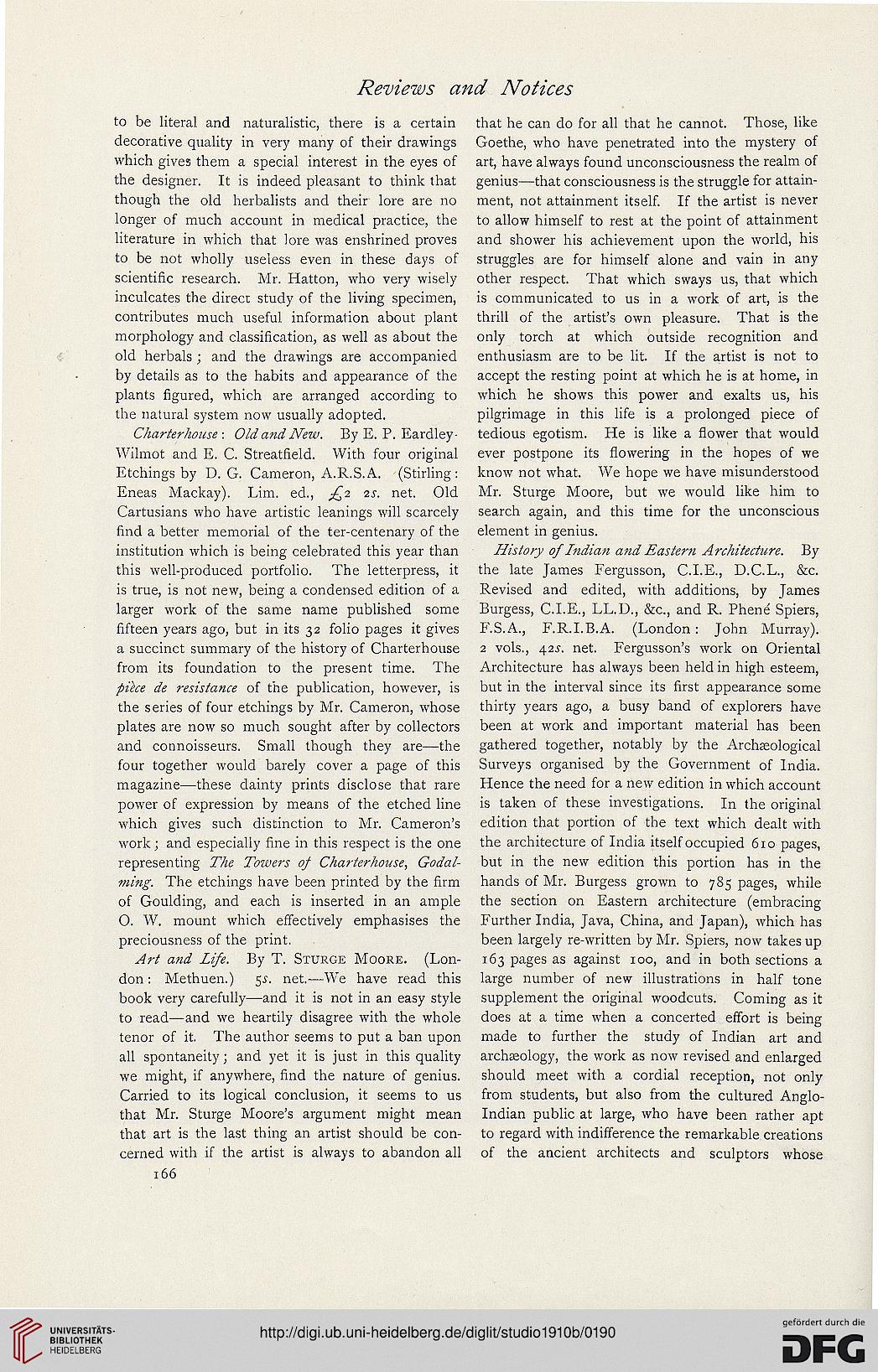 to be literal and naturalistic, there is a certain
decorative quality in very many of their drawings
which gives them a special interest in the eyes of
the designer. It is indeed pleasant to think that
though the old herbalists and their lore are no
longer of much account in medical practice, the
literature in which that lore was enshrined proves
to be not wholly useless even in these days of
scientific research. Mr. Hatton, who very wisely
inculcates the direct study of the living specimen,
contributes much useful information about plant
morphology and classification, as well as about the
old herbals; and the drawings are accompanied
by details as to the habits and appearance of the
plants figured, which are arranged according to
the natural system now usually adopted.

Charterhouse : Old and New. By E. P. Eardley-
Wilmot and E. C. Streatfield. With four original
Etchings by D. G. Cameron, A.R.S.A. (Stirling:
Eneas Mackay). Lim. ed., R2 2s. net. Old
Cartusians who have artistic leanings will scarcely
find a better memorial of the ter-centenary of the
institution which is being celebrated this year than
this well-produced portfolio. The letterpress, it
is true, is not new, being a condensed edition of a
larger work of the same name published some
fifteen years ago, but in its 32 folio pages it gives
a succinct summary of the history of Charterhouse
from its foundation to the present time. The
piece de resistance of the publication, however, is
the series of four etchings by Mr. Cameron, whose
plates are now so much sought after by collectors
and connoisseurs. Small though they are—the
four together would barely cover a page of this
magazine—these dainty prints disclose that rare
power of expression by means of the etched line
which gives such distinction to Mr. Cameron’s
work; and especially fine in this respect is the one
representing The Towers oj Charterhouse, Godai-
ming. The etchings have been printed by the firm
of Goulding, and each is inserted in an ample
O. W. mount which effectively emphasises the
preciousness of the print.

Art and Life. By T. Sturge Moore. (Lon-
don : Methuen.) 5^. net.-—We have read this
book very carefully—and it is not in an easy style
to read—and we heartily disagree with the whole
tenor of it. The author seems to put a ban upon
all spontaneity; and yet it is just in this quality
we might, if anywhere, find the nature of genius.
Carried to its logical conclusion, it seems to us
that Mr. Sturge Moore’s argument might mean
that art is the last thing an artist should be con-
cerned with if the artist is always to abandon all
166

that he can do for all that he cannot. Those, like
Goethe, who have penetrated into the mystery of
art, have always found unconsciousness the realm of
genius—that consciousness is the struggle for attain-
ment, not attainment itself. If the artist is never
to allow himself to rest at the point of attainment
and shower his achievement upon the world, his
struggles are for himself alone and vain in any
other respect. That which sways us, that which
is communicated to us in a work of art, is the
thrill of the artist’s own pleasure. That is the
only torch at which outside recognition and
enthusiasm are to be lit. If the artist is not to
accept the resting point at which he is at home, in
which he shows this power and exalts us, his
pilgrimage in this life is a prolonged piece of
tedious egotism. He is like a flower that would
ever postpone its flowering in the hopes of we
know not what. We hope we have misunderstood
Mr. Sturge Moore, but we would like him to
search again, and this time for the unconscious
element in genius.

2 vols., \2S. net. Fergusson’s work on Oriental
Architecture has always been held in high esteem,
but in the interval since its first appearance some
thirty years ago, a busy band of explorers have
been at work and important material has been
gathered together, notably by the Archaeological
Surveys organised by the Government of India.
Hence the need for a new edition in which account
is taken of these investigations. In the original
edition that portion of the text which dealt with
the architecture of India itself occupied 610 pages,
but in the new edition this portion has in the
hands of Mr. Burgess grown to 785 pages, while
the section on Eastern architecture (embracing
Further India, Java, China, and Japan), which has
been largely re-written by Mr. Spiers, now takes up
163 pages as against 100, and in both sections a
large number of new illustrations in half tone
supplement the original woodcuts. Coming as it
does at a time when a concerted effort is being
made to further the study of Indian art and
archaeology, the work as now revised and enlarged
should meet with a cordial reception, not only
from students, but also from the cultured Anglo-
Indian public at large, who have been rather apt
to regard with indifference the remarkable creations
of the ancient architects and sculptors whose