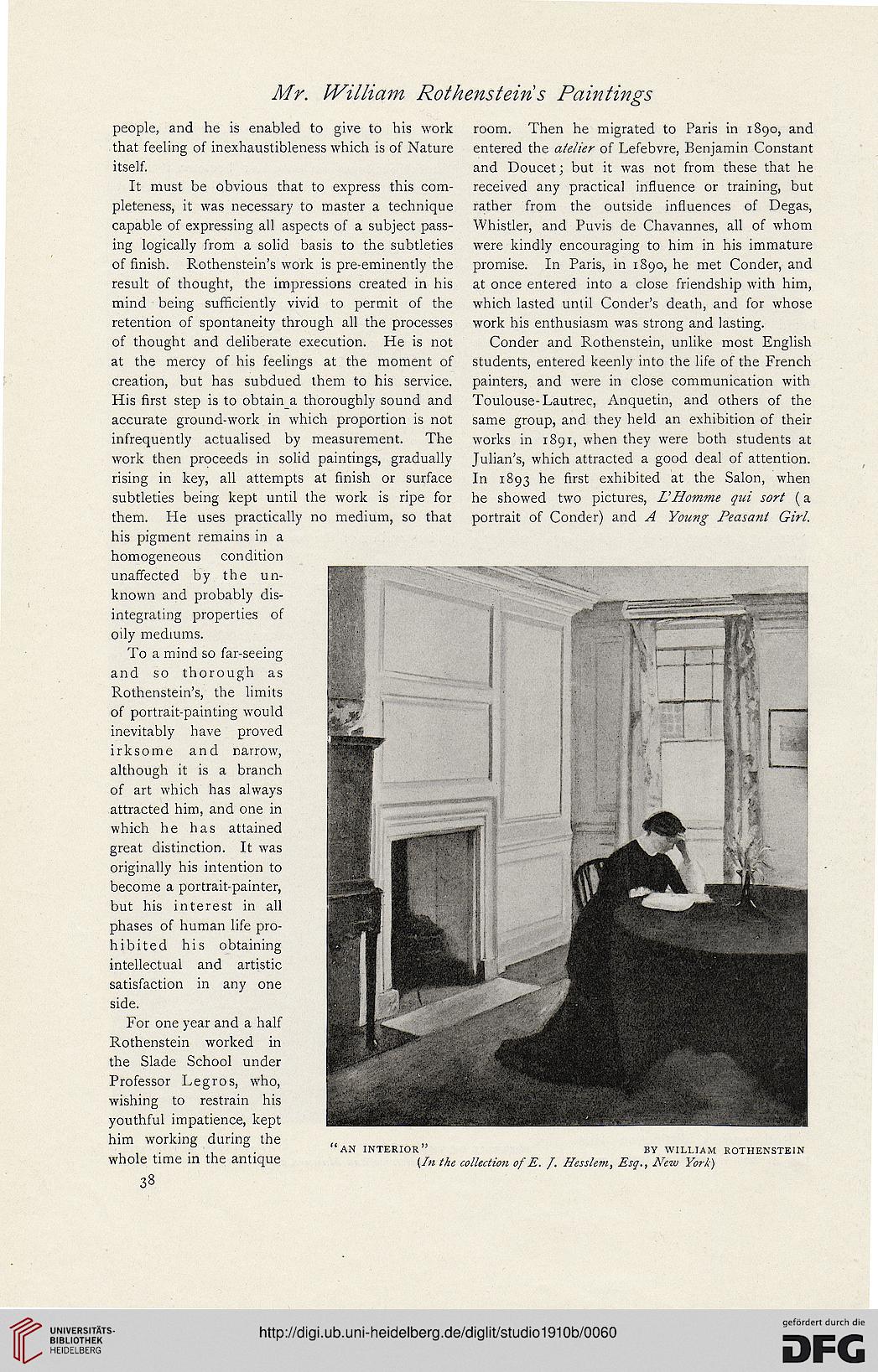 people, and he is enabled to give to his work
that feeling of inexhaustibleness which is of Nature
itself.

It must be obvious that to express this com-
pleteness, it was necessary to master a technique
capable of expressing all aspects of a subject pass-
ing logically from a solid basis to the subtleties
of finish. Rothenstein’s work is pre-eminently the
result of thought, the impressions created in his
mind being sufficiently vivid to permit of the
retention of spontaneity through all the processes
of thought and deliberate execution. He is not
at the mercy of his feelings at the moment of
creation, but has subdued them to his service.
His first step is to obtain a thoroughly sound and
accurate ground-work in which proportion is not
infrequently actualised by measurement. The
work then proceeds in solid paintings, gradually
rising in key, all attempts at finish or surface
subtleties being kept until the work is ripe for
them. He uses practically no medium, so that
his pigment remains in a
homogeneous condition
unaffected by the un-
known and probably dis-
integrating properties of
oily mediums.

To a mind so far-seeing
and so thorough as
Rothenstein’s, the limits
of portrait-painting would
inevitably have proved
irksome and narrow,
although it is a branch
of art which has always
attracted him, and one in
which he has attained
great distinction. It was
originally his intention to
become a portrait-painter,
but his interest in all
phases of human life pro-
hibited his obtaining
intellectual and artistic
satisfaction in any one
side.

For one year and a half
Rothenstein worked in
the Slade School under
Professor Legros, who,
wishing to restrain his
youthful impatience, kept
him working during the
whole time in the antique
38

room. Then he migrated to Paris in 1890, and
entered the atelier of Lefebvre, Benjamin Constant
and Doucet; but it was not from these that he
received any practical influence or training, but
rather from the outside influences of Degas,
Whistler, and Puvis de Chavannes, all of whom
were kindly encouraging to him in his immature
promise. In Paris, in 1890, he met Conder, and
at once entered into a close friendship with him,
which lasted until Conder’s death, and for whose
work his enthusiasm was strong and lasting.

Conder and Rothenstein, unlike most English
students, entered keenly into the life of the French
painters, and were in close communication with
Toulouse-Lautrec, Anquetin, and others of the
same group, and they held an exhibition of their
works in 1891, when they were both students at
Julian’s, which attracted a good deal of attention.
In 1893 he first exhibited at the Salon, when
he showed two pictures, LHomme qui sort (a
portrait of Conder) and A Young Peasant Girl.

“an interior” by william rothenstein