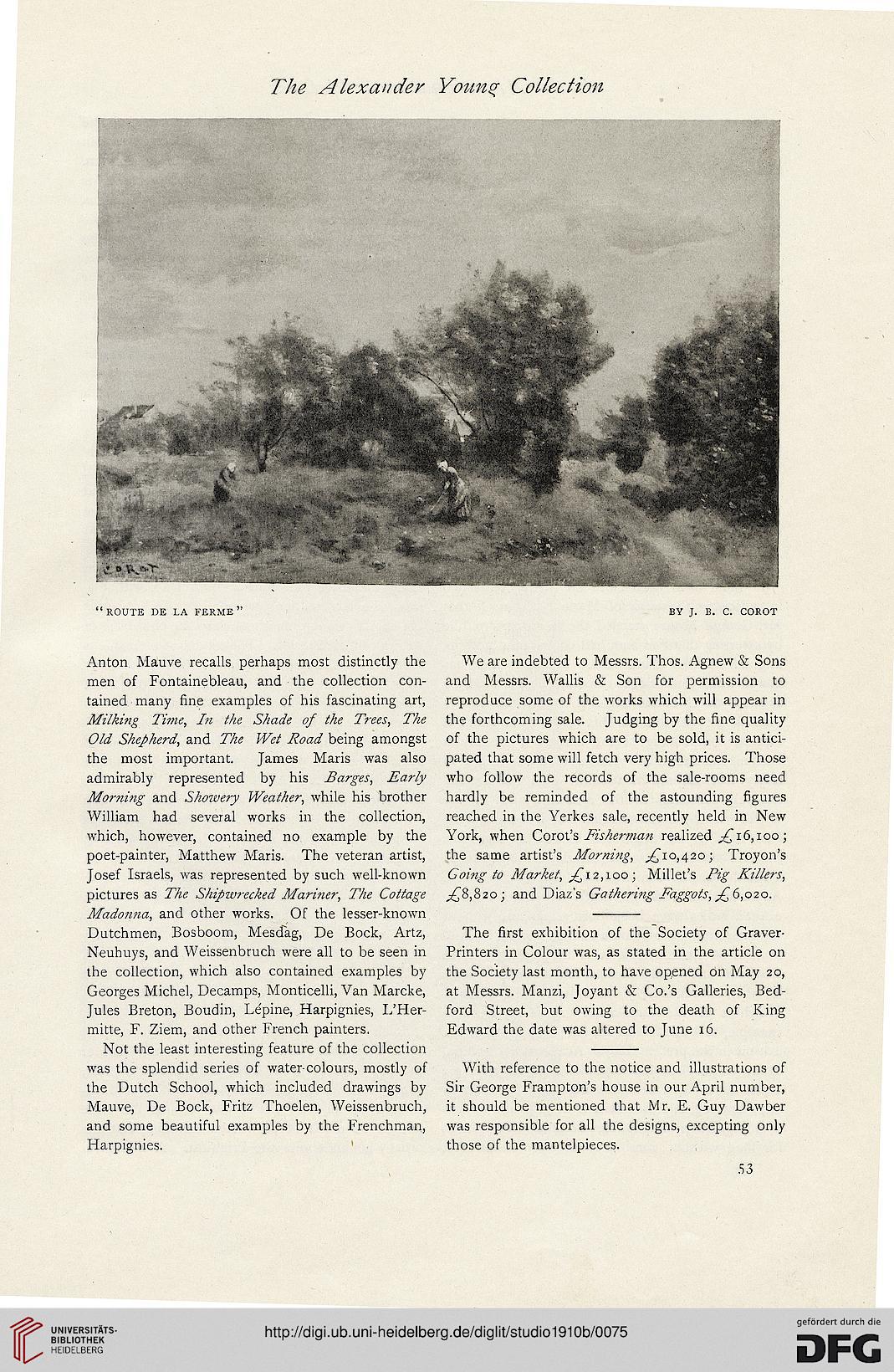 Anton Mauve recalls perhaps most distinctly the
men of Fontainebleau, and the collection con-
tained many fine examples of his fascinating art,
Alilking Time, In the Shade of the Trees, The
Old Shepherd, and The Wet Road being amongst
the most important. James Maris was also
admirably represented by his Barges, Early
Morning and Showery Weather, while his brother
William had several works in the collection,
which, however, contained no example by the
poet-painter, Matthew Maris. The veteran artist,
Josef Israels, was represented by such well-known
pictures as The Shipwrecked Mariner, The Cottage
Madonna, and other works. Of the lesser-known
Dutchmen, Bosboom, Mesdag, De Bock, Artz,
Neuhuys, and Weissenbruch were all to be seen in
the collection, which also contained examples by
Georges Michel, Decamps, Monticelli, Van Marcke,
Jules Breton, Boudin, Lepine, Harpignies, L’Her-
mitte, F. Ziem, and other French painters.

Not the least interesting feature of the collection
was the splendid series of water-colours, mostly of
the Dutch School, which included drawings by
Mauve, De Bock, Fritz Thoelen, Weissenbruch,
and some beautiful examples by the Frenchman,
Harpignies.

We are indebted to Messrs. Thos. Agnew & Sons
and Messrs. Wallis & Son for permission to
reproduce some of the works which will appear in
the forthcoming sale. Judging by the fine quality
of the pictures which are to be sold, it is antici-
pated that some will fetch very high prices. Those
who follow the records of the sale-rooms need
hardly be reminded of the astounding figures
reached in the Yerkes sale, recently held in New
York, when Corot’s Fisherman realized £i6,100 ;
the same artist’s Morning, ,£10,420; Troyon’s
Going to Market, £12,100; Millet’s Pig Killers,
£8,820; and Diaz’s Gathering Faggots, T6,020.

The first exhibition of the Society of Graver-
Printers in Colour was, as stated in the article on
the Society last month, to have opened on May 20,
at Messrs. Manzi, Joyant & Co.’s Galleries, Bed-
ford Street, but owing to the death of King
Edward the date was altered to June 16.

With reference to the notice and illustrations of
Sir George Frampton’s house in our April number,
it should be mentioned that Mr. E. Guy Dawber
was responsible for all the designs, excepting only
those of the mantelpieces.