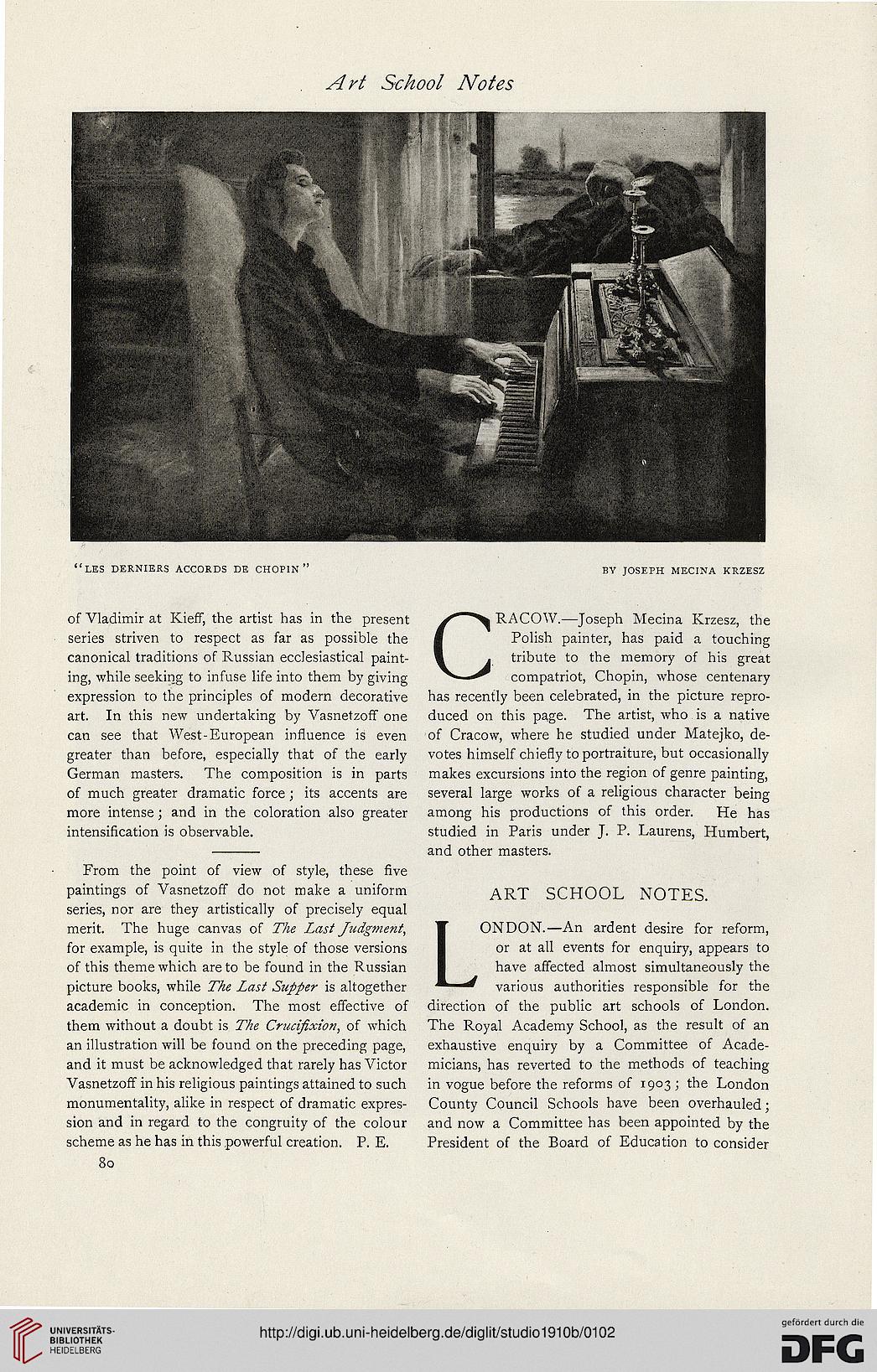 of Vladimir at Kieff, the artist has in the present
series striven to respect as far as possible the
canonical traditions of Russian ecclesiastical paint-
ing, while seeking to infuse life into them by giving
expression to the principles of modern decorative
art. In this new undertaking by Vasnetzoff one
can see that West-European influence is even
greater than before, especially that of the early
German masters. The composition is in parts
of much greater dramatic force; its accents are
more intense; and in the coloration also greater
intensification is observable.

From the point of view of style, these five
paintings of Vasnetzoff do not make a uniform
series, nor are they artistically of precisely equal
merit. The huge canvas of The Last Judgment,
for example, is quite in the style of those versions
of this theme which are to be found in the Russian
picture books, while The Last Supper is altogether
academic in conception. The most effective of
them without a doubt is The Crucifixion, of which
an illustration will be found on the preceding page,
and it must be acknowledged that rarely has Victor
Vasnetzoff in his religious paintings attained to such
monumentality, alike in respect of dramatic expres-
sion and in regard to the congruity of the colour
scheme as he has in this powerful creation. P. E.

CRACOW.—Joseph Mecina Krzesz, the
Polish painter, has paid a touching
tribute to the memory of his great
compatriot, Chopin, whose centenary
has recently been celebrated, in the picture repro-
duced on this page. The artist, who is a native
of Cracow, where he studied under Matejko, de-
votes himself chiefly to portraiture, but occasionally
makes excursions into the region of genre painting,
several large works of a religious character being
among his productions of this order. He has
studied in Paris under J. P. Laurens, Humbert,
and other masters.

LONDON.—An ardent desire for reform,
or at all events for enquiry, appears to
have affected almost simultaneously the
various authorities responsible for the
direction of the public art schools of London.
The Royal Academy School, as the result of an
exhaustive enquiry by a Committee of Acade-
micians, has reverted to the methods of teaching
in vogue before the reforms of 1903; the London
County Council Schools have been overhauled;
and now a Committee has been appointed by the
President of the Board of Education to consider