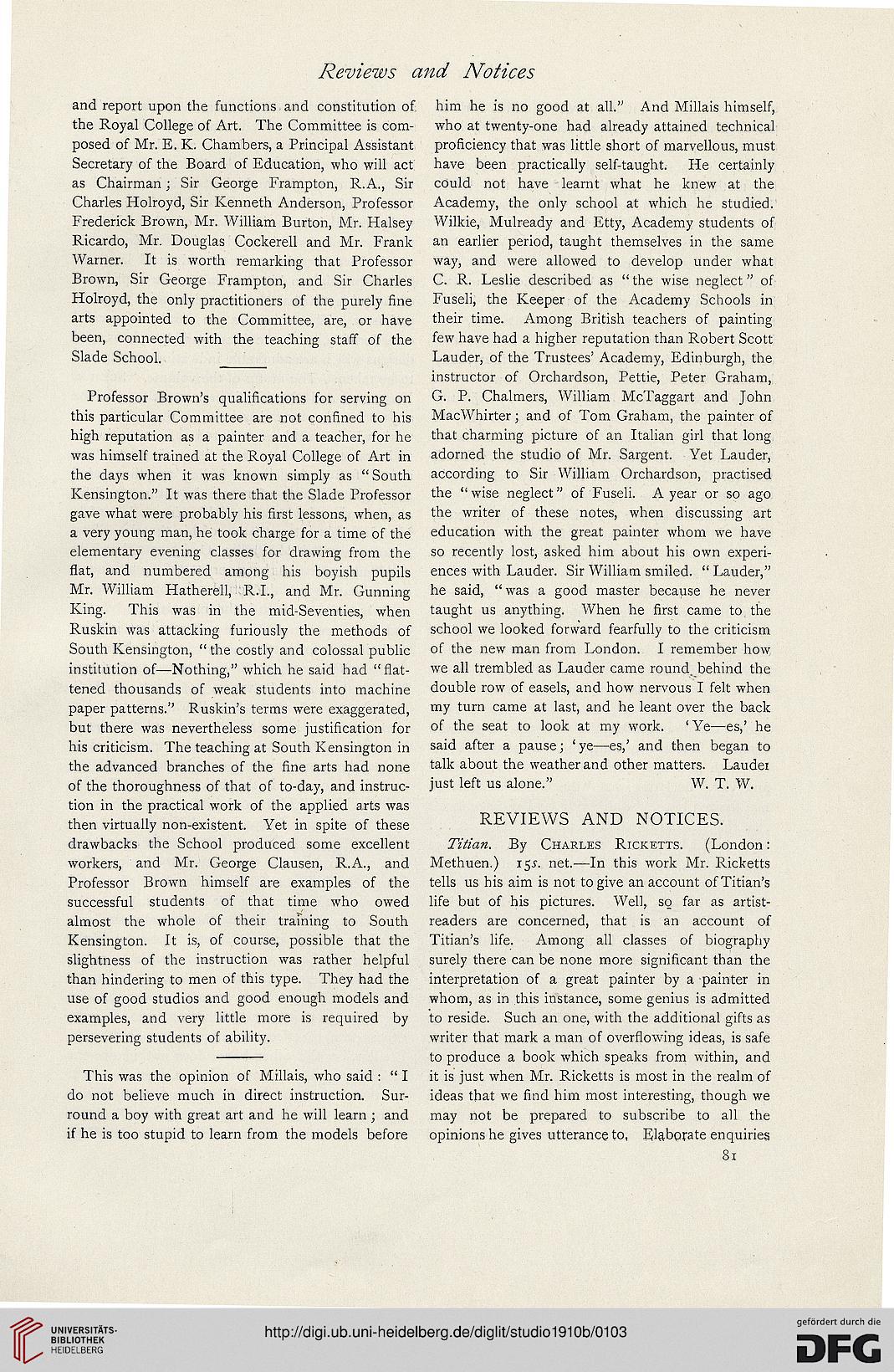 and report upon the functions and constitution of
the Royal College of Art. The Committee is com-
posed of Mr. E. K. Chambers, a Principal Assistant
Secretary of the Board of Education, who will act
as Chairman; Sir George Frampton, R.A., Sir
Charles Holroyd, Sir Kenneth Anderson, Professor
Frederick Brown, Mr. William Burton, Mr. Halsey
Ricardo, Mr. Douglas Cockerell and Mr. Frank
Warner. It is worth remarking that Professor
Brown, Sir George Frampton, and Sir Charles
Holroyd, the only practitioners of the purely fine
arts appointed to the Committee, are, or have
been, connected with the teaching staff of the
Slade School.

Professor Brown’s qualifications for serving on
this particular Committee are not confined to his
high reputation as a painter and a teacher, for he
was himself trained at the Royal College of Art in
the days when it was known simply as “ South
Kensington.” It was there that the Slade Professor
gave what were probably his first lessons, when, as
a very young man, he took charge for a time of the
elementary evening classes for drawing from the
flat, and numbered among his boyish pupils
Mr. William Hatherell, R.I., and Mr. Gunning
King. This was in the mid-Seventies, when
Ruskin was attacking furiously the methods of
South Kensington, “ the costly and colossal public
institution of—Nothing,” which he said had “flat-
tened thousands of weak students into machine
paper patterns.’’ Ruskin’s terms were exaggerated,
but there was nevertheless some justification for
his criticism. The teaching at South Kensington in
the advanced branches of the fine arts had none
of the thoroughness of that of to-day, and instruc-
tion in the practical work of the applied arts was
then virtually non-existent. Yet in spite of these
drawbacks the School produced some excellent
workers, and Mr. George Clausen, R.A., and
Professor Brown himself are examples of the
successful students of that time who owed
almost the whole of their training to South
Kensington. It is, of course, possible that the
slightness of the instruction was rather helpful
than hindering to men of this type. They had the
use of good studios and good enough models and
examples, and very little more is required by
persevering students of ability.

This was the opinion of Millais, who said : “ I
do not believe much in direct instruction. Sur-
round a boy with great art and he will learn ; and
if he is too stupid to learn from the models before

him he is no good at all.” And Millais himself,
who at twenty-one had already attained technical
proficiency that was little short of marvellous, must
have been practically self-taught. He certainly
could not have learnt what he knew at the
Academy, the only school at which he studied.
Wilkie, Mulready and Etty, Academy students of
an earlier period, taught themselves in the same
way, and were allowed to develop under what
C. R. Leslie described as “ the wise neglect ” of
Fuseli, the Keeper of the Academy Schools in
their time. Among British teachers of painting
few have had a higher reputation than Robert Scott
Lauder, of the Trustees’ Academy, Edinburgh, the
instructor of Orchardson, Pettie, Peter Graham,
G. P. Chalmers, William McTaggart and John
MacWhirter; and of Tom Graham, the painter of
that charming picture of an Italian girl that long
adorned the studio of Mr. Sargent. Yet Lauder,
according to Sir William Orchardson, practised
the “wise neglect” of Fuseli. A year or so ago
the writer of these notes, when discussing art
education with the great painter whom we have
so recently lost, asked him about his own experi-
ences with Lauder. Sir William smiled. “ Lauder,”
he said, “ was a good master because he never
taught us anything. When he first came to the
school we looked forward fearfully to the criticism
of the new man from London. I remember how
we all trembled as Lauder came round behind the
double row of easels, and how nervous I felt when
my turn came at last, and he leant over the back
of the seat to look at my work. ‘Ye—es,’ he
said after a pause; ‘ ye—es,’ and then began to
talk about the weather and other matters. Laudei
just left us alone.” W. T. W.

Titian. By Charles Ricketts. (London:
Methuen.) 15J. net.—In this work Mr. Ricketts
tells us his aim is not to give an account of Titian’s
life but of his pictures. Well, so far as artist-
readers are concerned, that is an account of
Titian’s life. Among all classes of biography
surely there can be none more significant than the
interpretation of a great painter by a painter in
whom, as in this instance, some genius is admitted
to reside. Such an one, with the additional gifts as
writer that mark a man of overflowing ideas, is safe
to produce a book which speaks from within, and
it is just when Mr. Ricketts is most in the realm of
ideas that we find him most interesting, though we
may not be prepared to subscribe to all the
opinions he gives utterance to. Elaborate enquiries