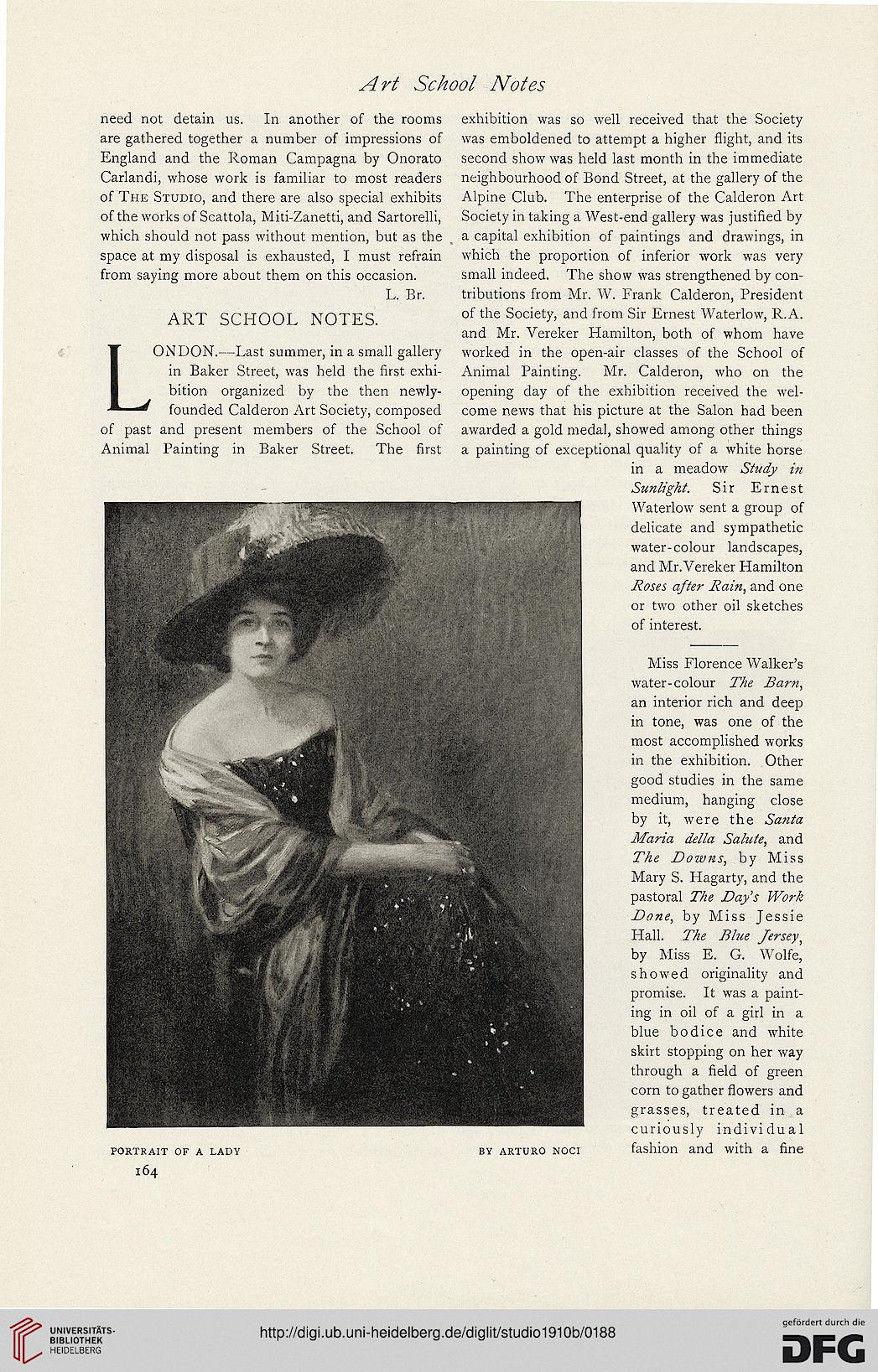 need not detain us. In another of the rooms
are gathered together a number of impressions of
England and the Roman Campagna by Onorato
Carlandi, whose work is familiar to most readers
of The Studio, and there are also special exhibits
of the works of Scattola, Miti-Zanetti, and Sartorelli,
which should not pass without mention, but as the
space at my disposal is exhausted, I must refrain
from saying more about them on this occasion.

LONDON.—Last summer, in a small gallery
in Baker Street, was held the first exhi-
bition organized by the then newly-
founded Calderon Art Society, composed
of past and present members of the School of
Animal Painting in Baker Street. The first

exhibition was so well received that the Society
was emboldened to attempt a higher flight, and its
second show was held last month in the immediate
neighbourhood of Bond Street, at the gallery of the
Alpine Club. The enterprise of the Calderon Art
Society in taking a West-end gallery was justified by
a capital exhibition of paintings and drawings, in
which the proportion of inferior work was very
small indeed. The show was strengthened by con-
tributions from Mr. W. Frank Calderon, President
of the Society, and from Sir Ernest Waterlow, R.A.
and Mr. Vereker Hamilton, both of whom have
worked in the open-air classes of the School of
Animal Painting. Mr. Calderon, who on the
opening day of the exhibition received the wel-
come news that his picture at the Salon had been
awarded a gold medal, showed among other things
a painting of exceptional quality of a white horse
in a meadow Study iti
Sunlight. Sir Ernest
Waterlow sent a group of
delicate and sympathetic
water-colour landscapes,
and Mr.Vereker Hamilton
Roses after Rain, and one
or two other oil sketches
of interest.

Miss Florence Walker’s
water-colour The Barn,
an interior rich and deep
in tone, was one of the
most accomplished works
in the exhibition. Other
good studies in the same
medium, hanging close
by it, were the Santa
Maria della Salute, and
The Downs, by Miss
Mary S. Hagarty, and the
pastoral The Day’s Work
Done, by Miss Jessie
Hall. The Blue Jersey,
by Miss E. G. Wolfe,
showed originality and
promise. It was a paint-
ing in oil of a girl in a
blue bodice and white
skirt stopping on her way
through a field of green
corn to gather flowers and
grasses, treated in a
curiously individual
fashion and with a fine