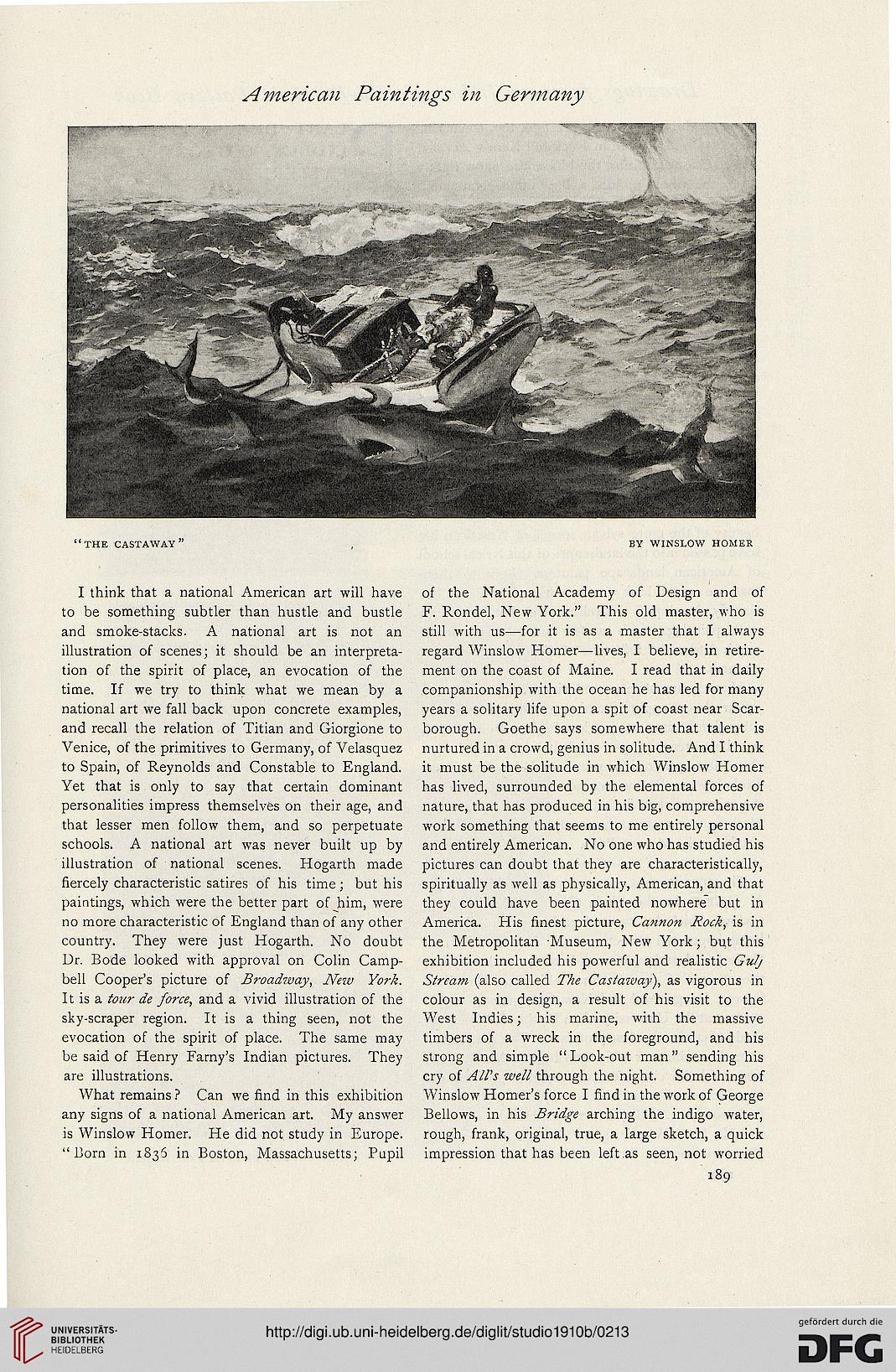 I think that a national American art will have
to be something subtler than hustle and bustle
and smoke-stacks. A national art is not an
illustration of scenes; it should be an interpreta-
tion of the spirit of place, an evocation of the
time. If we try to think what we mean by a
national art we fall back upon concrete examples,
and recall the relation of Titian and Giorgione to
Venice, of the primitives to Germany, of Velasquez
to Spain, of Reynolds and Constable to England.
Yet that is only to say that certain dominant
personalities impress themselves on their age, and
that lesser men follow them, and so perpetuate
schools. A national art was never built up by
illustration of national scenes. Hogarth made
fiercely characteristic satires of his time; but his
paintings, which were the better part of him, were
no more characteristic of England than of any other
country. They were just Hogarth. No doubt
Dr. Bode looked with approval on Colin Camp-
bell Cooper’s picture of Broadway, New York.
It is a tour de force, and a vivid illustration of the
sky-scraper region. It is a thing seen, not the
evocation of the spirit of place. The same may
be said of Henry Farny’s Indian pictures. They
are illustrations.

What remains ? Can we find in this exhibition
any signs of a national American art. My answer
is Winslow Homer. He did not study in Europe.
“Born in 1836 in Boston, Massachusetts; Pupil

of the National Academy of Design and of
F. Rondel, New York.” This old master, who is
still with us—for it is as a master that I always
regard Winslow Homer—lives, I believe, in retire-
ment on the coast of Maine. I read that in daily
companionship with the ocean he has led for many
years a solitary life upon a spit of coast near Scar-
borough. Goethe says somewhere that talent is
nurtured in a crowd, genius in solitude. And I think
it must be the solitude in which Winslow Homer
has lived, surrounded by the elemental forces of
nature, that has produced in his big, comprehensive
work something that seems to me entirely personal
and entirely American. No one who has studied his
pictures can doubt that they are characteristically,
spiritually as well as physically, American, and that
they could have been painted nowhere but in
America. His finest picture, Cannon Rock, is in
the Metropolitan Museum, New York; but this
exhibition included his powerful and realistic Gulj
Stream (also called The Castaway), as vigorous in
colour as in design, a result of his visit to the
West Indies; his marine, with the massive
timbers of a wreck in the foreground, and his
strong and simple “Look-out man” sending his
cry of All's well through the night. Something of
Winslow Homer’s force I find in the work of George
Bellows, in his Bridge arching the indigo water,
rough, frank, original, true, a large sketch, a quick
impression that has been left as seen, not worried