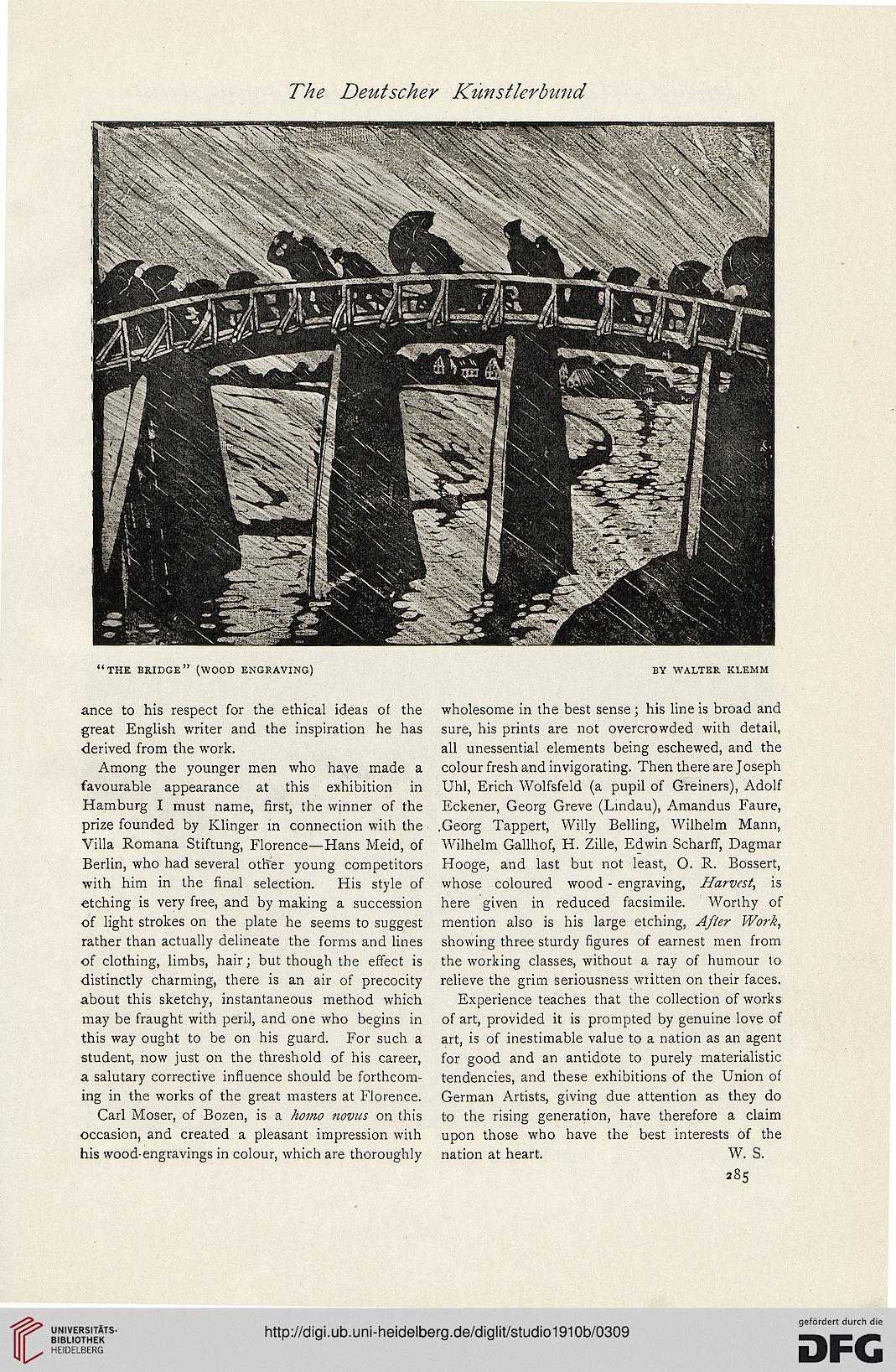 ance to his respect for the ethical ideas of the
great English writer and the inspiration he has
derived from the work.

Among the younger men who have made a
favourable appearance at this exhibition in
Hamburg I must name, first, the winner of the
prize founded by Klinger in connection with the
Villa Romana Stiftung, Florence—Hans Meid, of
Berlin, who had several other young competitors
with him in the final selection. His style of
etching is very free, and by making a succession
of light strokes on the plate he seems to suggest
rather than actually delineate the forms and lines
of clothing, limbs, hair; but though the effect is
distinctly charming, there is an air of precocity
about this sketchy, instantaneous method which
may be fraught with peril, and one who begins in
this way ought to be on his guard. For such a
student, now just on the threshold of his career,
a salutary corrective influence should be forthcom-
ing in the works of the great masters at Florence.

Carl Moser, of Bozen, is a homo novus on this
occasion, and created a pleasant impression with
his wood-engravings in colour, which are thoroughly

wholesome in the best sense; his line is broad and
sure, his prints are not overcrowded with detail,
all unessential elements being eschewed, and the
colour fresh and invigorating. Then there are Joseph
Uhl, Erich Wolfsfeld (a pupil of Greiners), Adolf
Eckener, Georg Greve (Lindau), Amandus Faure,
.Georg Tappert, Willy Belling, Wilhelm Mann,
Wilhelm Gallhof, H. Zille, Edwin Scharff, Dagmar
Hooge, and last but not least, O. R. Bossert,
whose coloured wood - engraving, Harvest, is
here given in reduced facsimile. Worthy of
mention also is his large etching, After Work,
showing three sturdy figures of earnest men from
the working classes, without a ray of humour to
relieve the grim seriousness written on their faces.

Experience teaches that the collection of works
of art, provided it is prompted by genuine love of
art, is of inestimable value to a nation as an agent
for good and an antidote to purely materialistic
tendencies, and these exhibitions of the Union of
German Artists, giving due attention as they do
to the rising generation, have therefore a claim
upon those who have the best interests of the
nation at heart. W. S.