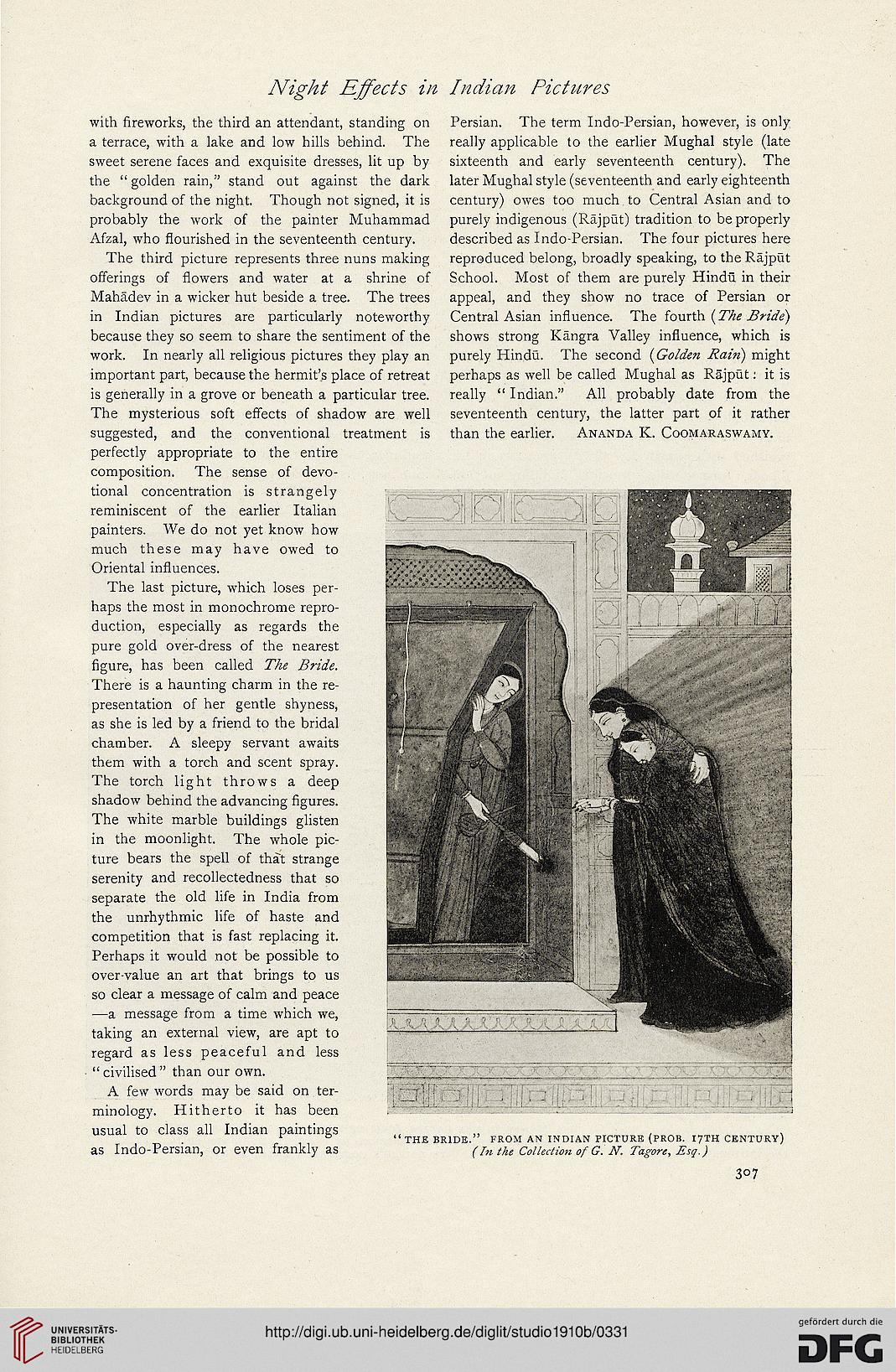 with fireworks, the third an attendant, standing on
a terrace, with a lake and low hills behind. The
sweet serene faces and exquisite dresses, lit up by
the “golden rain,” stand out against the dark
background of the night. Though not signed, it is
probably the work of the painter Muhammad
Afzal, who flourished in the seventeenth century.

The third picture represents three nuns making
offerings of flowers and water at a shrine of
Mahadev in a wicker hut beside a tree. The trees
in Indian pictures are particularly noteworthy
because they so seem to share the sentiment of the
work. In nearly all religious pictures they play an
important part, because the hermit’s place of retreat
is generally in a grove or beneath a particular tree.
The mysterious soft effects of shadow are well
suggested, and the conventional treatment is
perfectly appropriate to the entire
composition. The sense of devo-
tional concentration is strangely
reminiscent of the earlier Italian
painters. We do not yet know how
much these may have owed to
Oriental influences.

The last picture, which loses per-
haps the most in monochrome repro-
duction, especially as regards the
pure gold over-dress of the nearest
figure, has been called The Bride.

There is a haunting charm in the re-
presentation of her gentle shyness,
as she is led by a friend to the bridal
chamber. A sleepy servant awaits
them with a torch and scent spray.

The torch light throws a deep
shadow behind the advancing figures.

The white marble buildings glisten
in the moonlight. The whole pic-
ture bears the spell of that strange
serenity and recollectedness that so
separate the old life in India from
the unrhythmic life of haste and
competition that is fast replacing it.

Perhaps it would not be possible to
over-value an art that brings to us
so clear a message of calm and peace
—a message from a time which we,
taking an external view, are apt to
regard as less peaceful and less
“civilised” than our own.

A few words may be said on ter-
minology. Hitherto it has been
usual to class all Indian paintings
as Indo-Persian, or even frankly as

Persian. The term Indo-Persian, however, is only
really applicable to the earlier Mughal style (late
sixteenth and early seventeenth century). The
later Mughal style (seventeenth and early eighteenth
century) owes too much to Central Asian and to
purely indigenous (Rajput) tradition to be properly
described as Indo-Persian. The four pictures here
reproduced belong, broadly speaking, to the Rajput
School. Most of them are purely Hindu in their
appeal, and they show no trace of Persian or
Central Asian influence. The fourth (The Bride')
shows strong Kangra Valley influence, which is
purely Hindu. The second (Golden Rain) might
perhaps as well be called Mughal as Rajput: it is
really “ Indian.” All probably date from the
seventeenth century, the latter part of it rather
than the earlier. Ananda K. Coomaraswamy.