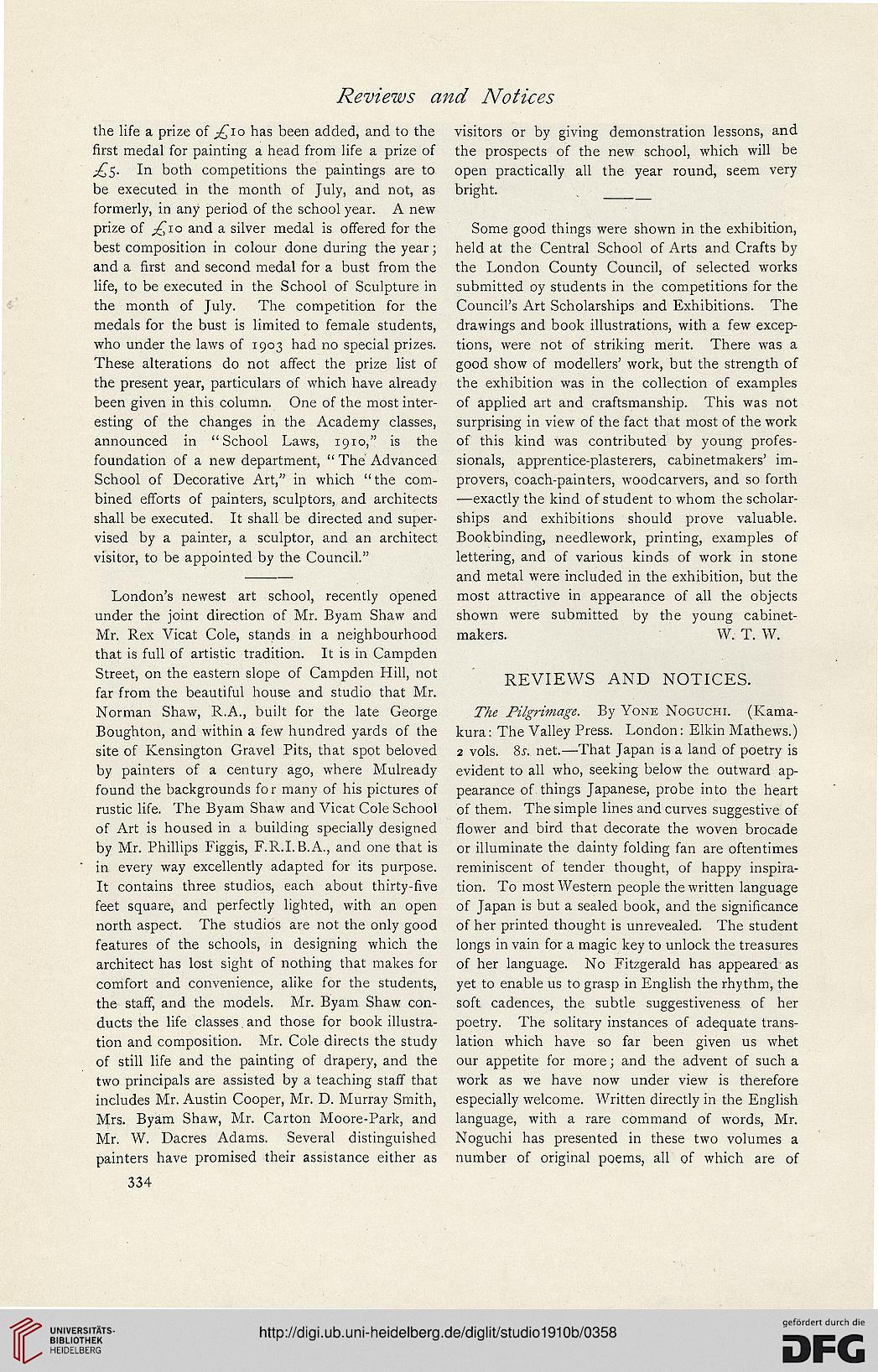 the life a prize of ^io has been added, and to the
first medal for painting a head from life a prize of
In both competitions the paintings are to
be executed in the month of July, and not, as
formerly, in any period of the school year. A new
prize of ;£io and a silver medal is offered for the
best composition in colour done during the year;
and a first and second medal for a bust from the
life, to be executed in the School of Sculpture in
the month of July. The competition for the
medals for the bust is limited to female students,
who under the laws of 1903 had no special prizes.
These alterations do not affect the prize list of
the present year, particulars of which have already
been given in this column. One of the most inter-
esting of the changes in the Academy classes,
announced in “School Laws, 1910,” is the
foundation of a new department, “ The Advanced
School of Decorative Art,” in which “ the com-
bined efforts of painters, sculptors, and architects
shall be executed. It shall be directed and super-
vised by a painter, a sculptor, and an architect
visitor, to be appointed by the Council.”

London’s newest art school, recently opened
under the joint direction of Mr. Byam Shaw and
Mr. Rex Vicat Cole, stands in a neighbourhood
that is full of artistic tradition. It is in Campden
Street, on the eastern slope of Campden Hill, not
far from the beautiful house and studio that Mr.
Norman Shaw, R.A., built for the late George
Boughton, and within a few hundred yards of the
site of Kensington Gravel Pits, that spot beloved
by painters of a century ago, where Mulready
found the backgrounds for many of his pictures of
rustic life. The Byam Shaw and Vicat Cole School
of Art is housed in a building specially designed
by Mr. Phillips Figgis, F.R.I.B.A., and one that is
in every way excellently adapted for its purpose.
It contains three studios, each about thirty-five
feet square, and perfectly lighted, with an open
north aspect. The studios are not the only good
features of the schools, in designing which the
architect has lost sight of nothing that makes for
comfort and convenience, alike for the students,
the staff, and the models. Mr. Byam Shaw con-
ducts the life classes and those for book illustra-
tion and composition. Mr. Cole directs the study
of still life and the painting of drapery, and the
two principals are assisted by a teaching staff that
includes Mr. Austin Cooper, Mr. D. Murray Smith,
Mrs. Byam Shaw, Mr. Carton Moore-Park, and
Mr. W. Dacres Adams. Several distinguished
painters have promised their assistance either as

visitors or by giving demonstration lessons, and
the prospects of the new school, which will be
open practically all the year round, seem very
bright.

Some good things were shown in the exhibition,
held at the Central School of Arts and Crafts by
the London County Council, of selected works
submitted oy students in the competitions for the
Council’s Art Scholarships and Exhibitions. The
drawings and book illustrations, with a few excep-
tions, were not of striking merit. There was a
good show of modellers’ work, but the strength of
the exhibition was in the collection of examples
of applied art and craftsmanship. This was not
surprising in view of the fact that most of the work
of this kind was contributed by young profes-
sionals, apprentice-plasterers, cabinetmakers’ im-
provers, coach-painters, woodcarvers, and so forth
—exactly the kind of student to whom the scholar-
ships and exhibitions should prove valuable.
Bookbinding, needlework, printing, examples of
lettering, and of various kinds of work in stone
and metal were included in the exhibition, but the
most attractive in appearance of all the objects
shown were submitted by the young cabinet-
makers. W. T. W.

The Pilgrimage. By Yone Noguchi. (Kama-
kura : The Valley Press. London: Elkin Mathews.)
2 vols. 8.r. net.—That Japan is a land of poetry is
evident to all who, seeking below the outward ap-
pearance of things Japanese, probe into the heart
of them. The simple lines and curves suggestive of
flower and bird that decorate the woven brocade
or illuminate the dainty folding fan are oftentimes
reminiscent of tender thought, of happy inspira-
tion. To most Western people the written language
of Japan is but a sealed book, and the significance
of her printed thought is unrevealed. The student
longs in vain for a magic key to unlock the treasures
of her language. No Fitzgerald has appeared as
yet to enable us to grasp in English the rhythm, the
soft cadences, the subtle suggestiveness of her
poetry. The solitary instances of adequate trans-
lation which have so far been given us whet
our appetite for more; and the advent of such a
work as we have now under view is therefore
especially welcome. Written directly in the English
language, with a rare command of words, Mr.
Noguchi has presented in these two volumes a
number of original poems, all of which are of