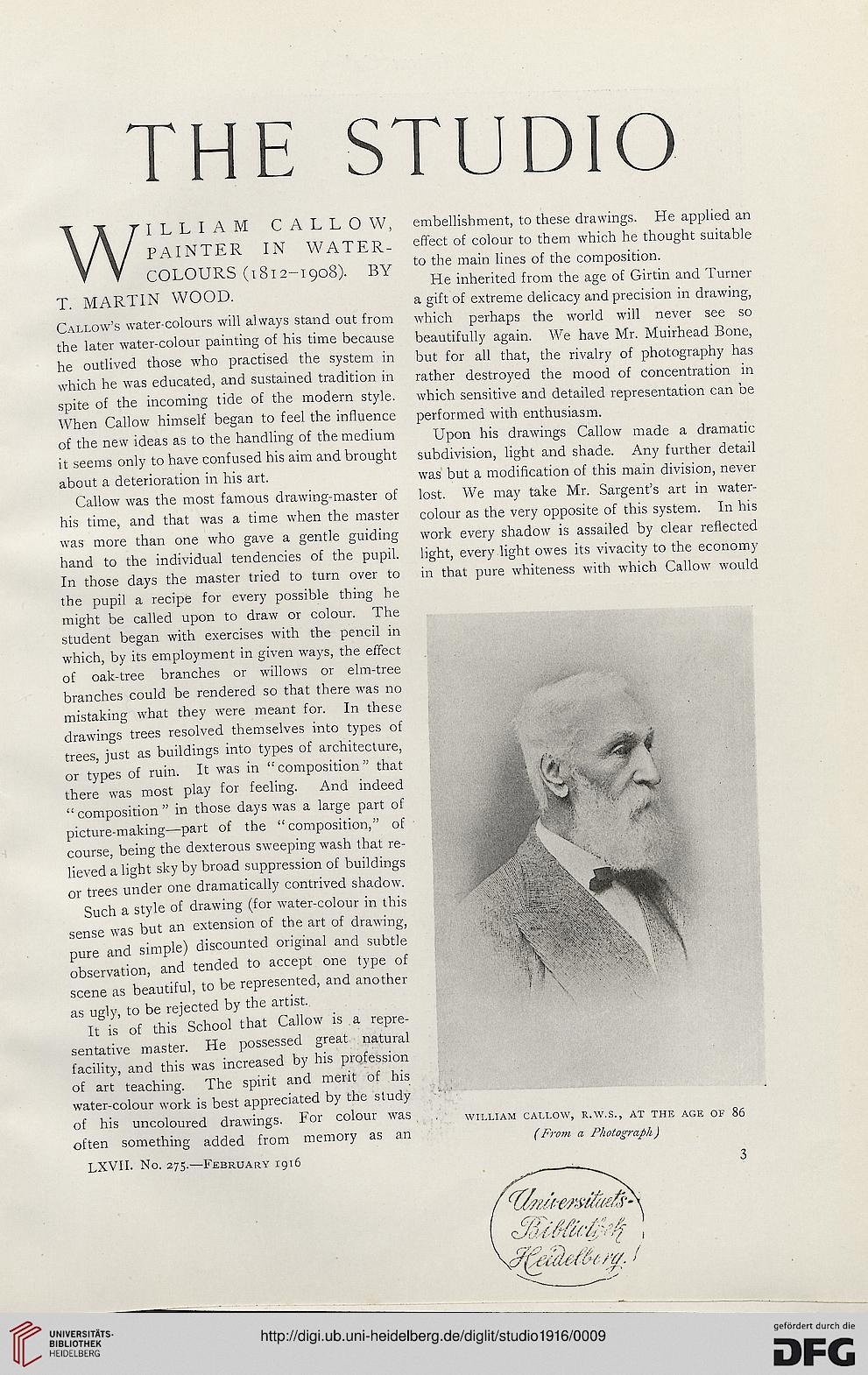 Callow’s water-colours will always stand out from
the later water-colour painting of his time because
he outlived those who practised the system in
which he was educated, and sustained tradition in
spite of the incoming tide of the modern style.
When Callow himself began to feel the influence
of the new ideas as to the handling of the medium
it seems only to have confused his aim and brought
about a deterioration in his art.

Callow was the most famous drawing-master of
his time, and that was a time when the master
was more than one who gave a gentle guiding
hand to the individual tendencies of the pupil.
In those days the master tried to turn over to
the pupil a recipe for every possible thing he
might be called upon to draw or colour. The
student began with exercises with the pencil in
which, by its employment in given ways, the effect
of oak-tree branches or willows or elm-tree
branches could be rendered so that there was no
mistaking what they were meant for. In these
drawings trees resolved themselves into types of
trees, just as buildings into types of architecture,
or types of ruin. It was in “composition” that
there was most play for feeling. And indeed
“composition” in those days was a large part of
picture-making—part of the “composition,” of
course, being the dexterous sweeping wash that re-
lieved a light sky by broad suppression of buildings
or trees under one dramatically contrived shadow.

Such a style of drawing (for water-colour in this
sense was but an extension of the art of drawing,
pure and simple) discounted original and subtle
observation, and tended to accept one type of
scene as beautiful, to be represented, and another
as ugly, to be rejected by the artist.

It is of this School that Callow is a repre-
sentative master. He possessed great natural
facility, and this was increased by his profession
of art teaching. The spirit and merit of his
water-colour work is best appreciated by the study
of his uncoloured drawings. For colour was
often something added from memory as an
LXVII. No. 275.—February 1916

embellishment, to these drawings. He applied an
effect of colour to them which he thought suitable
to the main lines of the composition.

He inherited from the age of Girtin and Turner
a gift of extreme delicacy and precision in drawing,
which perhaps the world will never see so
beautifully again. We have Mr. Muirhead Bone,
but for all that, the rivalry of photography has
rather destroyed the mood of concentration in
which sensitive and detailed representation can be
performed with enthusiasm.

Upon his drawings Callow made a dramatic
subdivision, light and shade. Any further detail
was but a modification of this main division, never
lost. We may take Mr. Sargent’s art in water-
colour as the very opposite of this system. In his
work every shadow is assailed by clear reflected
light, every light owes its vivacity to the economy
in that pure whiteness with which Callow would