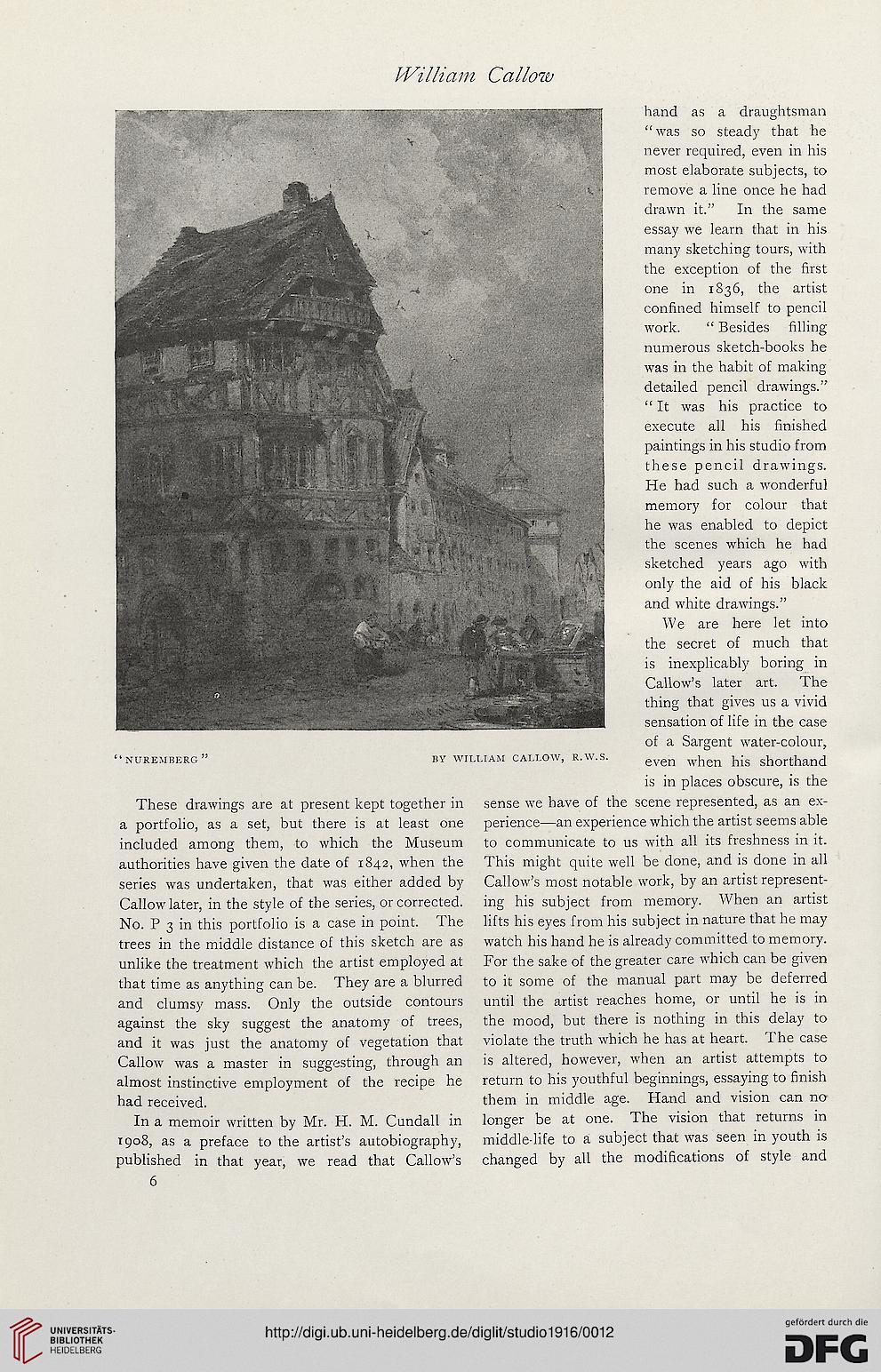 These drawings are at present kept together in
a portfolio, as a set, but there is at least one
included among them, to which the Museum
authorities have given the date of 1842, when the
series was undertaken, that was either added by
Callow later, in the style of the series, or corrected.
No. P 3 in this portfolio is a case in point. The
trees in the middle distance of this sketch are as
unlike the treatment which the artist employed at
that time as anything can be. They are a blurred
and clumsy mass. Only the outside contours
against the sky suggest the anatomy of trees,
and it was just the anatomy of vegetation that
Callow was a master in suggesting, through an
almost instinctive employment of the recipe he
had received.

In a memoir written by Mr. H. M. Cundall in
1908, as a preface to the artist’s autobiography,
published in that year, we read that Callow’s
6

hand as a draughtsman
“was so steady that he
never required, even in his
most elaborate subjects, to
remove a line once he had
drawn it.” In the same
essay we learn that in his
many sketching tours, with
the exception of the first
one in 1836, the artist
confined himself to pencil
work. “ Besides filling
numerous sketch-books he
was in the habit of making
detailed pencil drawings.”
“ It was his practice to
execute all his finished
paintings in his studio from
these pencil drawings.
He had such a wonderful
memory for colour that
he was enabled to depict
the scenes which he had
sketched years ago with
only the aid of his black
and white drawings.”

We are here let into
the secret of much that
is inexplicably boring in
Callow’s later art. The
thing that gives us a vivid
sensation of life in the case
of a Sargent water-colour,
even when his shorthand
is in places obscure, is the
sense we have of the scene represented, as an ex-
perience—an experience which the artist seems able
to communicate to us with all its freshness in it.
This might quite well be done, and is done in all
Callow’s most notable work, by an artist represent-
ing his subject from memory. When an artist
lifts his eyes from his subject in nature that he may
watch his hand he is already committed to memory.
For the sake of the greater care which can be given
to it some of the manual part may be deferred
until the artist reaches home, or until he is in
the mood, but there is nothing in this delay to
violate the truth which he has at heart. The case
is altered, however, when an artist attempts to
return to his youthful beginnings, essaying to finish
them in middle age. Hand and vision can no
longer be at one. The vision that returns in
middle-life to a subject that was seen in youth is
changed by all the modifications of style and