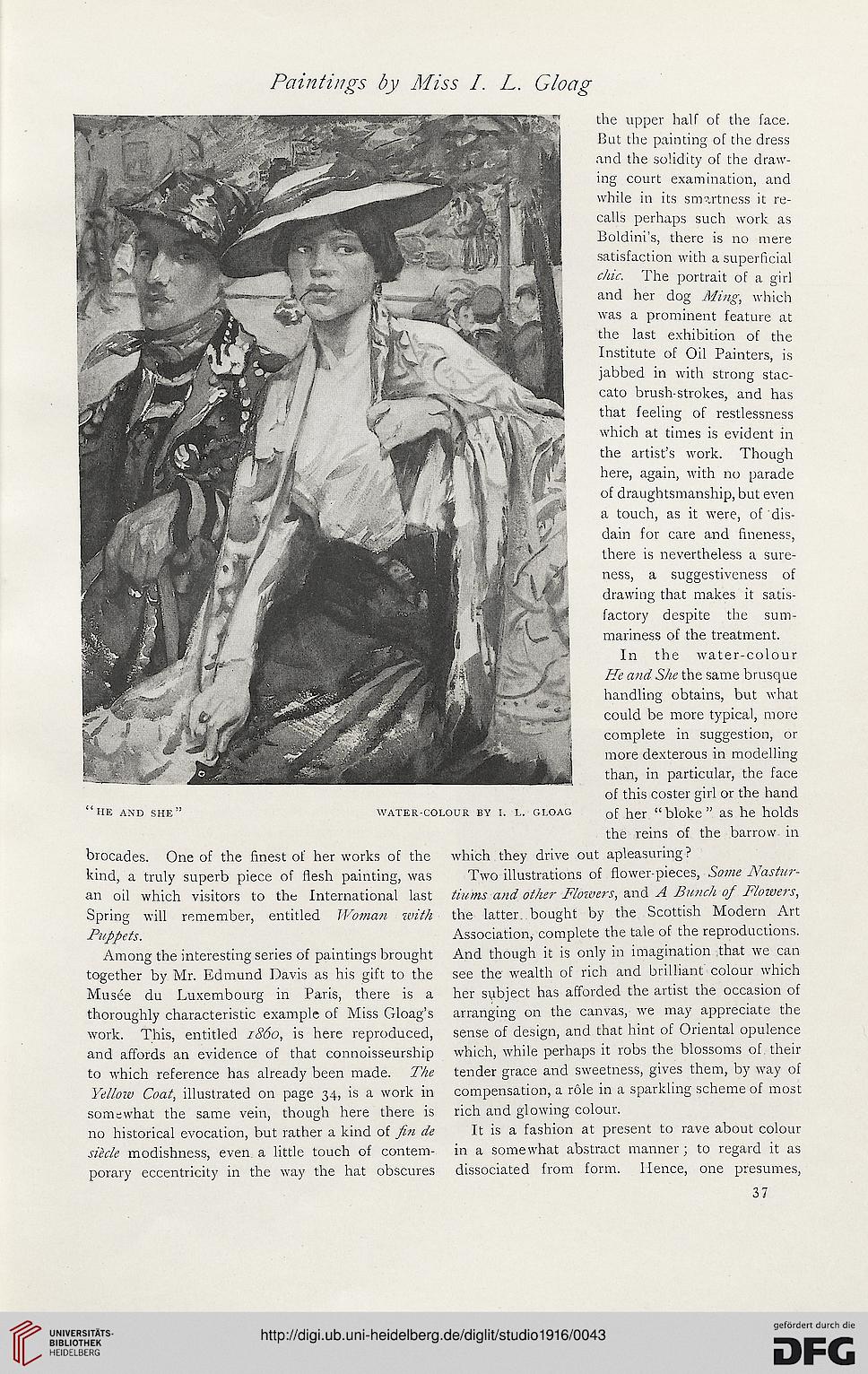 brocades. One of the finest of her works of the
kind, a truly superb piece of flesh painting, was
an oil which visitors to the International last
Spring will remember, entitled Woman with
Puppets.

Among the interesting series of paintings brought
together by Mr. Edmund Davis as his gift to the
Musee du Luxembourg in Paris, there is a
thoroughly characteristic example of Miss Gloag’s
work. This, entitled i860, is here reproduced,
and affords an evidence of that connoisseurship
to which reference has already been made. The
Yellow Coat, illustrated on page 34, is a work in
somewhat the same vein, though here there is
no historical evocation, but rather a kind of fin de
siecle modishness, even a little touch of contem-
porary eccentricity in the way the hat obscures

the upper half of the face.
But the painting of the dress
and the solidity of the draw-
ing court examination, and
while in its smartness it re-
calls perhaps such work as
Boldini’s, there is no mere
satisfaction with a superficial
chic. The portrait of a girl
and her dog Ming, which
was a prominent feature at
the last exhibition of the
Institute of Oil Painters, is
jabbed in with strong stac-
cato brush-strokes, and has
that feeling of restlessness
which at times is evident in
the artist’s work. Though

here, again, with no parade
of draughtsmanship, but even
a touch, as it were, of dis-
dain for care and fineness,
there is nevertheless a sure-
ness, a suggestiveness of
drawing that makes it satis-
factory despite the sum-
mariness of the treatment.

In the water-colour
He and She the same brusque
handling obtains, but what
could be more typical, more
complete in suggestion, or
more dexterous in modelling
than, in particular, the face
of this coster girl or the hand
of her “ bloke ” as he holds
the reins of the barrow in
which they drive out apleasuring ?

Two illustrations of flower-pieces, Some Nastur-
tiums and other Flowers, and A Bunch of Flowers,
the latter bought by the Scottish Modern Art
Association, complete the tale of the reproductions.
And though it is only in imagination that we can
see the wealth of rich and brilliant colour which
her subject has afforded the artist the occasion of
arranging on the canvas, we may appreciate the
sense of design, and that hint of Oriental opulence
which, while perhaps it robs the blossoms of their
tender grace and sweetness, gives them, by way of
compensation, a role in a sparkling scheme of most
rich and glowing colour.

It is a fashion at present to rave about colour
in a somewhat abstract manner; to regard it as
dissociated from form, lienee, one presumes,

WATER-COLOUR BY I. L. GLOAG