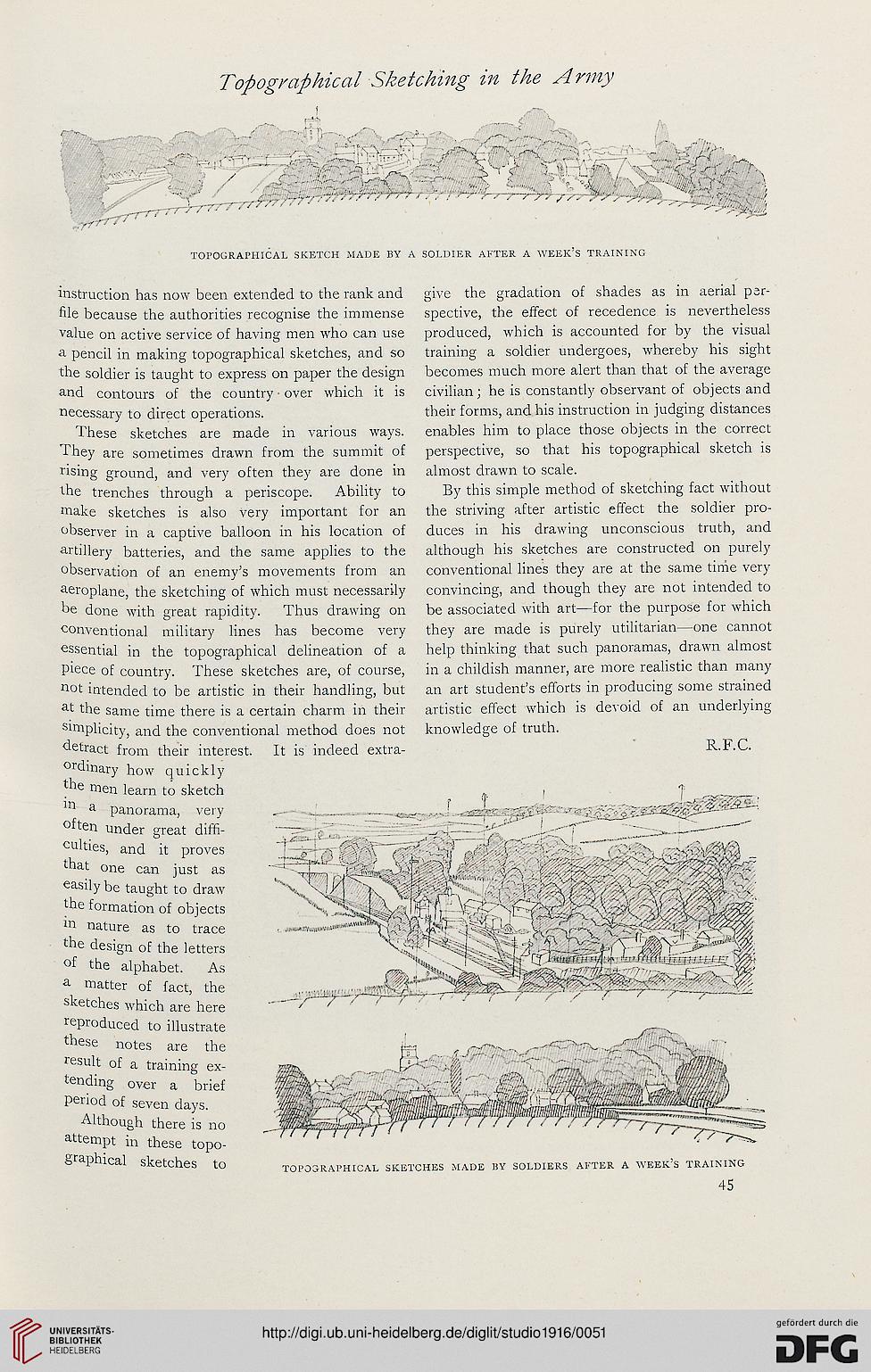 instruction has now been extended to the rank and
file because the authorities recognise the immense
value on active service of having men who can use
a pencil in making topographical sketches, and so
the soldier is taught to express on paper the design
and contours of the country ■ over which it is
necessary to direct operations.

These sketches are made in various ways.
They are sometimes drawn from the summit of
rising ground, and very often they are done in
the trenches through a periscope. Ability to
nrake sketches is also very important for an
observer in a captive balloon in his location of
artillery batteries, and the same applies to the
observation of an enemy’s movements from an
aeroplane, the sketching of which must necessarily
be done with great rapidity. Thus drawing on
conventional military lines has become very
essential in the topographical delineation of a
Piece of country. These sketches are, of course,
n°t intended to be artistic in their handling, but
at the same time there is a certain charm in their
simplicity, and the conventional method does not
detract from their interest. It is indeed extra-

give the gradation of shades as in aerial per-
spective, the effect of recedence is nevertheless
produced, which is accounted for by the visual
training a soldier undergoes, whereby his sight
becomes much more alert than that of the average
civilian; he is constantly observant of objects and
their forms, and his instruction in judging distances
enables him to place those objects in the correct
perspective, so that his topographical sketch is
almost drawn to scale.

By this simple method of sketching fact without
the striving after artistic effect the soldier pro-
duces in his drawing unconscious truth, and
although his sketches are constructed on purely
conventional lines they are at the same time very
convincing, and though they are not intended to
be associated with art—for the purpose for which
they are made is purely utilitarian—one cannot
help thinking that such panoramas, drawn almost
in a childish manner, are more realistic than many
an art student’s efforts in producing some strained
artistic effect which is devoid of an underlying
knowledge of truth.

ordinary how quickly
the men learn to sketch
ln a panorama, very
often under great diffi-
culties, and it proves
that one can just as
easily be taught to draw
the formation of objects
in nature as to trace
the design of the letters
of the alphabet. As
a matter of fact, the
sketches which are here
reproduced to illustrate
these notes are the
result of a training ex-
tending over a brief
period of seven days.

Although there is no
attempt in these topo-
graphical sketches to

TOPOGRAPHICAL SKETCHES MADE BY SOLDIERS AFTER A WEEK’S TRAINING