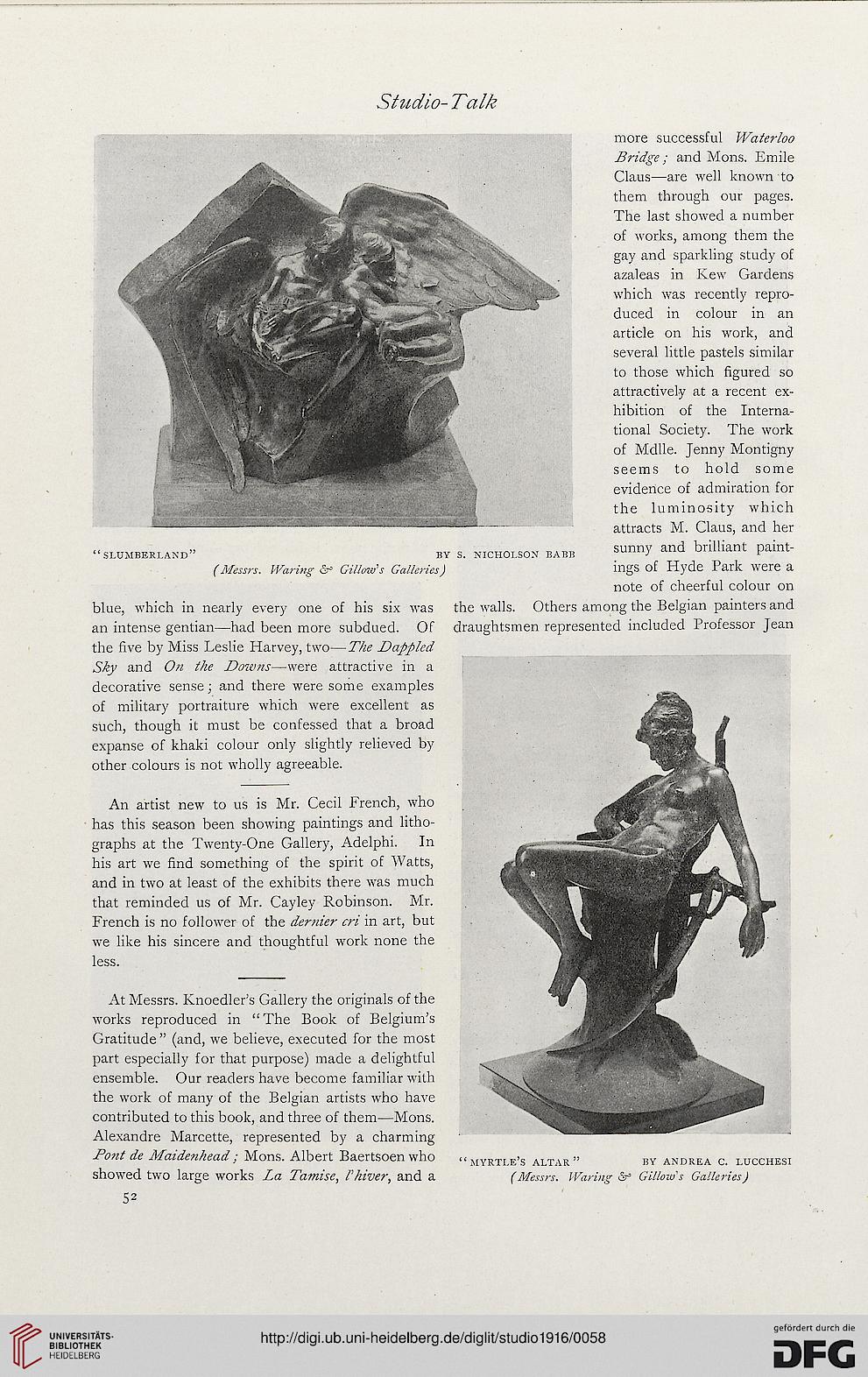 blue, which in nearly every one of his six was
an intense gentian—had been more subdued. Of
the five by Miss Leslie Harvey, two—The Dappled
Sky and On the Downs—were attractive in a
decorative sense; and there were some examples
of military portraiture which were excellent as
such, though it must be confessed that a broad
expanse of khaki colour only slightly relieved by
other colours is not wholly agreeable.

more successful Waterloo
Bridge; and Mons. Emile
Claus—are well known to
them through our pages.
The last showed a number
of works, among them the
gay and sparkling study of
azaleas in Kew Gardens
which was recently repro-
duced in colour in an
article on his work, and
several little pastels similar
to those which figured so
attractively at a recent ex-
hibition of the Interna-
tional Society. The work
of Mdlle. Jenny Montigny
seems to hold some
evidence of admiration for
the luminosity which
attracts M. Claus, and her
sunny and brilliant paint-
ings of Hyde Park were a
note of cheerful colour on
the walls. Others among the Belgian painters and
draughtsmen represented included Professor Jean

An artist new to us is Mr. Cecil French, who
has this season been showing paintings and litho-
graphs at the Twenty-One Gallery, Adelphi. In
his art we find something of the spirit of Watts,
and in two at least of the exhibits there was much
that reminded us of Mr. Cayley Robinson. Mr.
French is no follower of the dernier cri in art, but
we like his sincere and thoughtful work none the
less.

At Messrs. Knoedler’s Gallery the originals of the
works reproduced in “The Book of Belgium’s
Gratitude ” (and, we believe, executed for the most
part especially for that purpose) made a delightful
ensemble. Our readers have become familiar with
the work of many of the Belgian artists who have
contributed to this book, and three of them—Mons.
Alexandre Marcette, represented by a charming
Pont de Maidenhead ; Mons. Albert Baertsoen who
showed two large works La Tamise, I’hiver, and a
52