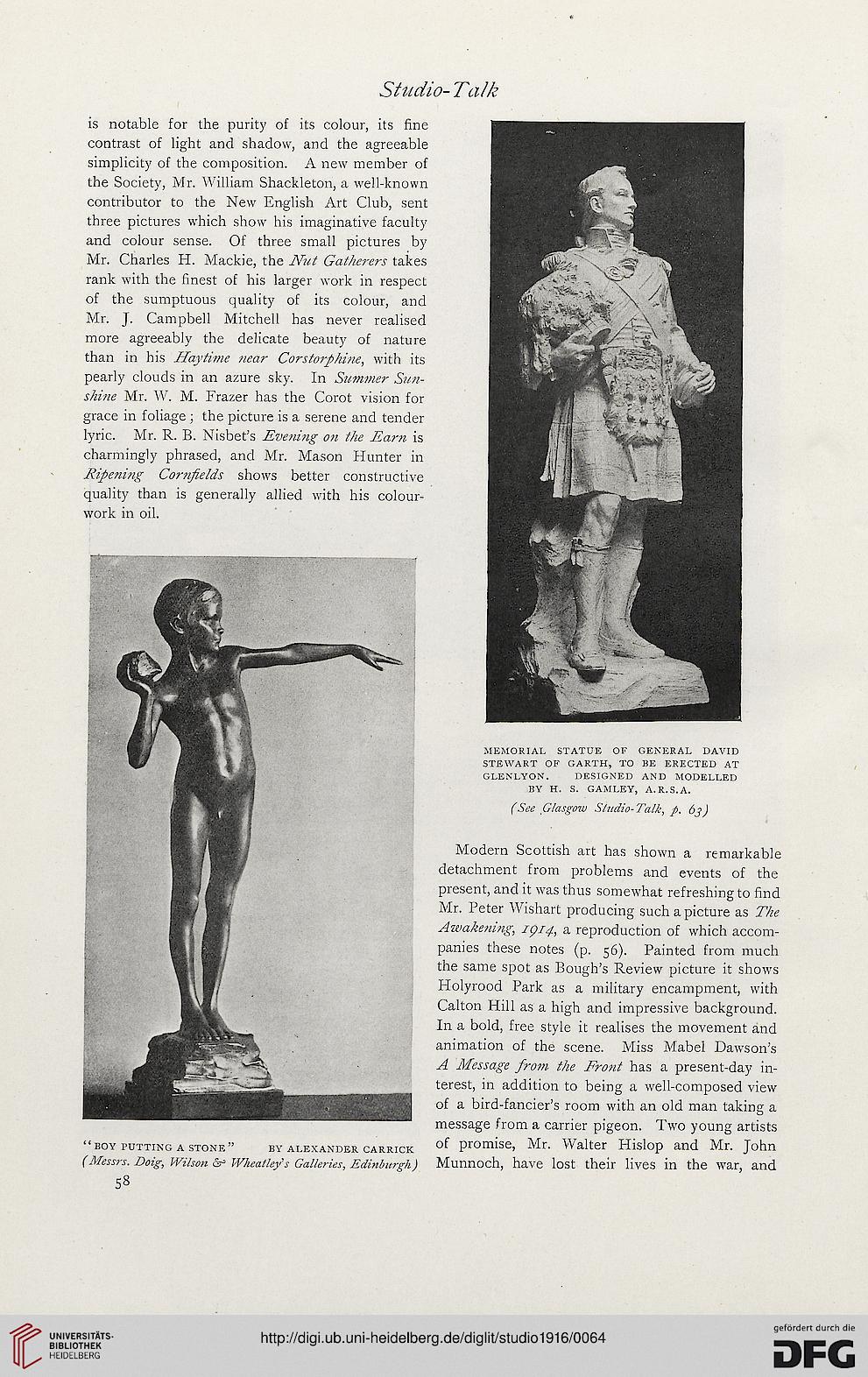 is notable for the purity of its colour, its fine
contrast of light and shadow, and the agreeable
simplicity of the composition. A new member of
the Society, Mr. William Shackleton, a well-known
contributor to the New English Art Club, sent
three pictures which show his imaginative faculty
and colour sense. Of three small pictures by
Mr. Charles H. Mackie, the Nut Gatherers takes
rank with the finest of his larger work in respect
of the sumptuous quality of its colour, and
Mr. J. Campbell Mitchell has never realised
more agreeably the delicate beauty of nature
than in his Haytime near Corstorphitie, with its
pearly clouds in an azure sky. In Summer Sun-
shine Mr. W. M. Frazer has the Corot vision for
grace in foliage ; the picture is a serene and tender
lyric. Mr. R. B. Nisbet’s Evening on the Earn is
charmingly phrased, and Mr. Mason Hunter in
Ripening Cornfields shows better constructive
quality than is generally allied with his colour-
work in oil.

MEMORIAL STATUE OF GENERAL DAVID
STEWART OF GARTH, TO BE ERECTED AT
GLENLYON. DESIGNED AND MODELLED
BY H. S. GAMLEY, A.R.S.A.

Modern Scottish art has shown a remarkable
detachment from problems and events of the
present, and it was thus somewhat refreshing to find
Mr. Peter Wishart producing such a picture as The
Awakening, 1914, a reproduction of which accom-
panies these notes (p. 56). Painted from much
the same spot as Bough’s Review picture it shows
Holyrood Park as a military encampment, with
Calton Hill as a high and impressive background.
In a bold, free style it realises the movement and
animation of the scene. Miss Mabel Dawson’s
A Message from the Front has a present-day in-
terest, in addition to being a well-composed view
of a bird-fancier’s room with an old man taking a
message from a carrier pigeon. Two young artists

“BOY putting A STONE” by Alexander carrick of Promise> Mr. Walter Hislop and Mr. John
(Messrs. Doig, Wilson Wheatley’s Galleries, Edinburgh) Munnoch, have lost their lives in the war, and