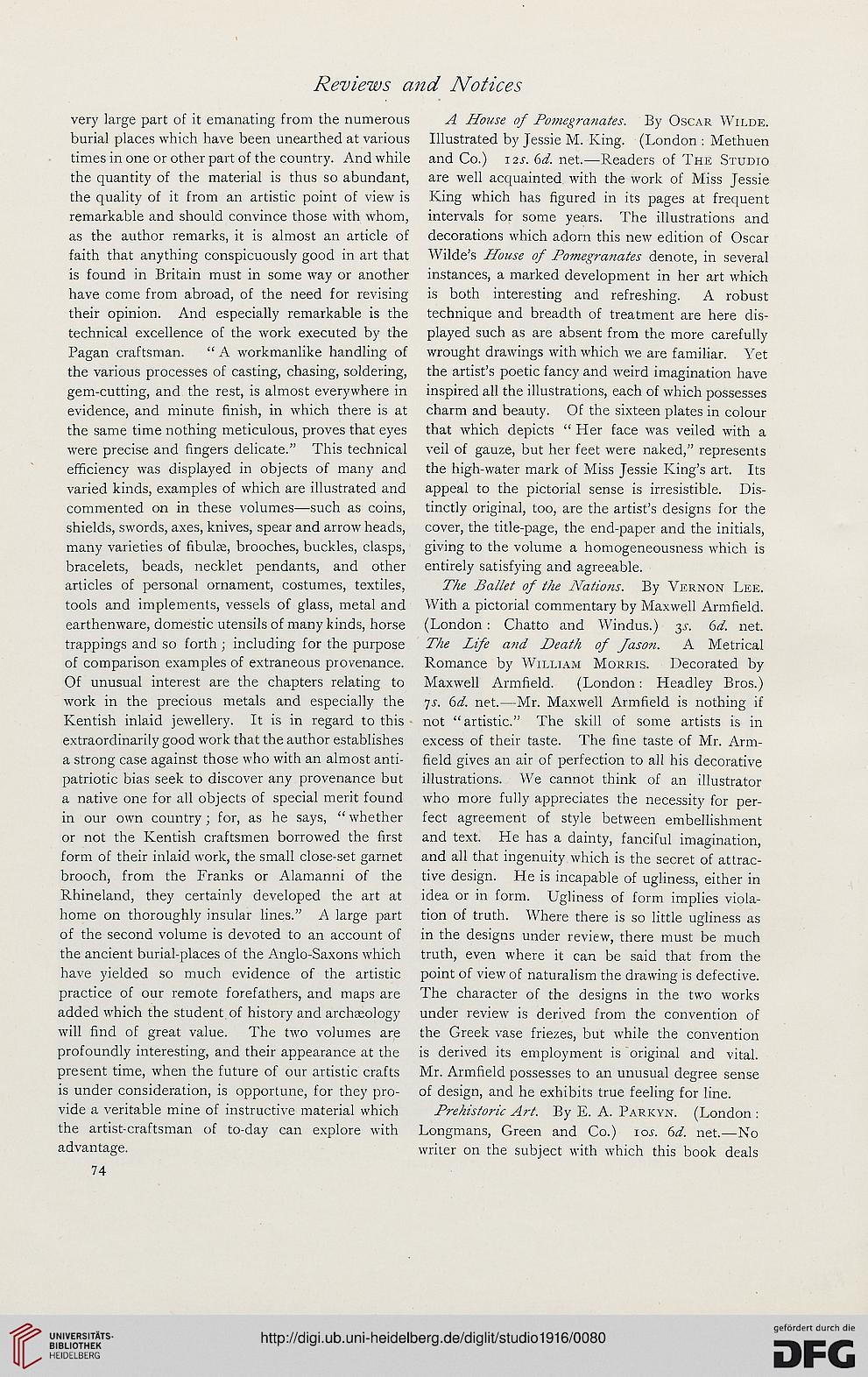 very large part of it emanating from the numerous
burial places which have been unearthed at various
times in one or other part of the country. And while
the quantity of the material is thus so abundant,
the quality of it from an artistic point of view is
remarkable and should convince those with whom,
as the author remarks, it is almost an article of
faith that anything conspicuously good in art that
is found in Britain must in some way or another
have come from abroad, of the need for revising
their opinion. And especially remarkable is the
technical excellence of the work executed by the
Pagan craftsman. “ A workmanlike handling of
the various processes of casting, chasing, soldering,
gem-cutting, and the rest, is almost everywhere in
evidence, and minute finish, in which there is at
the same time nothing meticulous, proves that eyes
were precise and fingers delicate.” This technical
efficiency was displayed in objects of many and
varied kinds, examples of which are illustrated and
commented on in these volumes—such as coins,
shields, swords, axes, knives, spear and arrow heads,
many varieties of fibulae, brooches, buckles, clasps,
bracelets, beads, necklet pendants, and other
articles of personal ornament, costumes, textiles,
tools and implements, vessels of glass, metal and
earthenware, domestic utensils of many kinds, horse
trappings and so forth ; including for the purpose
of comparison examples of extraneous provenance.
Of unusual interest are the chapters relating to
work in the precious metals and especially the
Kentish inlaid jewellery. It is in regard to this
extraordinarily good work that the author establishes
a strong case against those who with an almost anti-
patriotic bias seek to discover any provenance but
a native one for all objects of special merit found
in our own country; for, as he says, “ whether
or not the Kentish craftsmen borrowed the first
form of their inlaid work, the small close-set garnet
brooch, from the Franks or Alamanni of the
Rhineland, they certainly developed the art at
home on thoroughly insular lines.” A large part
of the second volume is devoted to an account of
the ancient burial-places of the Anglo-Saxons which
have yielded so much evidence of the artistic
practice of our remote forefathers, and maps are
added which the student of history and archteology
will find of great value. The two volumes are
profoundly interesting, and their appearance at the
present time, when the future of our artistic crafts
is under consideration, is opportune, for they pro-
vide a veritable mine of instructive material which
the artist-craftsman of to-day can explore with
advantage.

A House of Pomegranates. By Oscar Wilde.
Illustrated by Jessie M. King. (London : Methuen
and Co.) 12s. 6d. net.—Readers of The Studio
are well acquainted with the work of Miss Jessie
King which has figured in its pages at frequent
intervals for some years. The illustrations and
decorations which adorn this new edition of Oscar
Wilde’s House of Pomegranates denote, in several
instances, a marked development in her art which
is both interesting and refreshing. A robust
technique and breadth of treatment are here dis-
played such as are absent from the more carefully
wrought drawings with which we are familiar. Yet
the artist’s poetic fancy and weird imagination have
inspired all the illustrations, each of which possesses
charm and beauty. Of the sixteen plates in colour
that which depicts “ Her face was veiled with a
veil of gauze, but her feet were naked,” represents
the high-water mark of Miss Jessie King’s art. Its
appeal to the pictorial sense is irresistible. Dis-
tinctly original, too, are the artist’s designs for the
cover, the title-page, the end-paper and the initials,
giving to the volume a homogeneousness which is
entirely satisfying and agreeable.

The Ballet of the Nations. By Vernon Lee.
With a pictorial commentary by Maxwell Armfield.
(London : Chatto and Windus.) 3^. 6d. net.
The Life and Death of Jason. A Metrical

Romance by William Morris. Decorated by
Maxwell Armfield. (London: Headley Bros.)
7s. 6d. net.—Mr. Maxwell Armfield is nothing if
not “artistic.” The skill of some artists is in
excess of their taste. The fine taste of Mr. Arm-
field gives an air of perfection to all his decorative
illustrations. We cannot think of an illustrator
who more fully appreciates the necessity for per-
fect agreement of style between embellishment
and text. He has a dainty, fanciful imagination,
and all that ingenuity which is the secret of attrac-
tive design. He is incapable of ugliness, either in
idea or in form. Ugliness of form implies viola-
tion of truth. Where there is so little ugliness as
in the designs under review, there must be much
truth, even where it can be said that from the
point of view of naturalism the drawing is defective.
The character of the designs in the two works
under review is derived from the convention of
the Greek vase friezes, but while the convention
is derived its employment is original and vital.
Mr. Armfield possesses to an unusual degree sense
of design, and he exhibits true feeling for line.

Prehistoric Art. By E. A. Parkyn. (London :
Longmans, Green and Co.) roj-. 6d. net.—No
writer on the subject with which this book deals