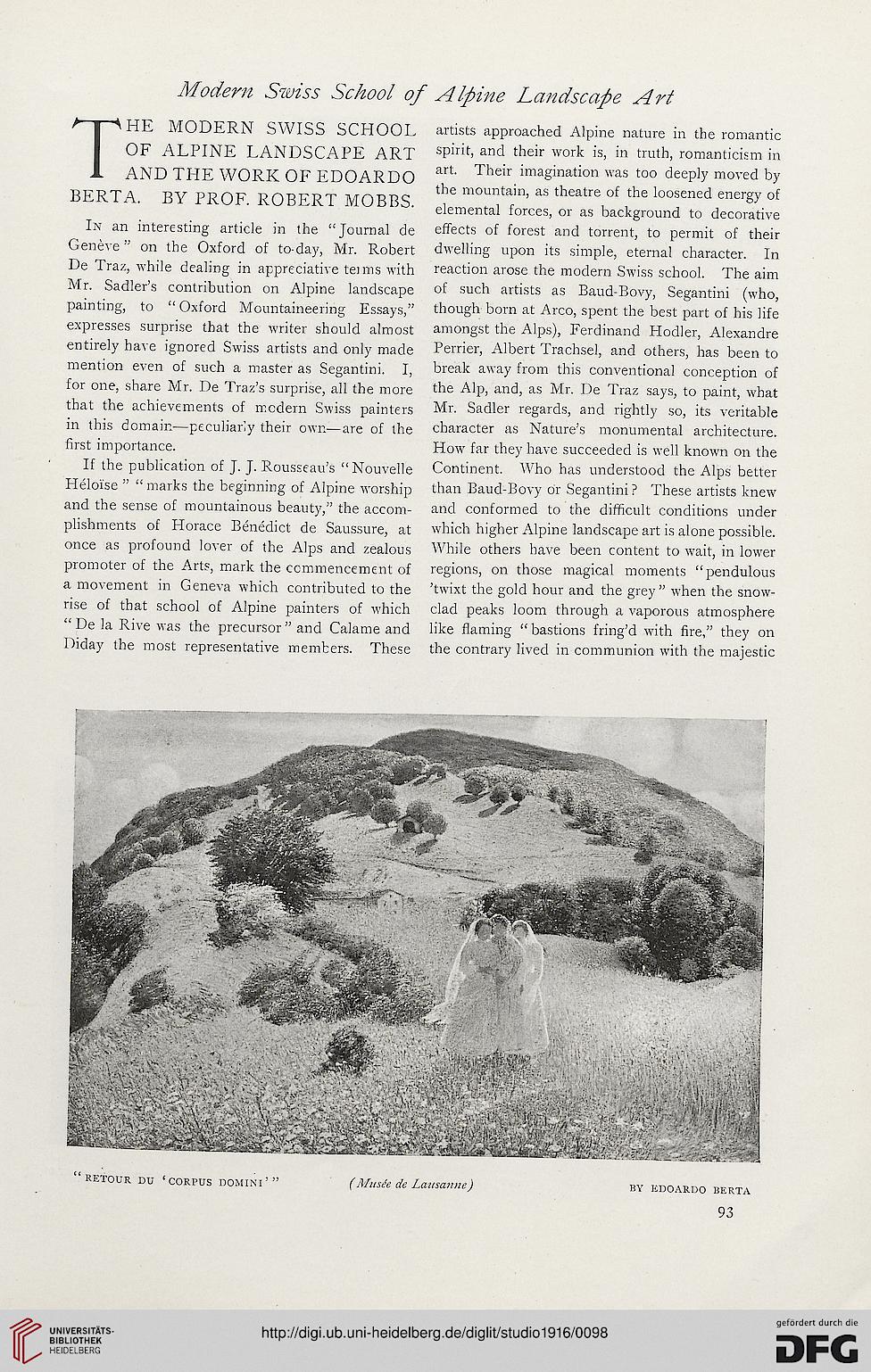 OF ALPINE LANDSCAPE ART
AND THE WORK OF EDOARDO
BERTA. BY PROF. ROBERT MOBBS.

In an interesting article in the “Journal de
Geneve ” on the Oxford of to day, Mr. Robert
De Traz, while dealing in appreciative teirns with
Mr. Sadler’s contribution on Alpine landscape
painting, to “Oxford Mountaineering Essays,”
expresses surprise that the writer should almost
entirely have ignored Swiss artists and only made
mention even of such a master as Segantini. I,
for one, share Mr. De Traz’s surprise, all the more
that the achievements of modern Swiss painters
in this domain—peculiarly their own-—are of the
first importance.

If the publication of J. J. Rousseau’s “ Nouvelle
Heloi'se ” “ marks the beginning of Alpine worship
and the sense of mountainous beauty,” the accom-
plishments of Horace Benedict de Saussure, at
once as profound lover of the Alps and zealous
promoter of the Arts, mark the commencement of
a movement in Geneva which contributed to the
rise of that school of Alpine painters of which
“ De la Rive was the precursor ” and Calame and
Diday the most representative members. These

artists approached Alpine nature in the romantic
spirit, and their work is, in truth, romanticism in
art. Their imagination was too deeply moved by
the mountain, as theatre of the loosened energy of
elemental forces, or as background to decorative
effects of forest and torrent, to permit of their
dwelling upon its simple, eternal character. In
reaction arose the modern Swiss school. The aim
of such artists as Baud-Bovy, Segantini (who,
though born at Arco, spent the best part of his life
amongst the Alps), Ferdinand Hodler, Alexandre
Perrier, Albert Trachsel, and others, has been to
break away from this conventional conception of
the Alp, and, as Mr. De Traz says, to paint, what
Mr. Sadler regards, and rightly so, its veritable
character as Nature’s monumental architecture.
How far they have succeeded is well known on the
Continent. Who has understood the Alps better
than Baud-Bovy or Segantini ? These artists knew
and conformed to the difficult conditions under
which higher Alpine landscape art is alone possible.
While others have been content to wrait, in lower
regions, on those magical moments “pendulous
’twixt the gold hour and the grey ” when the snow-
clad peaks loom through a vaporous atmosphere
like flaming “bastions fring’d with fire,” they on
the contrary lived in communion with the majestic